Last week, Amazon Prime released a new original Indian political drama. However, the streaming service and the director faced backlash over some scenes that were deemed by some Hindu nationalists as “an insult to Hindu gods.” The streaming service has now caved to the pressure and agreed to censor the scenes.

The series has also been accused of insulting the office of the Prime Minister as there are scenes in the series where a fictional prime minister is seen doing indecent acts.

The show’s director, the celebrated Bollywood star Ali Abbas Zafar, was also blasted for the similarities between some of the scenes and real-life political controversies in India.

Zafar had previously attempted to issue an apology on social media, saying that “Tandav” was “a work of fiction and any resemblance to acts and persons and events is purely coincidental.” He insisted the series was not meant to hurt anyone’s sentiments.

That did not stop the Ministry of Information and Broadcasting (yes, it’s actually called that) from summoning him Tuesday to discuss the issue. The meeting resulted in the series being edited to remove the offending scenes. It is the first time a streaming platform has edited a film due to government pressure.

“The cast and crew of Tandav have made the decision to implement changes to the web series to address the concerns raised,” Zafar wrote. “We thank the Ministry of Information and Broadcasting for the guidance and support in the matter. We once again apologize if the series has unintentionally hurt anybody’s sentiments.” 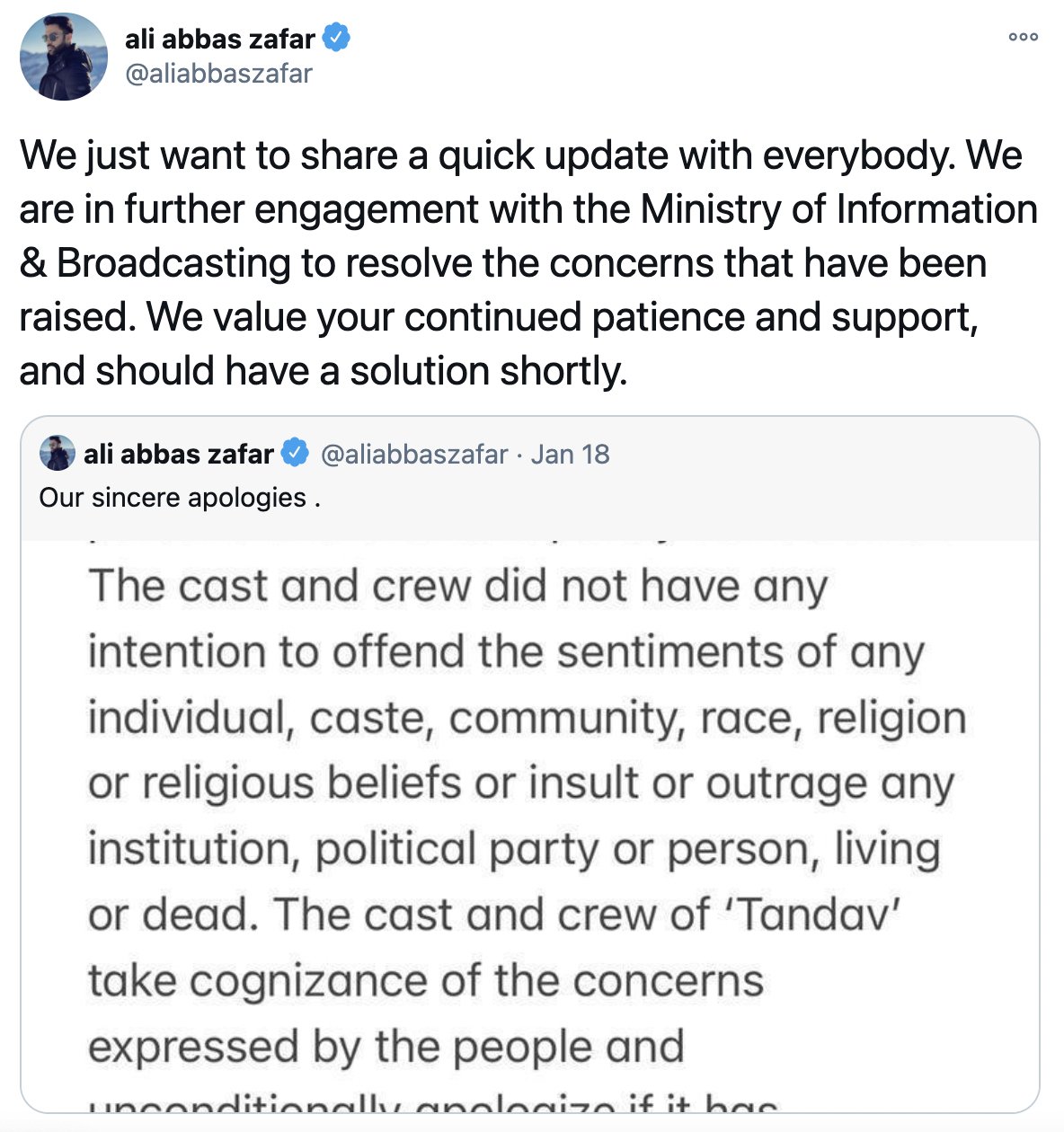 The censorship of the series is a sign of the limited creative freedom India will endure during the regime of the Hindu nationalist ruling party BJP. Last November, the government passed a law that placed streaming platforms under the purview of the Ministry of Information and Broadcasting. As a result, streaming platforms could be subjected to the same strict rules as traditional television platforms.

Among those politicians who criticized “Tandav” was Shivraj Chouhan, the chief minister (the equivalent of a governor) in the state of Madhya Pradesh. He suggested more censorship and regulation of streaming platforms.

“Nobody has the right to disrespect our gods and goddesses,” he said. “In my opinion, we need to keep a strict eye on OTT [streaming] platforms as they are showing vulgar content.”