As if we don't already have too much of a symbiotic relationship between mainstream media and Big Tech.
Share

Big tech companies, and Google in particular, with its mighty search segment coupled with massive advertising revenues, continue to rattle the traditional, corporate publishing world, who have not been able to realign their businesses in time to properly compete with the giant.

In the past, Europeans, Germans in particular, looked for ways to make Google pay them a cut of its revenues in exchange for being included in its listings.

And similar discontent has long been simmering in Australia, driven mostly by Murdoch’s News Corp, who have at various times suggested various measures to contain Google as a business competitor, including by breaking it up, and by and accusing it of undermining sustainability not only of journalism, but also, curiously, of “news” itself.

Now, we have another twist in this story, with hedge funder Heath Freeman of Alden Capital – previously dramatically described by some outlets as “the hedge fund vampire that bleeds newspapers dry” – wanting newspaper owners to band together and make Google and Facebook pay them.

For what, you are now wondering. For including making these publishers’ content visible on giant platforms and then sending traffic to their websites. Traffic, that they apparently simply can’t figure out how to monetize – other than demand that digital platforms pay them “a fair fee.”

Much of this is clear from screenshots of a letter allegedly sent by Freeman, now circulating on Twitter. 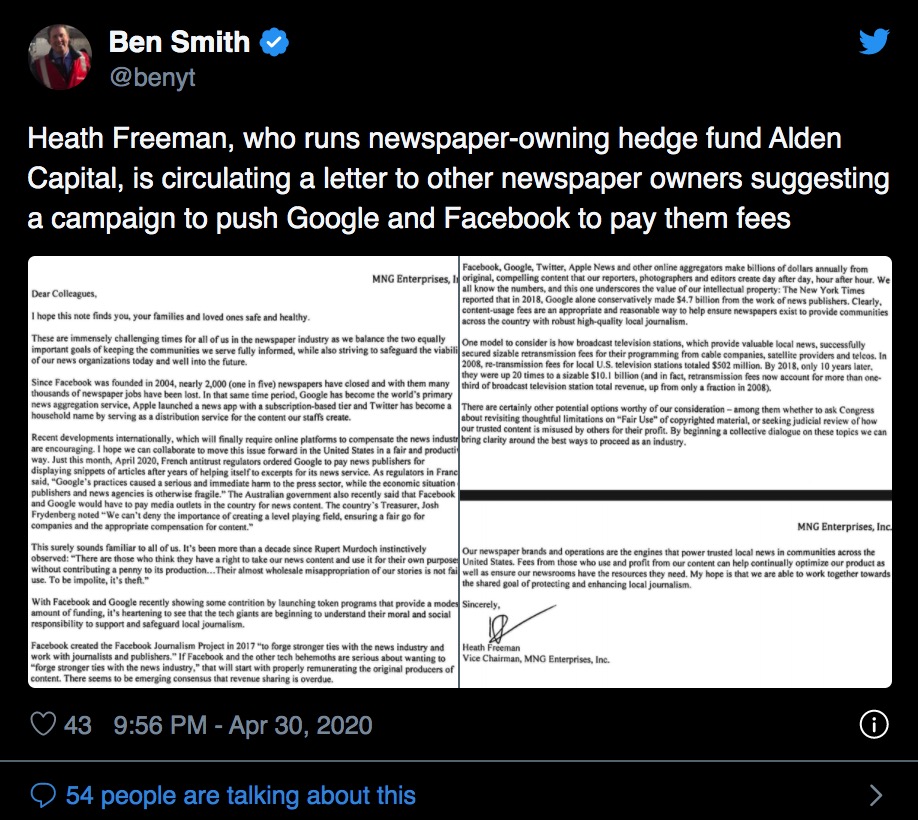 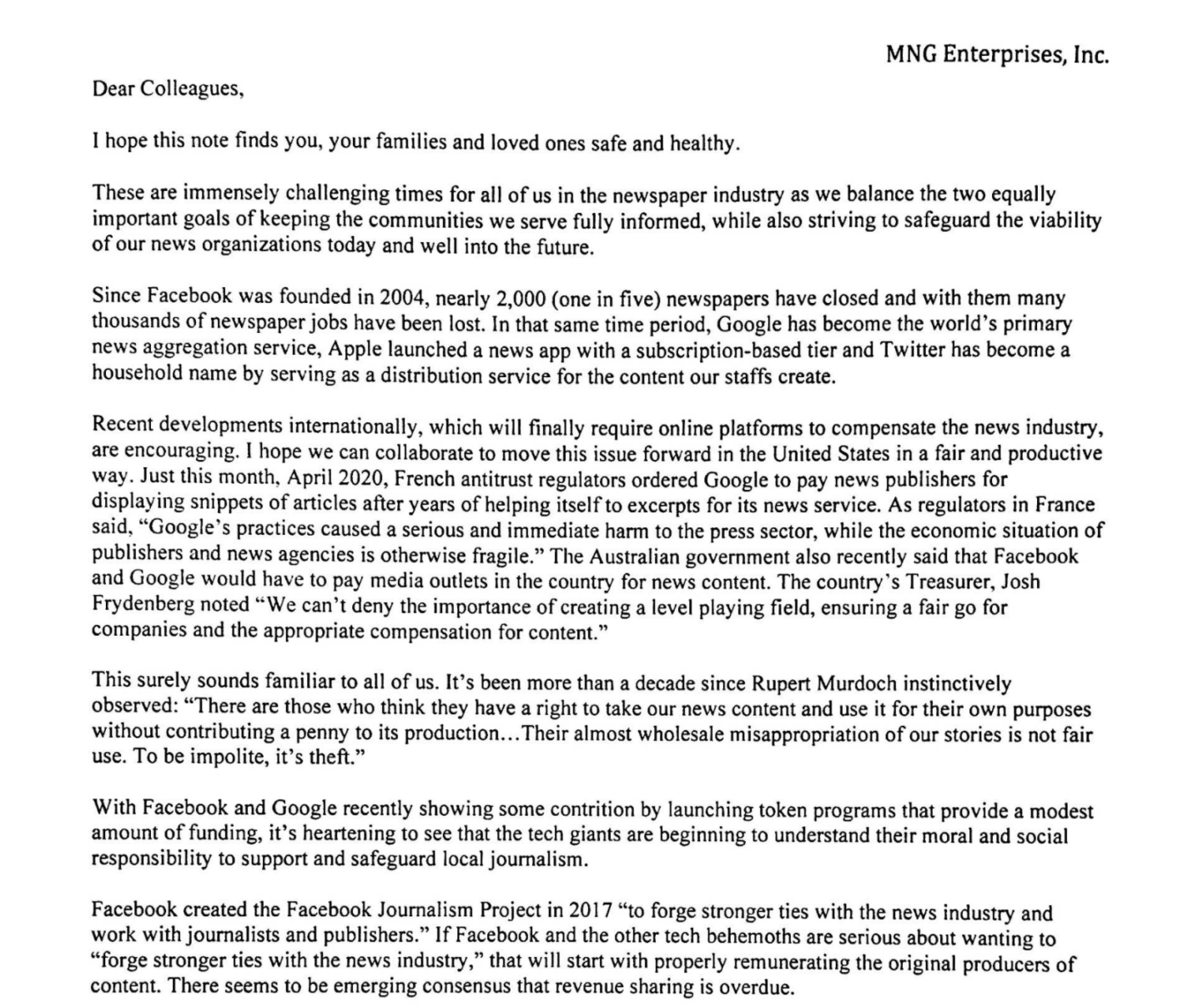 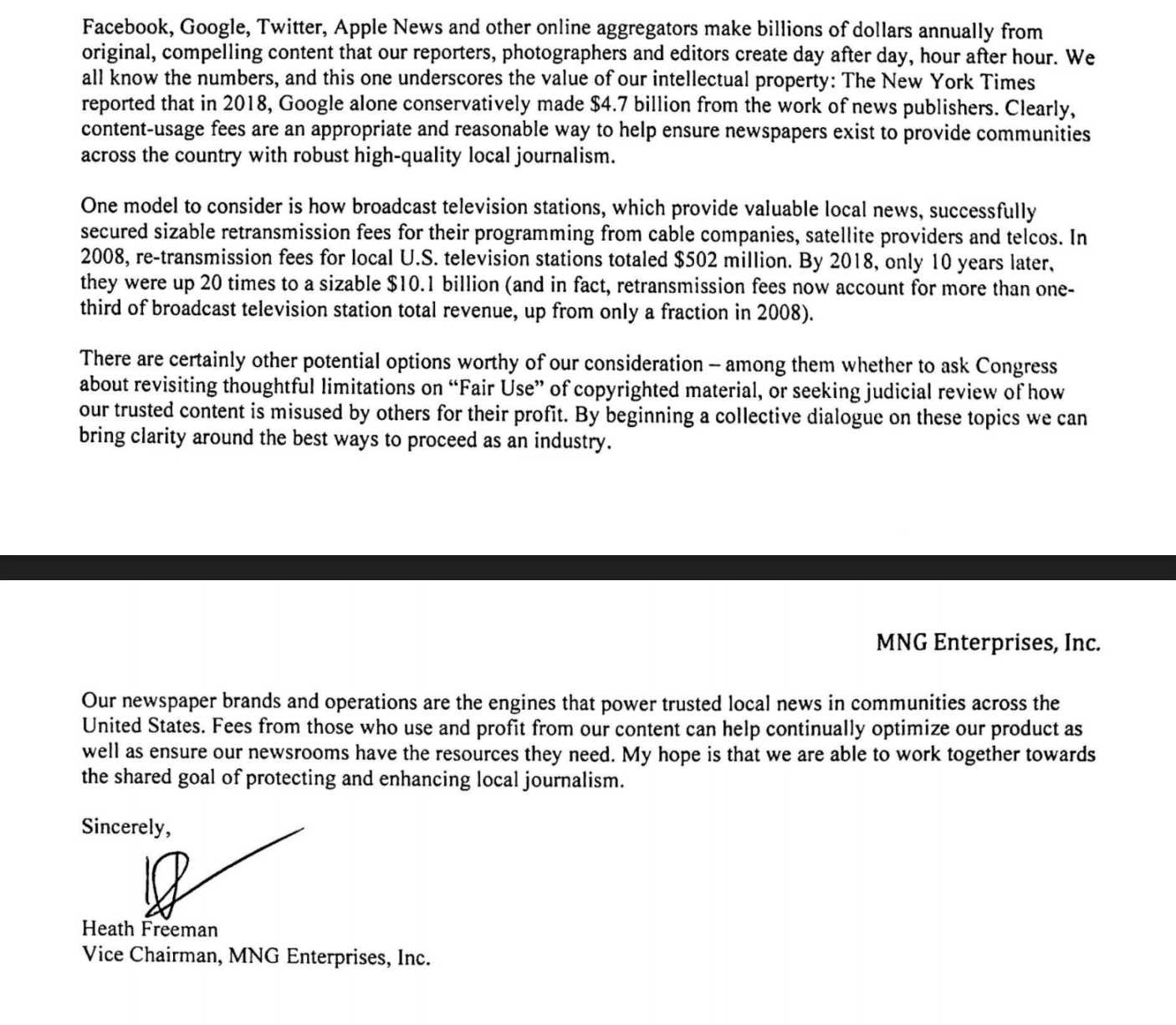 In it, Freeman says online platforms are guilty of destroying traditional newspapers, but also notes that recently, governments have become more willing to “require” these platforms to “compensate the news industry.”

(This greater “willingness” to let traditional publishers make money off of Google and Facebook in truth came mostly as part and parcel of various government’s relentless pressure on these companies, for entirely different reasons.)

In any case, Freeman now sees the light at the end of the tunnel, and the dream of “revenue sharing” with tech behemoths worth gazillions of dollars finally coming true. At least in Australia.

That’s because plans are made there to introduce a mandatory code forcing Google and Facebook to “pay for news content.”

The Australian Competition regulator is expected to publish the plan in July.