The Bloomsburg Fair has received a demand letter from over 50 LGBTQ groups over a Facebook joke that appeared to mock Dr Rachel Levine. The Pennsylvania Department of Health Secretary identifies as a transgender woman.

On Monday, the Bloomsburg Fair posted images from The Columbia/Montour Fireman’s Relief Carnival that was held over the weekend. The purpose of the event was to raise money for the fire departments serving the areas around Bloomsburg, PA – especially those who have been hurt by the restrictions posed by Dr Levine.

The images showed the food, classic cars, fireworks, and bands. The subject of controversy was the dunk tank images, which showed a man dressed like Dr Levine, and the caption, which read: 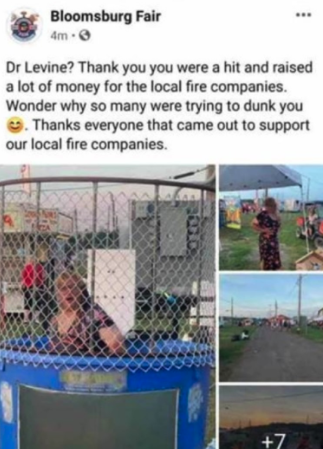 The post’s sarcasm was due to the idea that participants were dunking the lookalike out of frustration with policies Levine has enacted in the face of the covid saga.

The dunk tank participant was a male, that much was clear as he was bearded. He was made to resemble Dr Levine by wearing a dress, a blonde wig, and glasses. Organizers said that it was a “poor” Marilyn Monroe costume.

“It turned into where people thought we were offending Dr. Rachel Levine, and that was no intention at all, especially to cross-gender (people). There was absolutely none of that at all. We apologize,” Fair President Randy Karschner said. “We’ve got a lot of stones thrown at us in the last 30 hours, and we understand that because people took it the wrong way. There was no discrimination intended at all, even though that’s how it got perceived.”

Others weren’t convinced. The post, which has since been deleted, was severely criticized online, even by Governor Tom Wolf.

“These gates at the Bloomsburg Fair are open to everybody in the world,” Fair President Randy Karschner said. “But over the weekend we had a carnival, and there was a dunk tank there, and it went from a good fundraiser and it turned out to be a social media nightmare for us, and we apologize for that.”

Some LGBTQ activist groups decided to send a demand letter to Bloomsburg Fair, demanding an apology on behalf of Dr Levine. The letter was forwarded by the Pennsylvania Youth Congress and signed by other groups such as Queer NEPA and NEPA Rainbow Alliance.

Apart from an apology to the doctor, the letter also boldly demands that Bloomsburg Fair should:

• Donate the same amount raised at the dunk tank to transgender inclusivity education programs in Columbia County.
• Include an LGBTQ non-discriminatory policy on its website.
• Conduct LGBTQ awareness training for all its board and staff.
• Support LGBTQ non-discrimination efforts across the state.
• Commit a complimentary vendor space in the next two fairs to be used as an LGBTQ resource center.

“Transphobia is not a good image for community events including the Bloomsburg Fair, and many businesses throughout Pennsylvania understand that,” the activists wrote in the demand letter. “Our organizations represent tens of thousands of LGBTQ Pennsylvanians, and we are demanding that the Bloomsburg Fair take decisive corrective action in apologizing for your significant anti-transgender events this past week. Anti-transgender actions are not a Pennsylvania value.”