The reporter caused brands to pull their association with King.
Share

Carson King was unknown to the public until he appeared on ESPN’s College GameDay when he became famous for holding a sign that asked for money to buy beer. He shortly afterward became known as the “Iowa Legend” when he decided to donate all the funds to the University of Iowa’s Stead Children’s Hospital, raising more than a 1 million dollars in the process.

Everything started as a joke then went viral. King appeared briefly on television holding an improvised sign that read “Busch Light Supply Needs Replenished” followed by his Venmo nickname. Unexpectedly, money started pouring in his digital wallet and, when he reached $600, he announced to his family that he would be donating the money to the children’s hospital in Iowa City.

One thing led to another and his story started catching attention on social and national media. Even Busch Light and Venomo themselves promised to pledge money to his cause. Soon afterwards, other companies decided to jump on the bandwagon and contribute to the cause, namely Prairie Meadows Casino and DeWitt Construction, where Carson King and his brother work, respectively.

Eventually, the sum reached 1 million dollars and, by September 23, King became a celebrity, appearing on shows like Good Morning America, NBC News, and even CNN. Busch Light even went as far as providing the Iowa Legend with a year worth of beer branded after King himself.

However, King’s newly acquired fame would bring its share of troubles after news outlet Des Moines Register reported on the topic. The problem is… the report contained what Des Moines Register calls a “routine check”, and by that, they mean digging up his old tweets in order to find anything controversial that could shatter King’s persona of “Nice Guy”.

Seek and you shall find. A trending news reporter at the Register (which name won’t be disclosed in this post) delved into King’s backstory and social media history, which brought out 8-year-old tweets containing “offensive” jokes.

The jokes in question won’t be repeated here, but suffice to say that these were aimed at black people and, when questioned about it, Carson King apologized and said that they made him feel “sick”.

It’s also worth mentioning that by the time of those tweets, King was nothing but a 16-year-old High School student with an “edgy” sense of humor.

These couple Tweets, of course, were deleted, and King reflected on how what he thought to be funny when he was a teenager, is no longer funny as a grown-up man.

By now King has publicly apologized through several mediums, but regardless, consequences were inevitable.

On September 24, Anheuser-Busch, the parent company of Busch Light, announced the end of the association with Carson King. They will still honor their agreement to pledge funds to the University of Iowa’s Stead Children’s Hospital though.

King said on Twitter that he did not blame the newspaper and actually thanked them for their extensive coverage of him.

Nonetheless, cancel culture is something that goes both ways, and by that, we mean that the reporter who dug up King’s Tweets is also facing its fair share of criticism online, since critics also found controversial things when searching among his old tweets.

Specifically, between 2010 and 2013, the reporter working for Des Moines Register newspaper mocked black people and the legalization of same-sex marriage.

The reporter apologized for the statements and had to lock his Twitter account shortly after the tables had been turned on him.

"Carson King had multiple social media posts that do not align with our values as a brand or as a company." @BuschBeer you do realize your beer makes people do shit all the time that doesn't "align" with your brand or company?

What’s happening with #CarsonKing is a prime example of our culture today…. constantly and intentionally looking for the bad when there’s so much good to share. Most of ya’ll better be glad social media wasn’t around when you were 16.

A Des Moines Register reporter digs up tweets of a 16 year old Carson King – the dude who raised $1 million+ for child cancer – and prepares to expose him.

The internet does their own digging on the reporter and guess what they find? https://t.co/uDsB2wbI1j pic.twitter.com/nZ1bujXmW9

If Carson King had been defiant about the two tweets from when he was 16 or doubled down, I would get why the Register would mention them but according the paper, he was deeply remorseful. I fail to see how it was newsworthy, especially given the good work he’s been doing 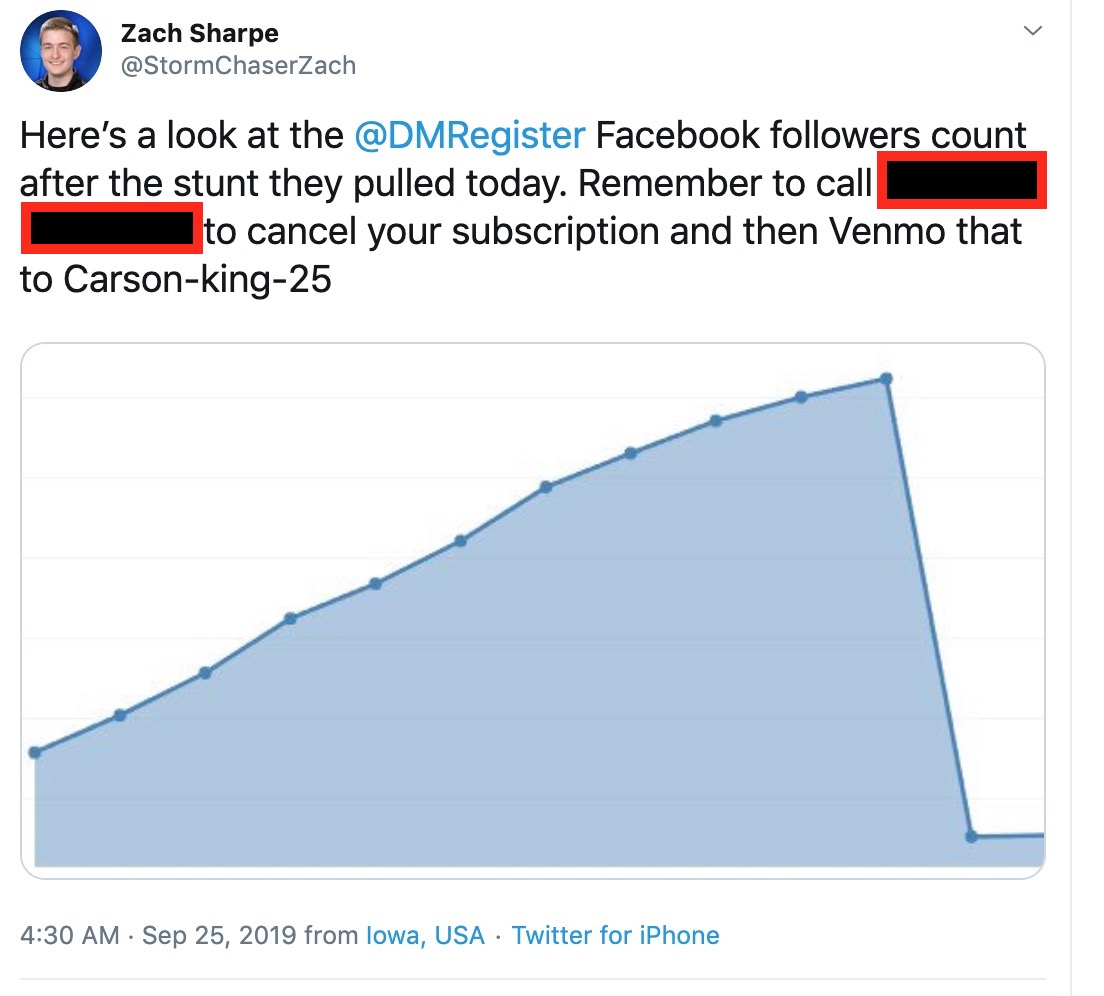 When the newspaper itself questioned the decision to include King’s offensive Tweets on the coverage about him, the paper’s editor in chief said that these jokes should be acknowledged to all the people that donated money to his cause or that are planning to.