But the group is accused of virtue signaling as it didn't disclose its significant Amazon shares.
Share

The Chicago Union of Teachers has tweeted that it supports the protesters outside tech billionaire Jeff Bezos’ home who built a guillotine. The tweet was somewhat ironic, considering the union has tens of millions of dollars worth of Amazon shares.

“We are completely frightened by, completely impressed by, and completely in support of wherever this is headed. #Solidarity,” the union wrote in a tweet.

We are completely frightened by, completely impressed by and completely in support of wherever this is headed. #Solidarity https://t.co/IfsQgJaD1z

The protest came after Bezos became the first person in the world to have a net worth of $200 billion on Wednesday, Aug 26. The following day, protesters, who included Amazon employees who were demanding a $30 per hour minimum wage, gathered outside his Washington DC home.

The protest made a surprising turn over the following days when demonstrators built a guillotine.

“As a taxpayer in Chicago, I am disgusted that you would support and encourage this behavior. As educators, you should know better. You should know where this ideology is leading us. You should not be involved in the education of our youth,” someone replied.

“As a CTU member and a major critic of global wealth inequality, I am definitely not comfortable with this endorsement by the union,” said another.

Another user wrote, “As someone left of center living in Chicago area, I add my voice to the idea this tweet supporting the direction of using guillotines is stupid, scary, dangerous, & wrong in every possible way. Whomever posted this for CTU should immediately lose access to their Twitter account.”

The Illinois Policy, an organization that helps develop public policies to promote prosperity and personal freedom, responded by reminding the CTU that they are beneficiaries of Bezos’s wealth. 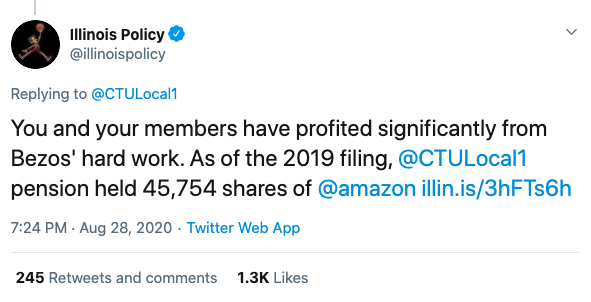 “You and your members have profited significantly from Bezos’ hard work. As of the 2019 filing, @CTULocal1 pension held 45,754 shares of @amazon.”

The organization provided a link to the Chicago Teachers Pension Fund’s 2019 annual financial report that proves the Chicago teachers profited a lot by investing in Amazon shares and suggested that the organization was merely virtue signalling.