Twitter was used this week by a CNN contributor to expose personal information of Alex Nester, a young reporter with the Washington Free Beacon, and cause an online mob to harass Nester by posting her phone number.

The doxxing was done by Asha Rangappa, who also teaches at Yale. Rangappa’s action came as apparent retaliation for Nester – who is an intern at the media outlet – attempting to do her job and ask some questions.

The case revolves around former South Carolina governor and America’s UN ambassador Nikki Haley, a Republican and an Indian-American who has recently come under heavy criticism from liberals for conforming to America’s supposed racist norms.

Blasting out an INTERN'S cell phone.

Specifically, she has been “accused” of changing her first name – falsely accused, as it turns out, since “Nikki” is her actual middle name. Among those piling on against the conservative politicians for this reason was Rangappa. After what’s described as her “unkind comments” about Haley following the latter’s Republican National Convention address, Alex Nester discovered that Rangappa goes by her middle name.

Nester then emailed for comment, asking if it was inappropriate to imply that the US is a racist country because Haley goes by her “more easily pronounceable” middle name – while Rangappa (hypocritically) does the same.

This apparently enraged Rangappa so much that she decided to post a screenshot of the email, complete with the reporter’s email address and phone number. To make matters worse, the CNN contributor also told her 600k followers on Twitter to “feel free to respond to Alex.” 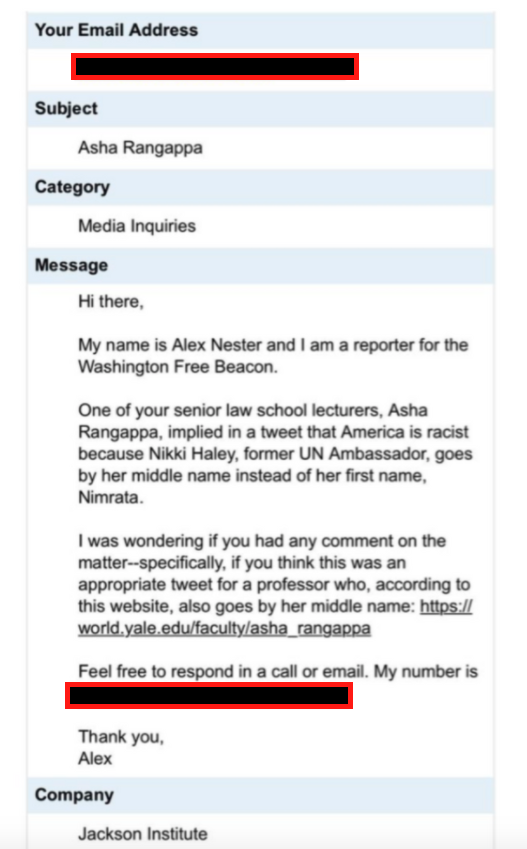 Some of the responses suggested that the phone number would be used to harass Nester (“Any time zone, it doesn’t matter day or night. Call Alex,” tweeted one user) in order to “have some fun.”

The original tweet that Rangappa posted has since been deleted – but not because she saw anything wrong in exposing Nester’s personal information in this way. The violation of the social network’s rules was so egregious that even Twitter had no choice but to react and force Rangappa to remove the tweet. 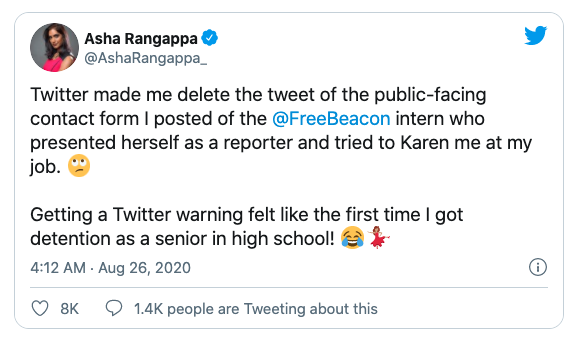 The CNN contributor remained unrepentant and apparently oblivious to the dangers of doxxing in her further tweets on the subject, (again) falsely implying that Nester may not be a real reporter, and describing the Twitter warning she received “like the first time I got detention as a senior in high school.”