The GitHub repository isn't holding any of Crunchyroll's material.
Share

The code for the tool that allowed videos to be downloaded from streaming service Crunchyroll has been removed from the GitHub repository after the Microsoft-owned platform received a complaint alleging it was somehow infringing copyright.

Crunchyroll Downloader is a download manager created in late 2019, Torrent Freak reported, by the German student Tim Schneeberger, which, as its name suggests, allowed the download of videos from the platform.

What started as a “for fun” project soon became the best companion for Crunchyroll users. Schneeberger, better known as ThePBone, managed to create an open-source API that extracted video files from the server, saving users the hassle of turning to pirate sites to download local copies of anime.

The problem is that Crunchyroll natively does not have an option to download the series or movies. The platform has a free plan, but those who want a decent experience must purchase a Premium subscription that gives them access to content in HD and Full HD quality, as long as they are connected to the internet.

Although ThePBone included in the application a note stating that it should not be used for downloading content to which the user does not have the rights, this is not enough to prevent its misuse. This is why MX International filed a copyright complaint against GitHub, the repository where the app was located.

But it’s worth pointing out that the tool itself doesn’t contain any copyrighted material – neither does the code on GitHub; no more than a how DVR is used as a tool to create a local copy of a movie or a TV show episode.

The complaint demanded the immediate removal of the app, in addition suggesting that legal action being taken against ThePBone. 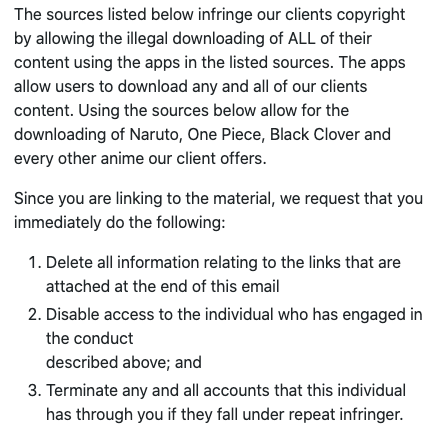 “The sources listed below infringe our clients copyright by allowing the illegal downloading of ALL of their content using the apps in the listed sources. The apps allow users to download any and all of our clients content. Using the sources below allow for the downloading of Naruto, One Piece, Black Clover and every other anime our client offers [sic],” it says.

However, this complaint is strange. The document sent to GitHub is inconsistent, indicating that they (GitHub) do not have the rights to download Crunchyroll’s content, which doesn’t even make sense because the Microsoft-owned service does not download anything; they only host code for the tool.

Additionally, the complaint does not include any evidence that demonstrates the improper use of the tool, nor does it indicate specific cases of infringement (why is required for a DMCA complaint). Finally, nowhere in the document is it specified that it is a DMCA complaint, but is inferred because it was sent to GitHub’s DMCA department.

GitHub decided to remove Crunchyroll Downloader from the platform, but they have not met the other demands. They even offered ThePBone the opportunity to refute it, but he indicated that he will not, as he won’t be hosting the project there in future anyway.