Facebook and its Oculus VR have been very busy in recent weeks proving all those warnings that going digital with gaming and associated Big Tech might turn into a future minefield they will have to navigate.

This is significant because standalone Oculus accounts are being phased out in favor of merging them with Facebook accounts, and starting in 2023, Oculus accounts will be gone.

Facebook users who delete their account at the same time lose all their games, purchases and progress. 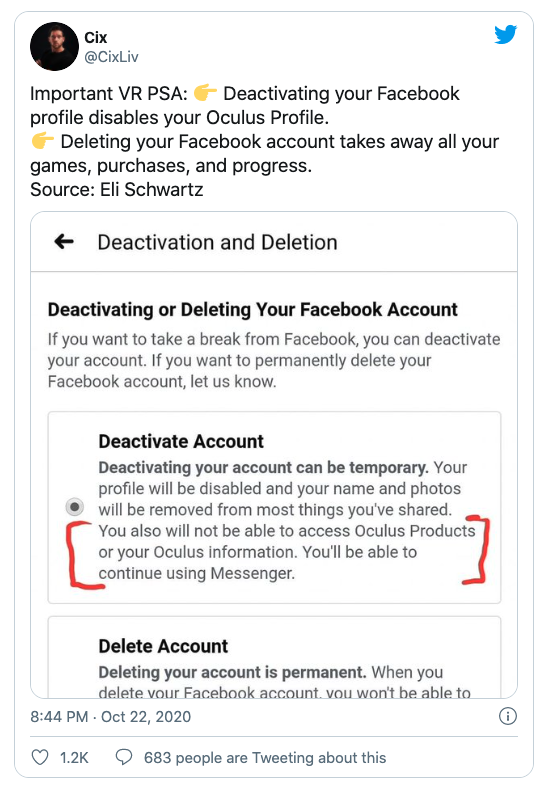 Users are being informed of this policy change when they reach the Facebook account deactivation and deletion page, which spells out that Oculus Products and Information (i.e., games and progress, app purchases, achievements, and store credits) will become inaccessible in case the Facebook account is deleted.

Facebook is advising gamers who have the original Quest, Rift or Rift 2, have not linked their Oculus and Facebook accounts yet and don’t intend to buy new headsets, that their purchases are safe even if they delete their (unlinked) Facebook accounts.

This news comes on the heels of another, related massive controversy, when users who decided to merge Facebook accounts – something announced as an obligatory step last summer – faced technical problems when they attempted to do that.

The issues arose on October 13 with the release of the Quest 2 system, which requires the account merging. Many of those who left Facebook a long time ago for different reasons were now forced to once again create an account just to be able to use Oculus – and reportedly, it is these new or returning users that were most likely to see their hardware effectively bricked as Facebook inexplicably immediately disabled these accounts.

That’s despite the fact they provided detailed personal information, plus photo ID. As user thespieler11 described it on Reddit, they were reluctant to come back to Facebook but bit the bullet in order to be able to play using Quest 2 – only to wind up with “a $300 paperweight until someone from Facebook decides the fate of VR for me.”

Head of Facebook VR Andrew Bosworth commented last week, “People should continue to make sure their Facebook accounts are in good standing before they buy the headset,” adding, “They can work through those problems before they do it.”