Google Stadia Creative Director: Streamers should buy a license from developers and publishers to stream games

Streamers have been the driving force behind the success of several indie games. Under this proposal, they'd have to hand over a cut of their revenue to developers to stream games.
Share

Google Stadia Creative Director Alex Hutchinson is proposing that streamers in the gaming space should be “buying a license” and “paying the developers and publishers of the games they stream.”

Hutchinson made the comments in a tweet thread in response to the recent mass Digital Millennium Copyright Act (DMCA) crackdown on Twitch. Many streamers were frustrated with Twitch’s handling of the situation because clips where they played background music several years ago are now being flagged but Twitch isn’t letting streamer know which clips are allegedly violative so that they can review or remove them from their back catalogs.

But Hutchinson had little sympathy for the streamers and tweeted:

“Streamers worried about getting their content pulled because they used music they didn’t pay for should be more worried by the fact that they’re streaming games they didn’t pay for as well. It’s all gone as soon as publishers decide to enforce it.”

He then followed up by proposing that streamers should have to pay a licensing fee to developers and publishers of the games they stream via revenue sharing. 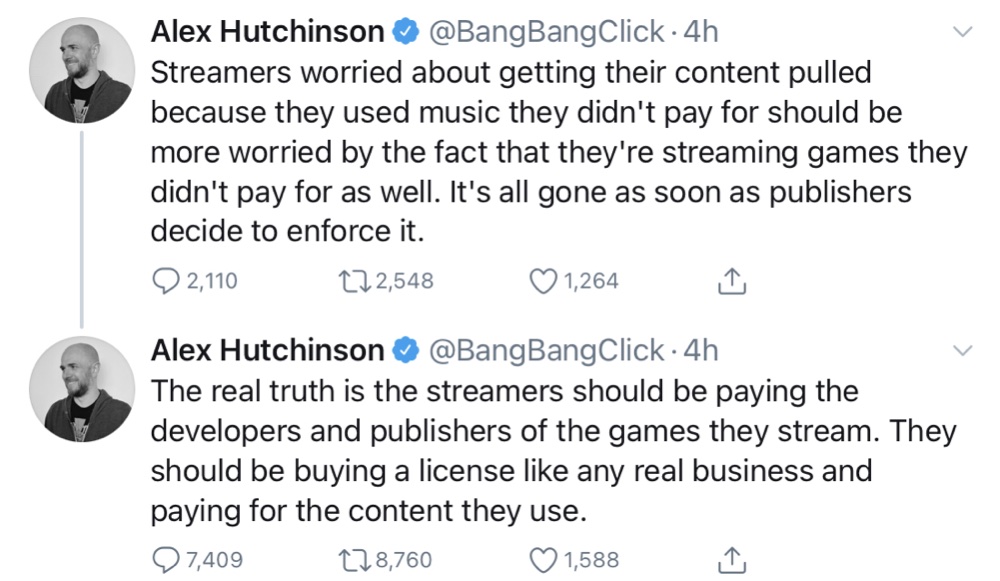 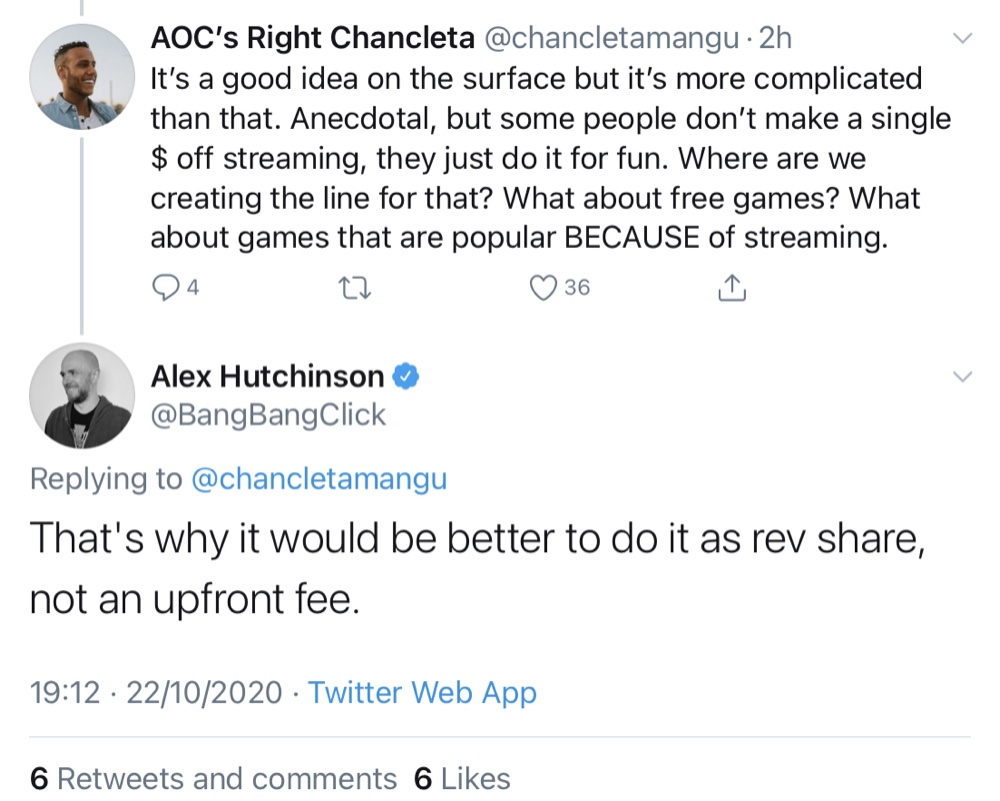 Not only did Hutchinson suggest that streamers should have to buy a license to stream games but he also tweeted that a model where “only ‘approved’ streamers are allowed to monetize video game streams” is one way this licensing system could be implemented. 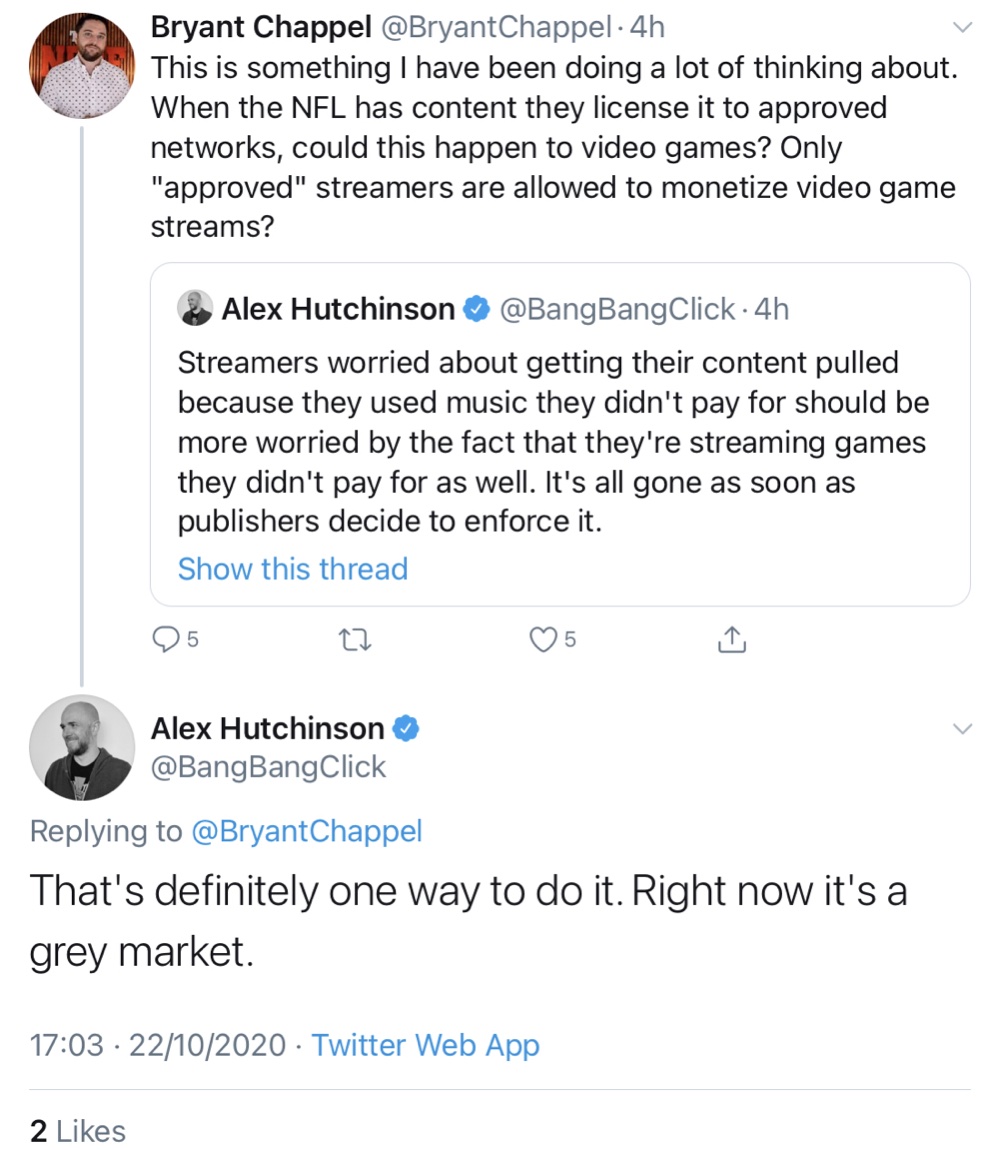 Hutchinson added that under his proposal, “games media that reviews or covers games” wouldn’t have to pay this licensing fee but streamers would have to pay because they’re “essentially ‘performing’ the game” and “using far more than fair use law covers.” 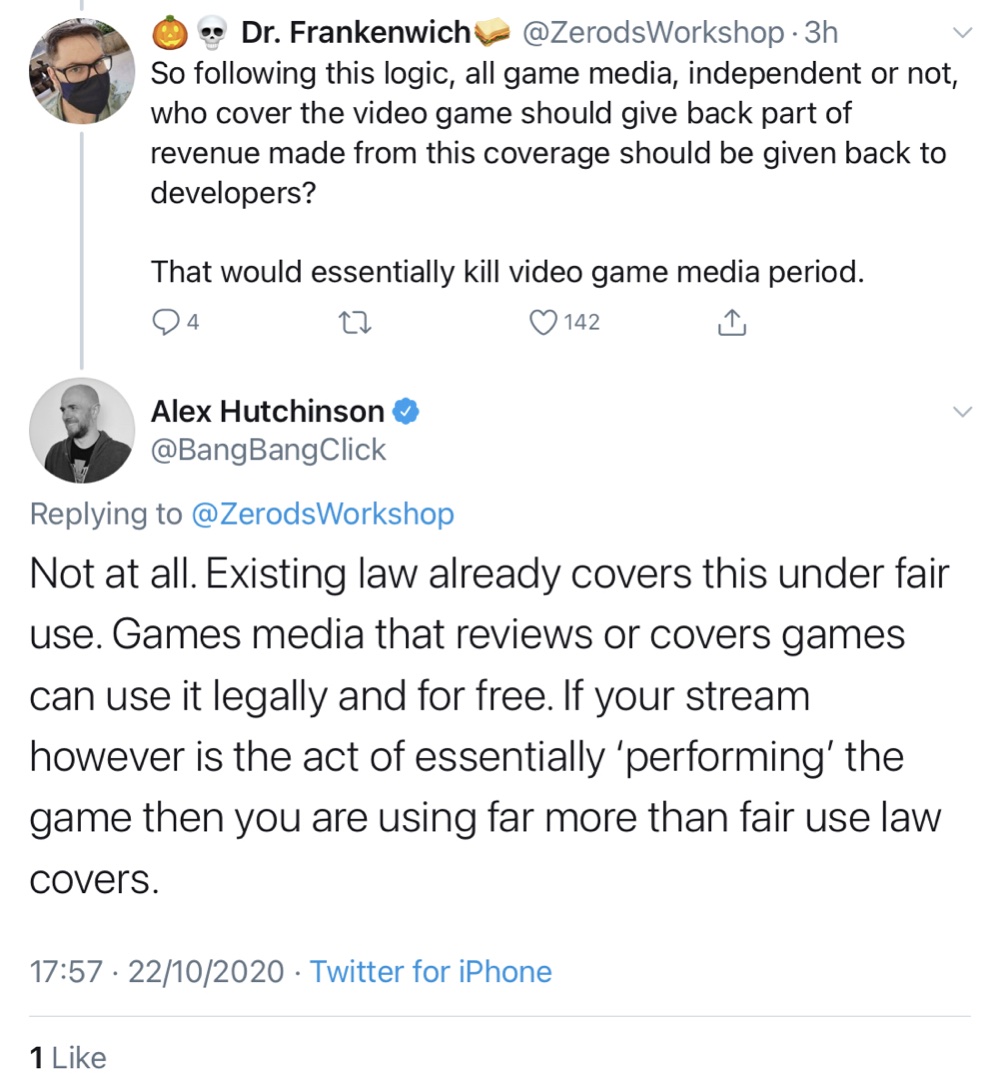 Many indie games that have struggled to gain exposure have ultimately succeeded because of the coverage and free marketing provided to them by streamers.

One recent and iconic example of this is the survival game Among Us which its developers admit “didn’t release super well” when it launched in 2018 but became a huge hit earlier this year after streamers popularized the title.

Most publishers and developers also explicitly allow their games to be streamed in their end-user license agreement (EULA). Some even pay streamers to stream their games.

“Most of the time, playing the game just helps the streamer,” he tweeted. “People tune in to watch their ‘show’ which is built on content they didn’t pay for. If their show requires game content, then a percentage of their revenue should go to the game they used.” 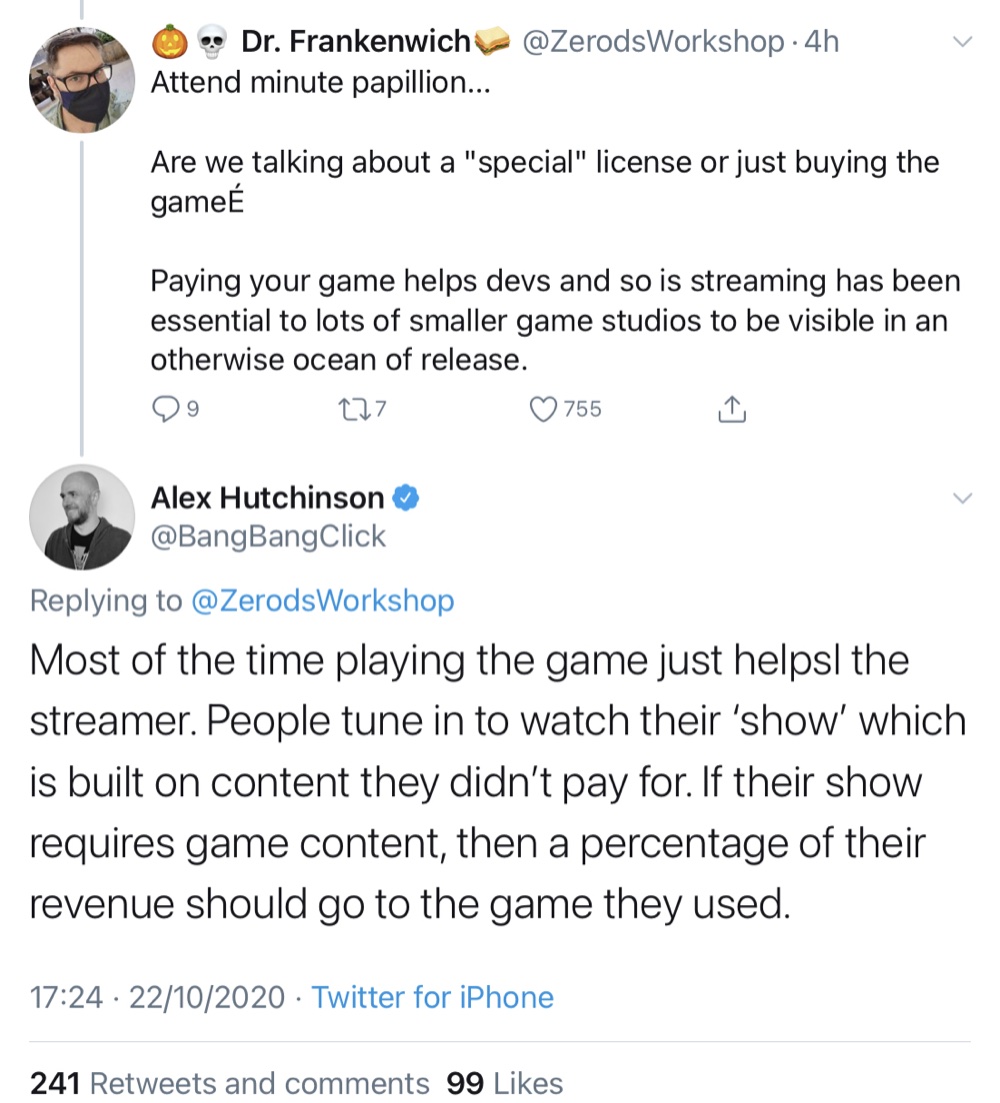 Hutchinson added that any examples of streamers helping a game to succeed are “anecdotal, not factual” and that “streamers aren’t “promoting the game” but instead running a business that “may also sometimes promote the game.” 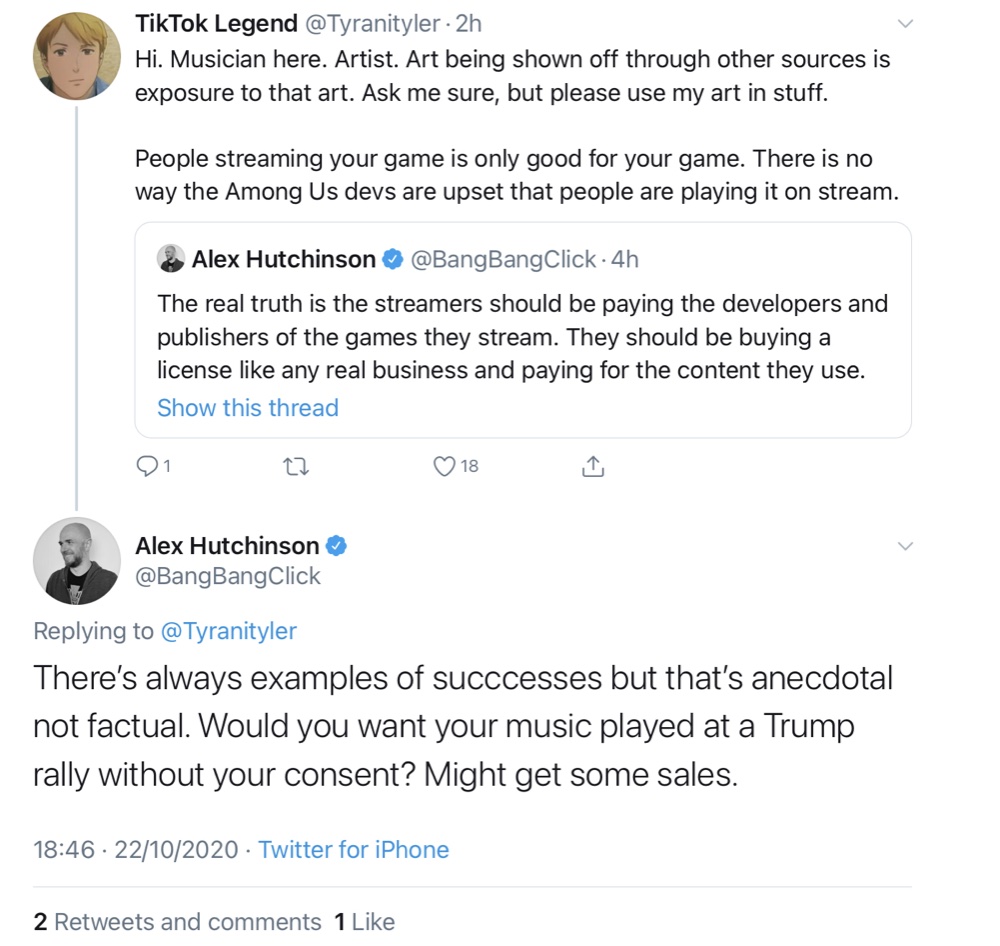 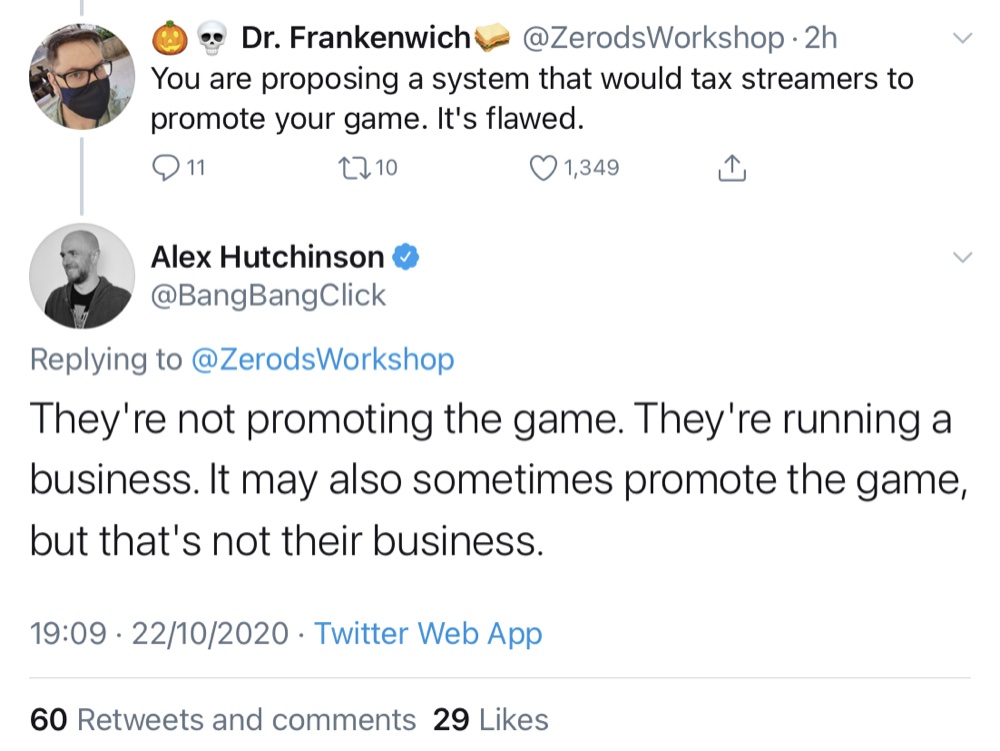 Creators and streamers already face lots of challenges when growing and running their business such as censorship, suppression, and demonetization. Forcing them to pay an additional cost in the form of a license for the games they stream would create another hurdle that makes it even harder for gaming-focused creators and streamers to succeed.

Not only do Hutchinson’s comments downplay the value that streamers provide when playing games on stream but they also seem to ignore the frustration creators and streamers already experience when Google attempts to tightly control when and if they’re allowed to earn revenue via the YouTube Partner Program.

Stadia’s tight integration with YouTube and release of exclusive features for creators that stream Stadia games via YouTube has been positioned as a way to reduce the barriers to streaming games.

But these proposals would create more friction for streamers and creators in the gaming space.

Stadia has struggled to maintain enthusiasm in the gaming community with gamers taking issue with the service’s lack of features, games, the absence of prompt communication from Google regarding Stadia updates, and the lack of 4k resolution on some games.

Concerns have also been raised about the possibility of the tech giant Google suddenly cutting off Stadia users from their games library and shutting down their accounts at any time for terms of service violations – a practice that YouTube creators and Google Play developers are all too familiar with.