On Saturday, Joshua Benton of the Nieman Journalism Lab took to Twitter to declare the end of the media. But before you get too excited – he only meant the end of the usefulness of the term. The existence of the media as a single entity, as far as Benton is concerned, is fake news.

The motive for this odd attack on a word is, somewhat predictably, the desire to maintain the status of the media as the holy cow that cannot be touched or criticized.

Hank Green – a YouTuber who founded VidCon, to then sell it to Viacom – chimed in to narrow things down and say that YouTubers in particular complaining about the media are simply playing the victim. 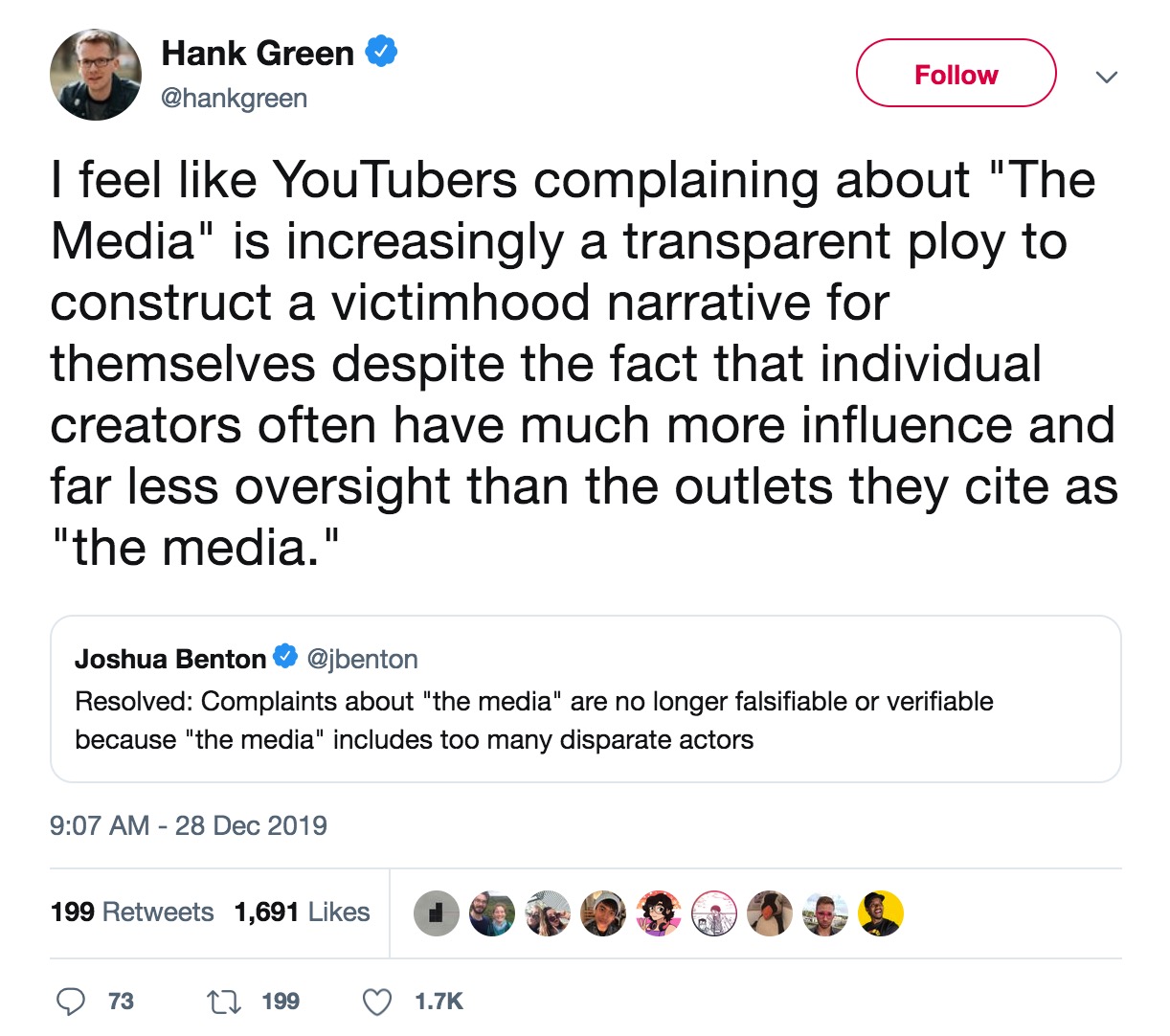 “It’s increasingly a transparent ploy to construct a victimhood narrative for themselves despite the fact that individual creators often have much more influence and far less oversight than the outlets they cite as ‘the media’,” Green tweeted.

But he quickly announced he was deleting that tweet, asserting that he tried “to not make it about anyone in particular but instead made it too vague.”

I'm deleting this tweet because I tried to not make it about anyone in particular but instead made it too vague. Just remember that "The Media" is a nonsense term mostly used to create a single, solidified villain out of a bunch of things that completely different from each other

However, Green doubled down his original sentiment, and using inverted commas with the term looks like it’s here to stay:

“Just remember that ‘The Media’ is a nonsense term mostly used to create a single, solidified villain out of a bunch of things that completely different from each other,” he wrote.

And while many commenters agreed with both Benton’s and Green’s arguments, others pointed out that the media the two are apparently trying to protect from criticism is really corporate, mainstream, old media “comprised of networks and big money” that is still given an advantaged position on YouTube over the native talent – for instance, as YouTube prefers “authoritative” sources.

Others called out the nonsensical nature of what seems to be the primary argument – that the term is too broad to mean anything, as if the same couldn’t be said of any other group, such as politicians or athletes.

Green’s original claim, in particular, that creators “often” have much more influence and far less oversight than the media rang particularly hollow for some commenters.

One Twitter user turned Green’s post on its head – just replace the word “YouTubers” with “MSM” and claim that mainstream media are playing the victim in the face of criticism coming from YouTube – despite having far more influence and resources.

Another Twitter user suggested applying inverted commas to the word “algorithm,” too, and invalidating it as a term – or at least, the implication seems to be, as a term not really representing what most people think it is.

Those who supported Green’s stance said YouTubers were clinging to a culture of victimhood, wanting to avoid accountability – something that many in the mainstream media are actually trying to do, in the face of alternatives that are shining a light on their tactics.