Australian university student Drew Pavlou announced on Twitter that he has gained the attention of none other than the Chinese Communist Party (CCP) media outlet, the Global Times. 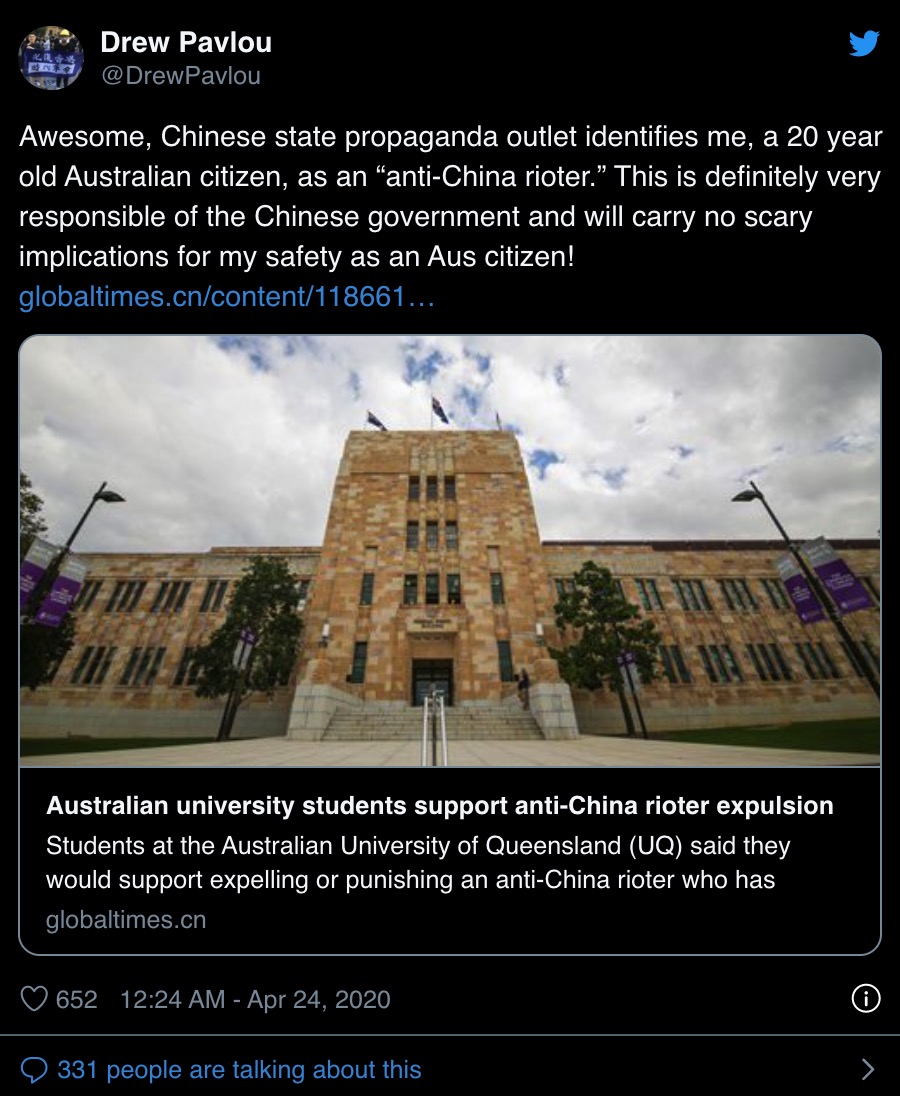 Pavlou, who has recently been threatened by action all the way up to expulsion by his university in the Australian state of Queensland, for his activism against alleged corruption at this educational institution, and its ties with China and its influence, seems to be equal parts happy and concerned about the development.

On the one hand, as Pavlou says in his tweet, his designation by the tabloid Chinese newspaper controlled by the CCP as “an anti-China” rioter is not exactly a mature act by the Chinese authorities toward a 20-year-old Australian citizen.

Pavlou also seems to think that the superpower’s media sights being drawn at him in this way might have sinister implications for his safety.

He also seems to make accusations against his university, UQ, and shares that he fully anticipates “the onslaught of death threats I will receive because you decided to give genocidal dictatorship ammunition to attack your own student.”

Pavlou also suggests that the University of Queensland might get “extra funding” for its Confucius Institute should he “disappear” in the fog of this local controversy.

Pavlou’s comments on Twitter came as he retweeted a Global Times piece saying that UQ students would support “expelling or punishing an anti-China rioter,” i.e., himself, for his actions at campus that are said to have disturbed order and incited anti-Chinese racism.

According to the Chinese state media mouthpiece, Pavlou’s protests had a penchant for supporting secessionist movements and became extra-sensitive subjects for Beijing. Forget about accusing China about letting a virus escape a lab and infect the whole world.

In the heavily globalized world – which China officially ardently supports, and which has benefited that country immensely so far – it turns out that sovereign national borders are still valued far more than any immediate or mid – or even long-term economic gain.

Nevermind that Pavlou in his activism tried to make this about the coronavirus pandemic, when he, according to the tabloid, citing Australian media, “hung a sign on a wall at the university’s Confucius Institute that said it was a COVID-19 ‘biohazard’.”

The real issue Pavlou may have on his hands here is Beijing’s possible perception that he has “gone there” – i.e., attempted to “drive a wedge between the mainland and Hong Kong.”