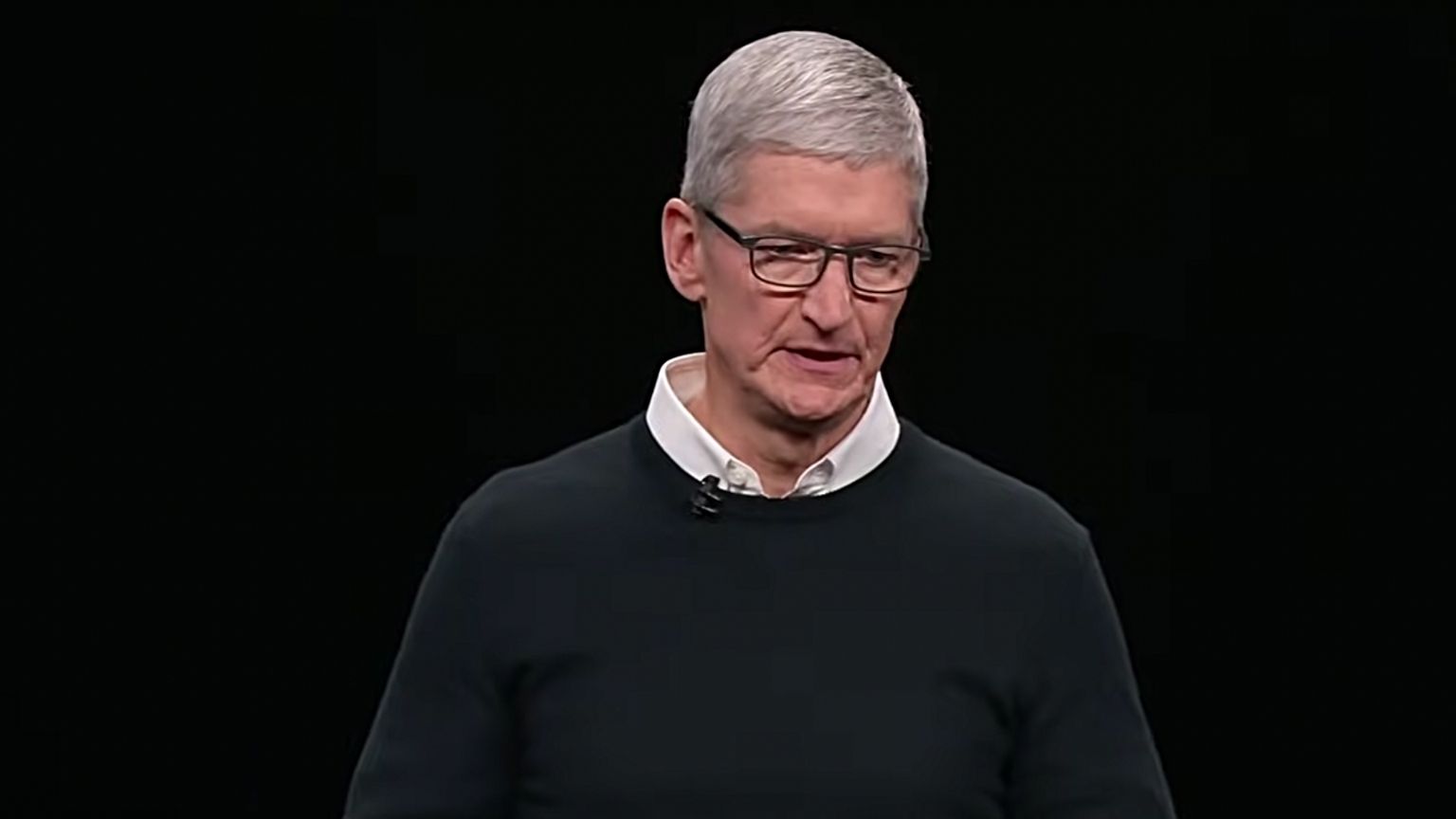 Apple has been ordered to no longer prevent developers from including links to third-party payment systems for in-app purchases, a judge ruled on Friday. The judge, however, didn’t go as far as ruling that Apple had a monopoly.

Apple has notoriously been preventing developers from linking to any alternative payment methods on the app, forcing app subscriptions to take place through Apple only, and giving the Big Tech giant an automatic 30% of the revenue each app brings in.

The ruling was handed down at the US District Court of the Northern District of California by Judge Yvonne Gonzalez Rogers in the case filed by Fortnite developer Epic against Apple.

The judge issued an injunction prohibiting Apple from banning the use of third-party payment services for in-app purchases.

The case was filed in August 2020 after Apple removed Fortnite from the App Store after Epic included an alternative to Apple’s in-app purchase system in an update to the game.

The game developer argued the tech giant was anti-competitive as it does not allow alternative payment systems, takes a 30% commission of all purchases made through its system, and does not allow side-loading of apps.

Epic did not view Friday’s ruling as a win because the judge ruled in favor of Apple in some of the other claims it made.

“Given the trial record, the Court cannot ultimately conclude that Apple is a monopolist under either federal or state antitrust laws,” court documents read. “Success is not illegal. The final trial record did not include evidence of other critical factors, such as barriers to entry and conduct, decreasing output or decreasing innovation in the relevant market.”

Epic’s CEO Tim Sweeney confirmed on Twitter that the company would appeal the decision, writing: “Today’s ruling isn’t a win for developers or for consumers. Epic is fighting for fair competition among in-app payment methods and app stores for a billion consumers.” 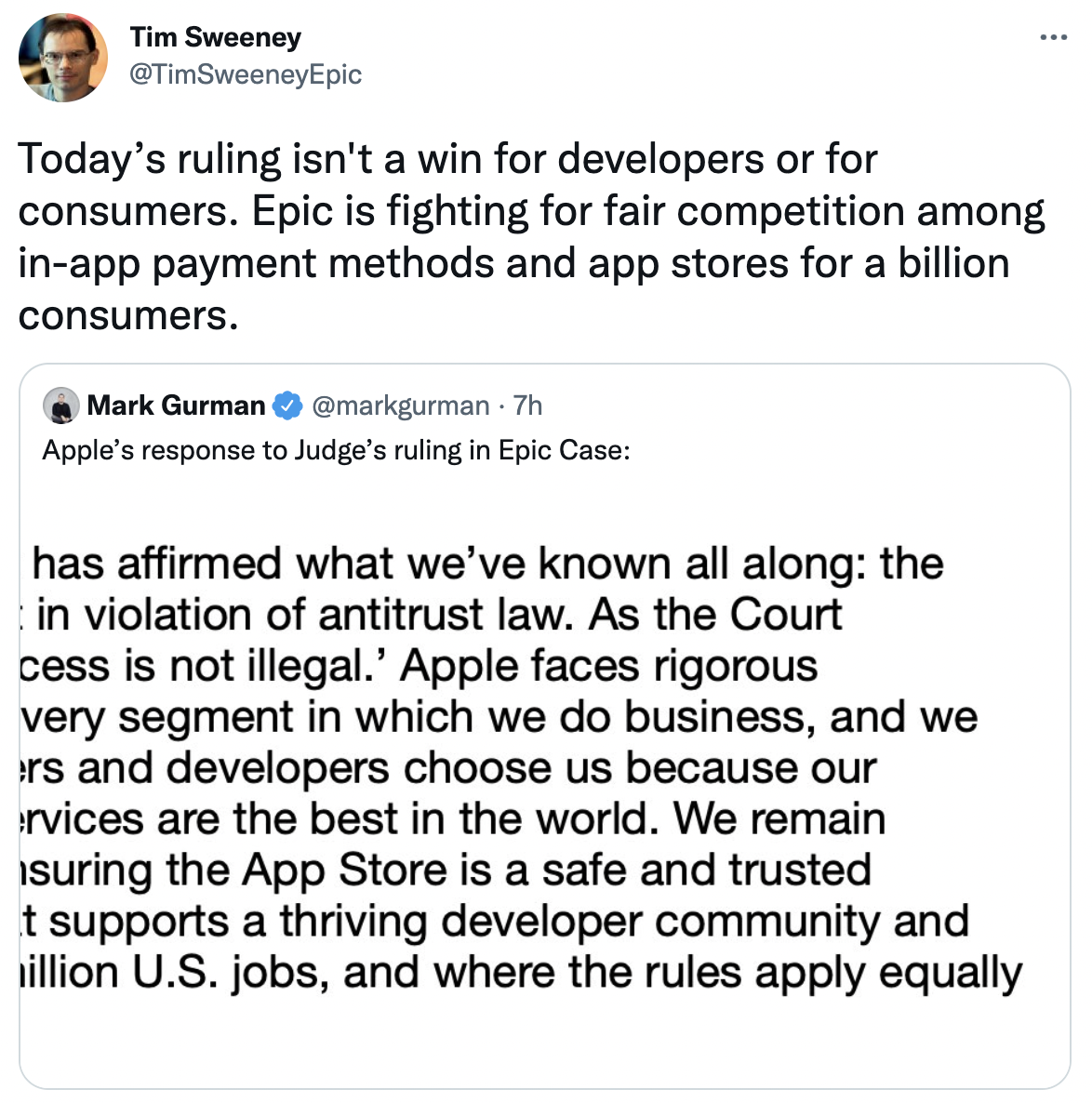 He added: “Fortnite will return to the iOS App Store when and where Epic can offer in-app payment in fair competition with Apple in-app payment, passing along the savings to consumers.”

Apple gloated about the small victory, saying: “Today the Court has affirmed what we’ve known all along: the App Store is not in violation of antitrust law. Apple faces rigorous competition in every segment in which we do business, and we believe customers and developers choose us because our products and services are the best in the world.”

The judge also ruled in favor of Apple in a counterclaim that Epic violated it the App Store’s terms of service by including an alternative in-app purchases system, and ordered the developer to pay the tech giant a 30% commission of the $12,167,719 in revenue it made from the iOS version of Fortnite between August and October 2020, and a 30% commission of any other revenue it made from the app from November to the time of the ruling.

Meanwhile, Apple continues to face pressure for its anti-competitive practices from governments in the US, Europe, and the UK, as well as other developers, including Spotify and Tinder developer Match Group.

In the weeks before the ruling on Friday, Apple made a few changes to the App Store policies. It said it would allow developers to email customers with information on alternative payment methods outside of the app. It also said that “reader” apps, the likes of Netflix and Spotify that simply distribute media, would be allowed to include links to a third-party website where users can pay for services.

But critics saw the changes as PR and a demonstration of the tech giant’s monopoly.

Judge Gonzalez Rogers injunction takes effect in 90 days. However, Epic is expected to appeal the ruling, which is likely to drag the case for several months.

While the alternative payment methods is a start, the ability for consumers to use alternative app stores and be able to download whatever apps they like without having to get Apple’s permission, is something developers are holding out for.