YouTube is up to its usual antics at a time when creators need stability the most.
Share

A married couple who go by the handle @BriaAndChrissy on Twitter announced on April 3 that their YouTube channel had been demonetized.

Our channel is no longer eligible for monetization: years of creating content for LGBTQ people, putting our hearts into the platform. Content so much more offensive is highlighted on your platform. So tired of the discrimination @YouTube @ytcreators #LgbtqVsGoggleYoutube PLS RT! pic.twitter.com/B2UMqn9nYI 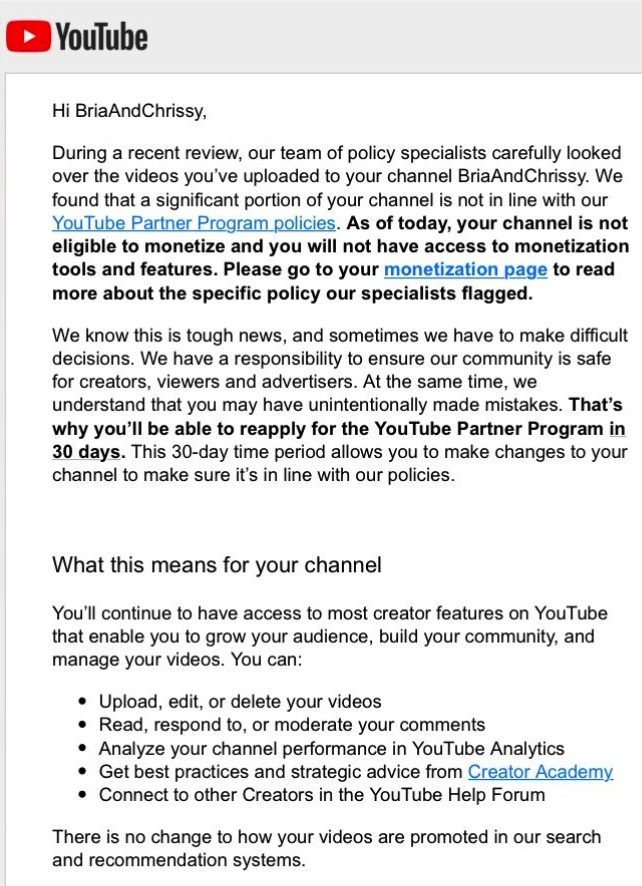 The channel, BriaAndChrissy, has over 850K subscribers, with its owners describing themselves as “a singing duo/lesbian couple with original music, making videos that inspire,” dedicated to comedy, entertainment, and promotion of equality.

They shared a screenshot of the message they received from YouTube, that said a recent review carried out by “a team of policy specialists” of the videos uploaded to the BriaAndChrissy channel resulted in the flagging of the channel because a significant portion did not adhere to the YouTube Partner rules.

For that reason, the channel was demonetized, while its owners lost access to monetization tools.

YouTube’s message said that the social media giant had to make this “difficult decision” to protect creators, viewers – and advertisers (probably not in that order, though). A more detailed explanation of what policies were violated is apparently provided in a link.

In addition, the channel’s owners are told they would be able to reapply to have their monetization reinstated in 30 days’ time – once they have corrected their mistakes, in case they were unintentional. No mention is made of the possibility of YouTube making a mistake – even if unintentional.

However, the YouTubers on April 4 announced that YouTube backtracked on the decision a lot faster than 30 days – it would seem, thanks to negative reactions online.

Announcing in a tweet that the channel’s monetization had been reinstated, @BriaAndChrissy said YouTube told them the decision to demonetize has been “a mistake.” So much for transparency.

UPDATE: Our monetization has been reinstated, thankful! I fear this is only the begging of many silencing tackticks. YouTube said it was a mistake, We think this is exactly the kind of mistreatment LGBTQ creators are receiving and the reason we filed our lawsuit💪🏳️‍🌈 #KeepFighting

But the pair added they feared this was “only the begging of many silencing tactics” and that it was because of this kind of mistreatment LGBTQ creators are receiving that they filed a lawsuit.

And even though they’re technically supposed to be remonetized, they’re having difficulty actually turning the monetization back on.

Bummed that even though @youtube has given us our capability to monetize we arn’t able to access monetization I guess they still have it shut off from us. @TeamYouTube you said it was a mistake can you please fix it from the back end?? Every day you strip us from our earnings. pic.twitter.com/AzFta6xqnb

Chiming in in the comments was another well-known figure, Arielle Scarcella – who knows all to well about getting canceled by radicals online.

In an earlier tweet, Scarcella revealed that YouTube recently also demonetized her entire channel, and called on her fans to support her on Patreon.

I didn’t want to post this publicly, but @ytcreators has demonitized my entire channel for the past three weeks. If you appreciate my content, please support my work through Patreon if you can afford it. A few dollars goes a long way. ❤️ https://t.co/FIeSL1dno5 pic.twitter.com/p9v2k95Pku 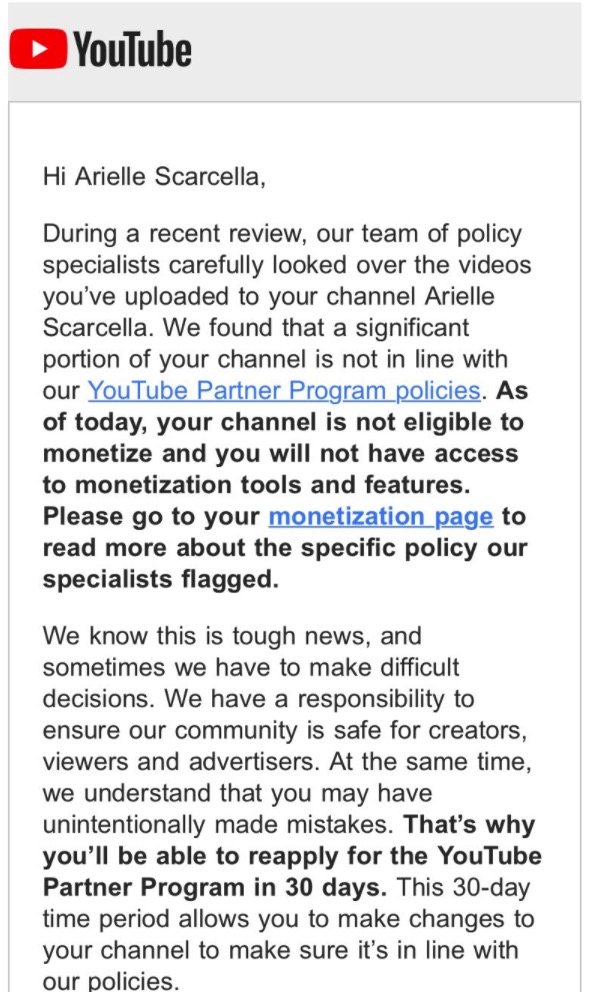 Many Twitter users who commented on the original tweet referred to cutting off people’s revenues at a time of massive economic turmoil due to the coronavirus pandemic was “evil” of YouTube.