The journalist says he will fight the ticket.
Share

Police in Montreal, in the Canadian Province of Quebec, gave a journalist a ticket for breaking curfew hours after he was reporting on their activities in the region, and despite the fact that journalism is considered an essential service not subject to curfews.

Yaakov Pollack, a reporter from Rebel News, an independent digital media outlet, was on the streets of Montreal past the 8 PM curfew investigating if the police were targeting the Jewish community for breaking the social gatherings restrictions.

Previously, Canadian authorities had apologized to the Montreal Hassidic community over confusion between religious services and social gathering rules.

According to Pollack, he encountered Montreal Police officers several times that night and, after providing his media credentials, he was let go.

“You guys are giving tickets, and I’m reporting on you,” Pollack said to an officer on one of the encounters. “I’m press, I’m media,” he said when the officers started questioning him.

On the second encounter, the police asked him to provide his credentials.

“Everything’s good, everything checks outs,” a police officer told Pollack after inspecting his paperwork. “Just make sure you’re on the sidewalk,” the officer added.

However, Pollack eventually encountered officers who did not respect the fact that journalism is an essential service.

“This is essential, tonight, to be outside?” an officer asked him sarcastically. He answered, “Yes.”

“Essential?” the officer asked again dismissively as his partner questioned Pollack why media was essential.

The officers then told him to wait, then came back to inform him that he was getting a fine. “Good luck with your YouTube channel,” one of the officers told him after giving him the ticket.

“I will fight this and I will win this,” Pollak told them. “This is shameful.”

Here is the moment an @SPVM officer decides that media isn't essential and I got a Curfew ticket more to come on https://t.co/e6FLDsUFZJ.

If you get a fine like I did go to https://t.co/9MjpXyHUaA for a free lawyer! pic.twitter.com/OhMrUWkHLj

Through email Pollack had confirmed with the Montreal Police Department that media was indeed essential. 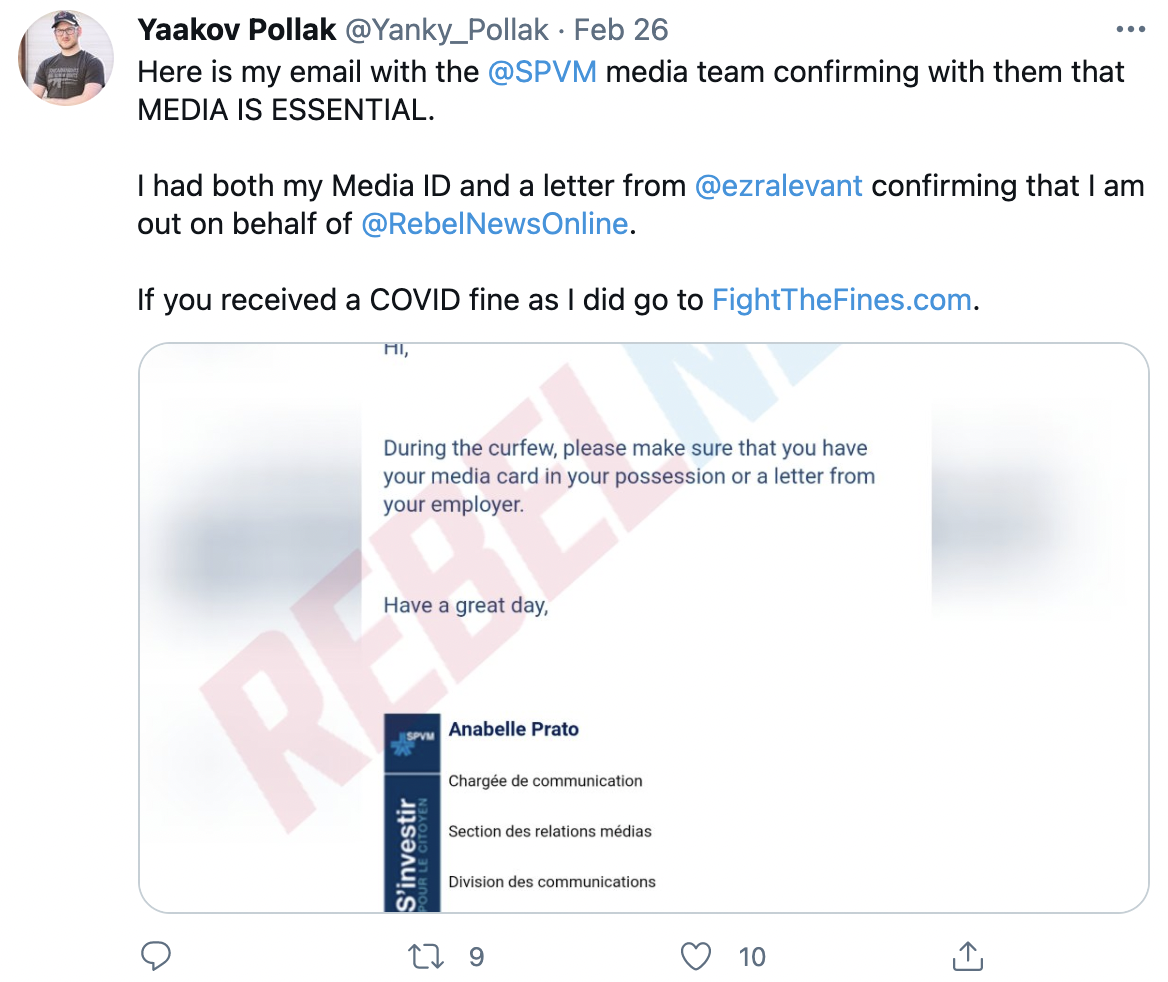 “During the curfew, please make sure that you have your media card in your possession or a letter from your employer,” the Montreal Police wrote, in their reply to Pollack’s inquiry.

When he was ticketed, Pollack had both documents; his press credentials and letter from his editor.