Oswalt was told by followers to delete the photo.
Share 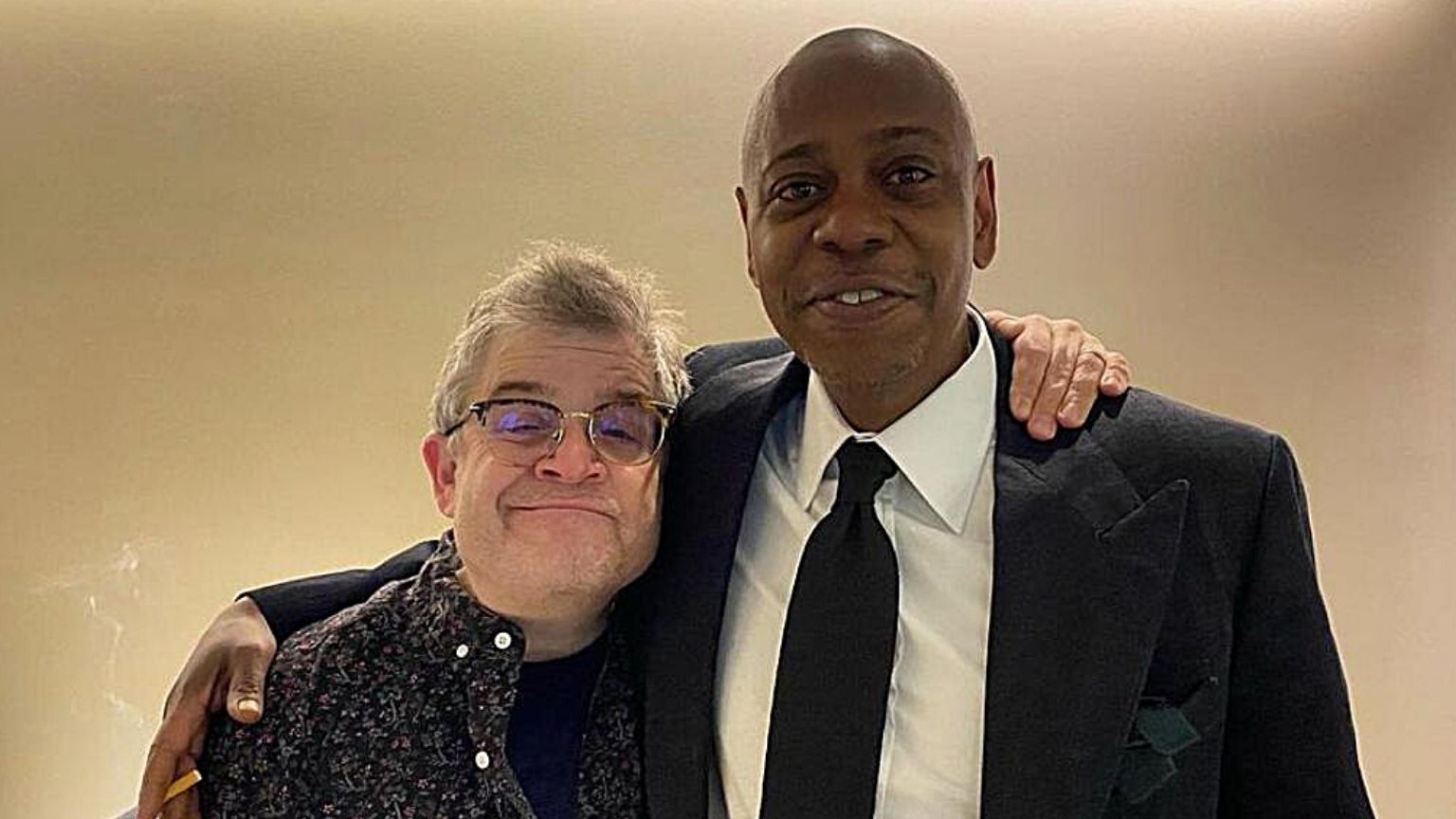 Patton Oswalt has responded to backlash he received for simply posting a photo with comedian Dave Chappelle on New Year’s Eve. Chappelle was the subject of controversy from a small but vocal minority of people that wanted Netflix to censor him over comments he made in his last Netflix special “The Closer.”

Oswalt posted several pictures he took during a meet-up with Chappelle in Seattle, WA. In the caption, Oswalt described Chappelle as a “real friend” and “genius.” 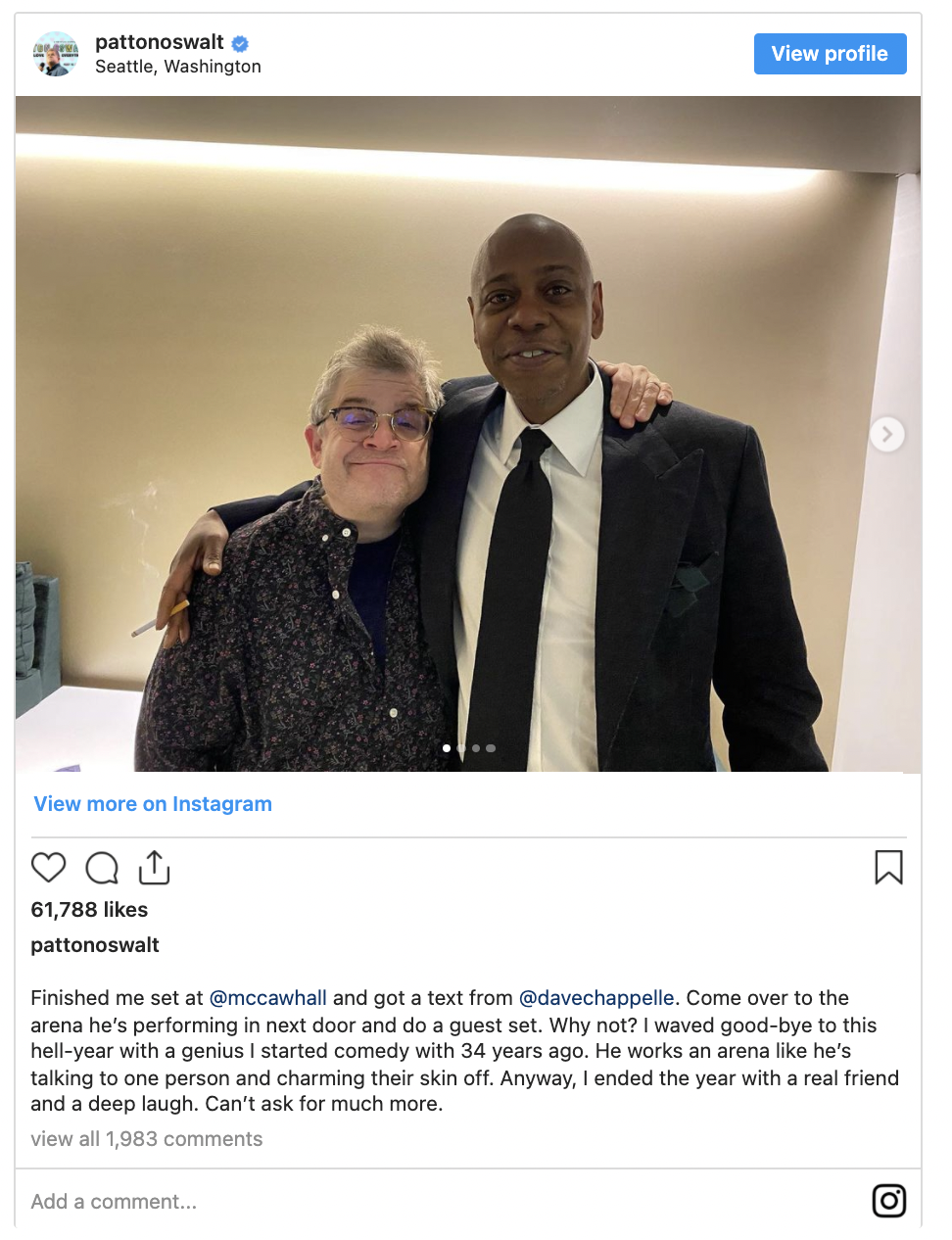 The Instagram posts generated fury from some of his followers who told him to delete the photo.

Chappelle was on the receiving end of censorship calls due to comments he made in his Netflix special “The Closer.” He also defended Harry Potter writer J.K Rowling:

“They’ve canceled people that are more powerful than me,” Chappelle had said. “Cancelled JK Rowling. My God, JK Rowling wrote all the Harry Potter books by herself. She sold so many books the Bible worries about her. And they canceled it because she said in an interview, and this isn’t exactly what she said but it’s effectively what she said, gender is a fact. And then the trans community gap man sh*t they started calling her and TERF.

“I didn’t even know what the f*ck that was,” he said, “but I know that trans people will make up words when arguments. So I looked it up, TERF is an acronym stands for trans exclusionary radical feminists is a real thing. This is a group of women that hate transgender—they don’t hate transgender women—but they look at trans women, the way we blacks might look at blackface and offends them like, bitch is doing an impression of me!”

In the original Instagram posts, Oswalt explained that both he and Chappelle were in Seattle for end-year stand-up sets. Their performances happened to be in the same neighborhood. Chappelle sent him a text asking him to drop by and to a guest set. Oswalt thought “why not?”

Oswalt responded to the criticism in a lengthy Instagram post. He clarified that they “100 disagree on transgender rights.” But it is not possible to cut off someone you have been friends with for more than three decades.

Oswalt wrote: “I waved good-bye to this hell-year with a genius I started comedy with 34 years ago.

“He works an arena like he’s talking to one person and charming their skin off. Anyway, I ended the year with a real friend and a deep laugh. Can’t ask for much more.”

The 52-year-old comedian apologized for any hurt his posts may have caused. But he defended the friendship.

“I saw a friend I hadn’t seen in a long time this New Year’s Eve. We’ve known each other since we’re teens. He’s a fellow comedian, the funniest I’ve ever met. I wanted to post a pic & an IG story about it — so I did. The friend is Dave Chappelle,’ Oswalt began.

“Thirty four YEARS we’ve been friends. He’s refocused and refined ideas a lot of us took as settled about race & history & Life On Planet Earth and spun them around with a phrase or punchline. We’ve done bad & good gigs, open mikes & TV tapings. But we also 100% disagree about transgender rights & representation.

“I support trans peoples’ rights — ANYONE’S rights — to live safely in the world as their fullest selves. For all the things he’s helped ME evolve on, I’ll always disagree with where he stands NOW on transgender issues.

“But I also don’t believe a seeker like him is done evolving, learning. You know someone that long, see the struggles and changes, it’s impossible to cut them off. Impossible not to be hopeful and open and cheer them on.”

He confessed to having “naively” deleted some comments because he wanted a “nice comment thread.”

“I (naively) deleted a lot of posts in the comment thread — critical ones from LGBTQ writers AND shit-posts by TERF/anti-trans orcs looking for clicks & giggles.

“I wanted a “nice comment thread” about the pic with my friend. Ugh. So easy to think someone ELSE needs growth and miss the need in yourself. Gonna keep trying.”