PinePage is a new Patreon alternative committed to free speech 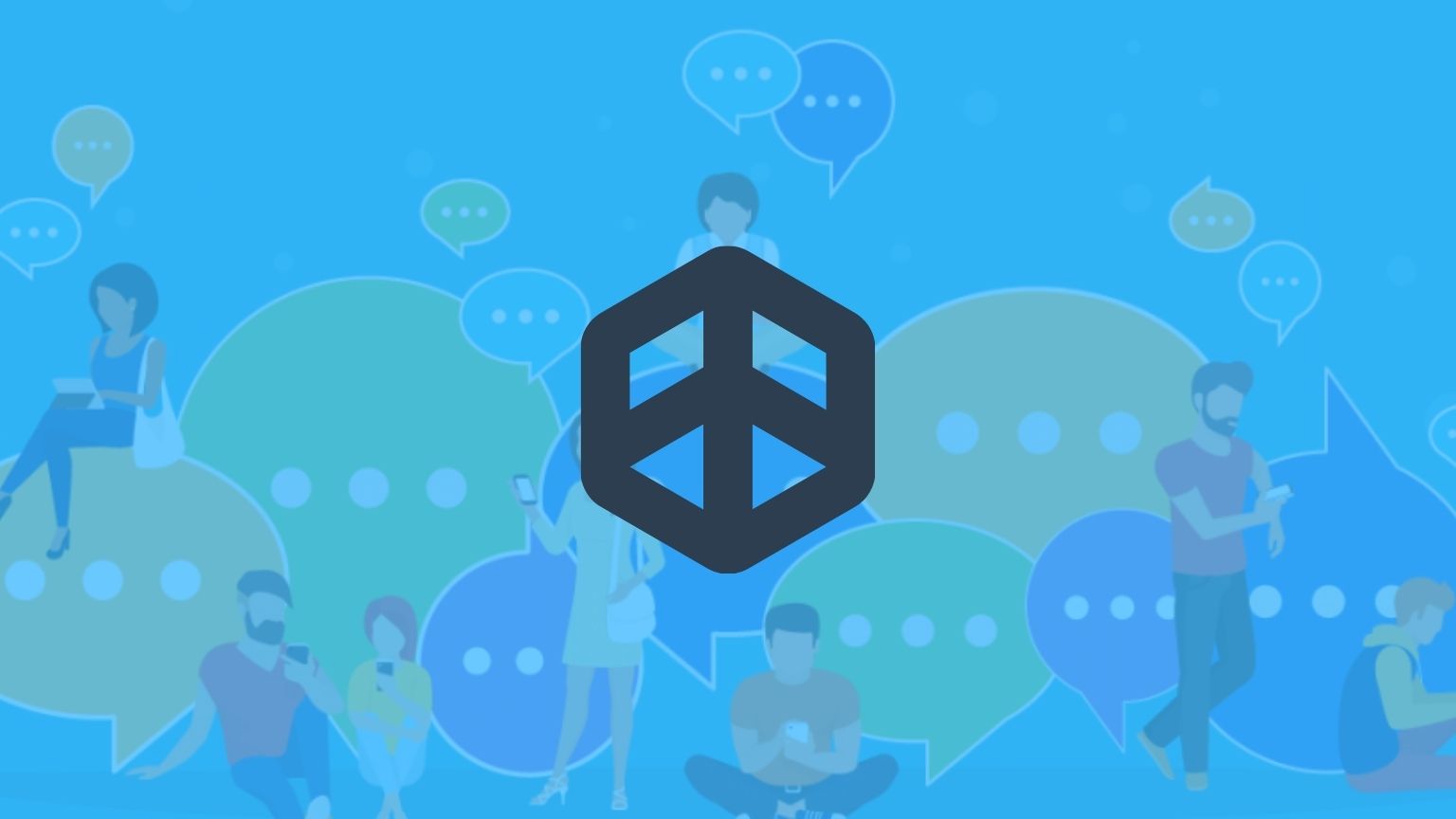 Patreon may not have the financial and user-base clout to be an actual member of Big Tech, but this probably currently best-known and widely used by creators platform is fully aligned, policy-wise, with the tech and business behemoths that are pulling the strings on the internet.

This means that over the years Patreon has engaged in numerous acts of deplatforming, leaving the victims of this policy fully aware that this is yet another platform in desperate need of viable alternatives.

The online economy, however, being set up as it is right now – leaning more towards sustaining existing monopolies than giving a chance to innovation and competition – means that any attempt to gain a footing in a market with established and colluding players is extremely difficult for startups.

That doesn’t mean they are not trying, and some are even, against all odds, starting to succeed. Those behind a new Patreon alternative, PinePage, undoubtedly hope to be among them, and their strategy is two-pronged: focus on what is increasingly missing on Patreon, namely, more freedom of expression and opinion; and move the payment solutions away from banks as centralized institutions that in the end control the entire business model, and towards decentralized ones like cryptocurrencies.

Asked about the origin of PinePage, the company said that it was initially envisaged as simply a “general” crowdfunding platform rather than one focusing on a free speech Patreon alternative.

“Becoming a witness to many recent developments in the industry and around the world made me consider shifting gear, but the actual turning point was Ron Paul’s platform ban, even though he practices the libertarian, non-violent principle,” the company’s founder, Martin, told Reclaim The Net, adding that PinePage’s focus shifted at that point. 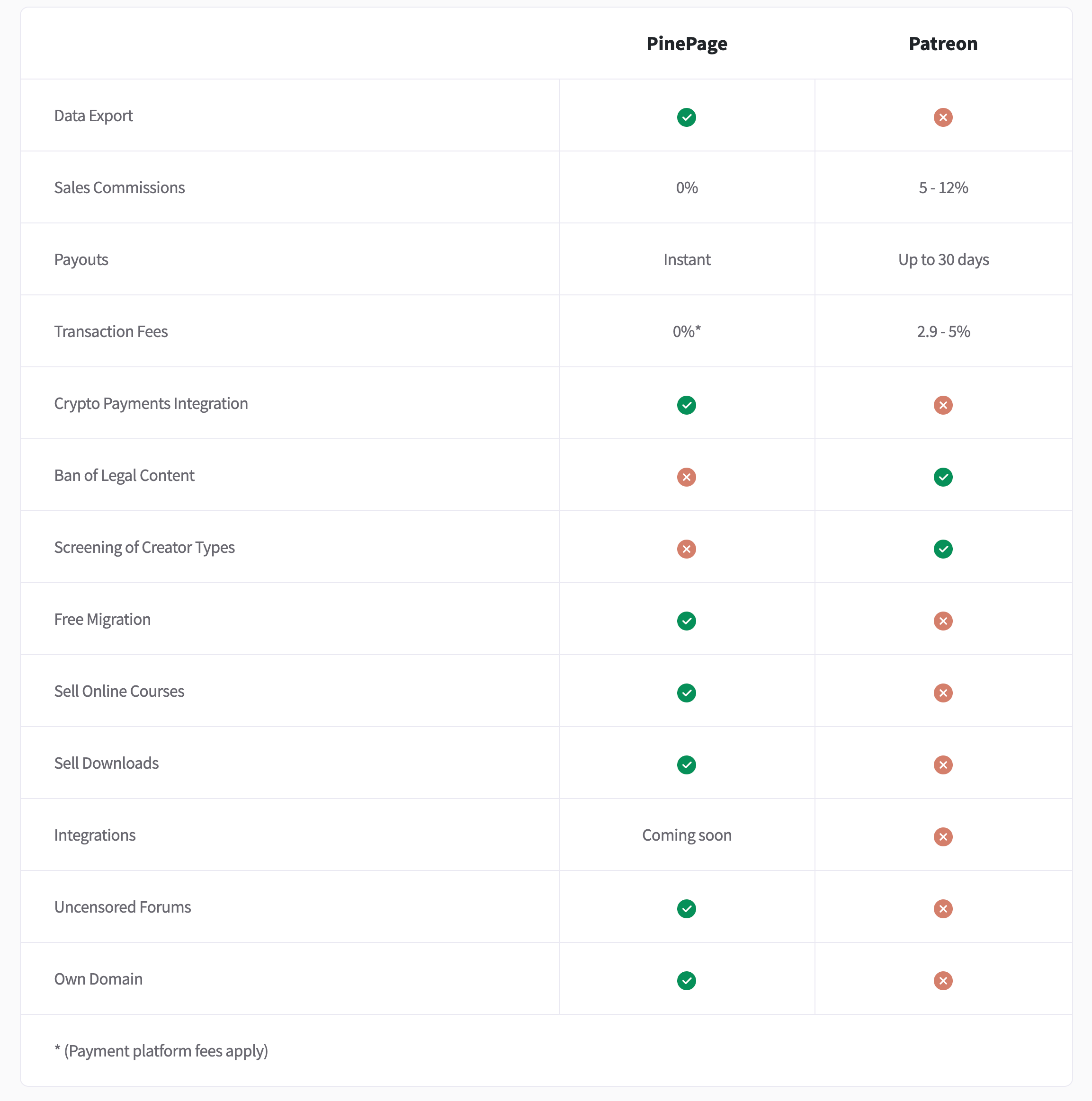 Speaking about the weaponization of the financial system in the US, the founder noted that it is directed toward foreign and domestic “enemies,” citing this as the reason to start bringing cryptocurrencies into the mix, and working towards eventually having a fully decentralized payment service that will include Bitcoin lightning network. 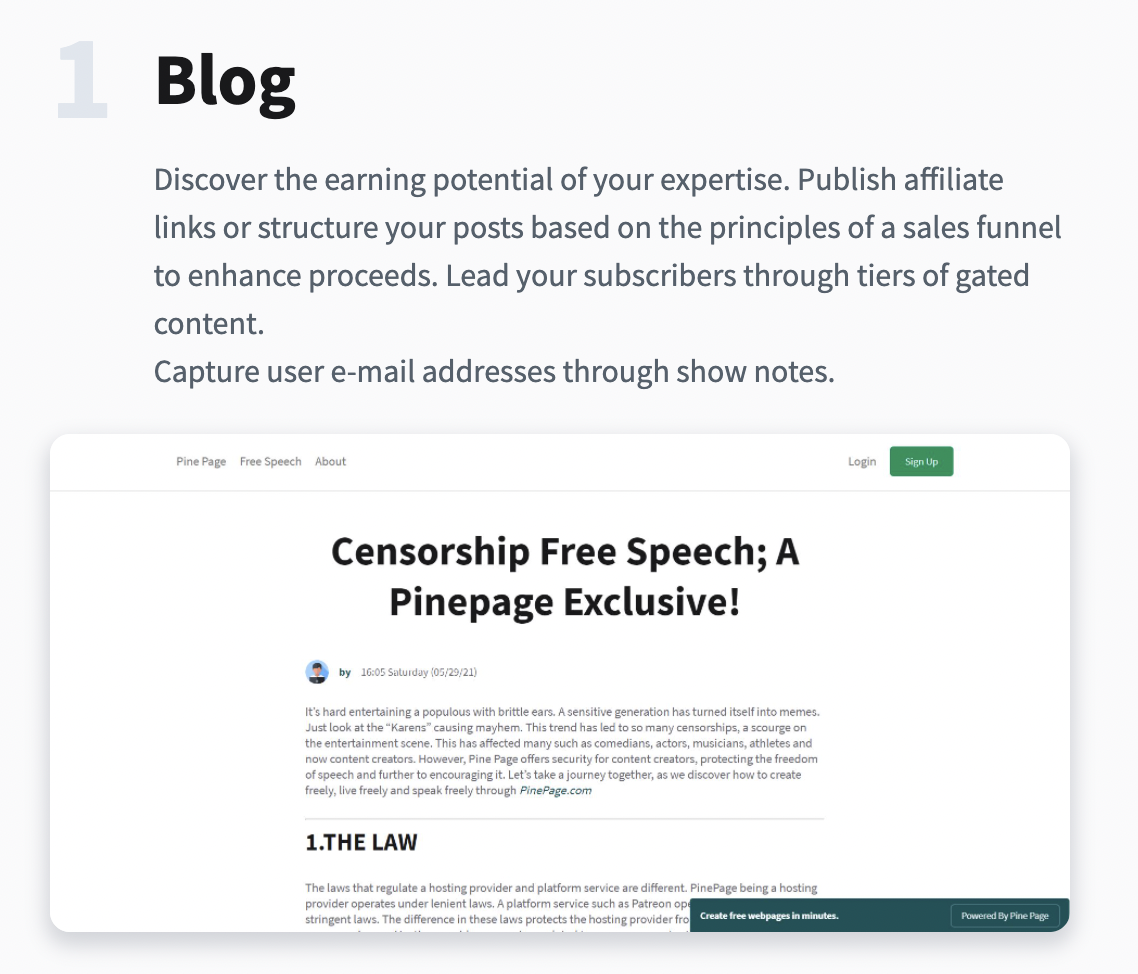 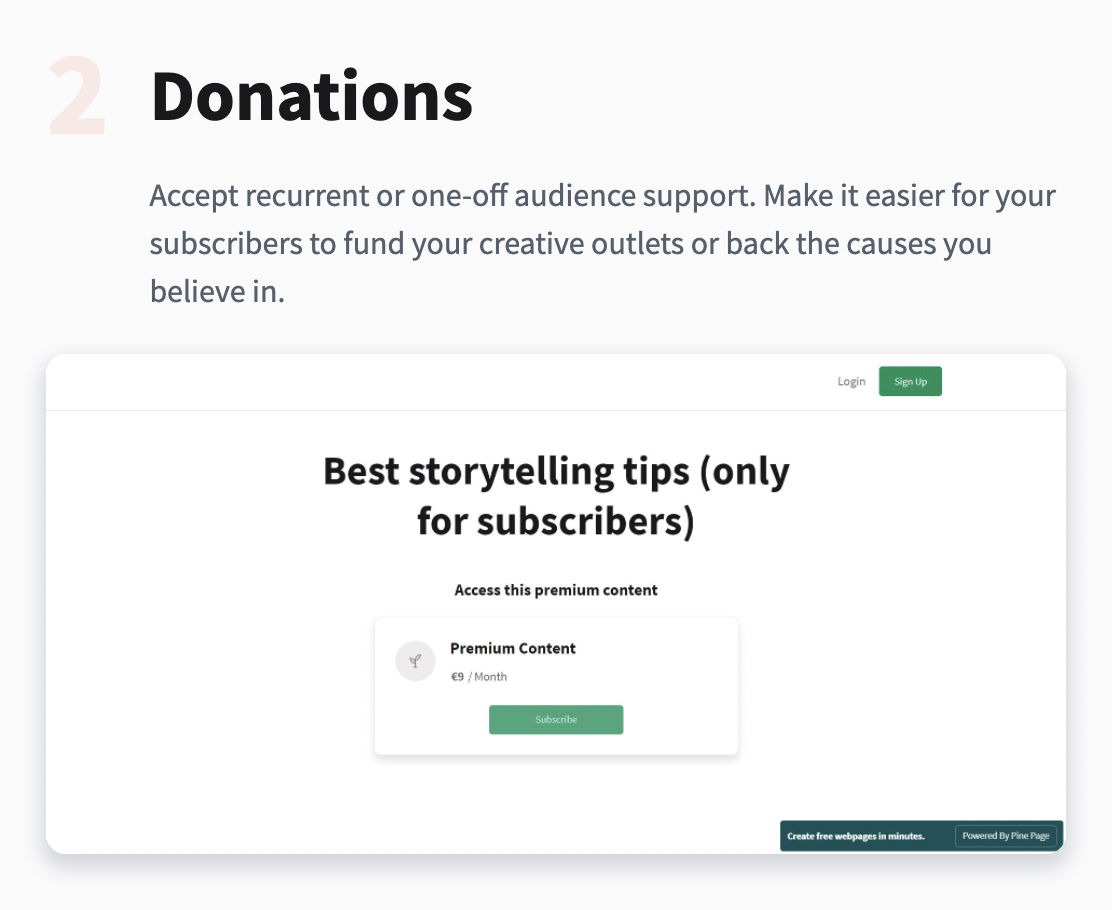 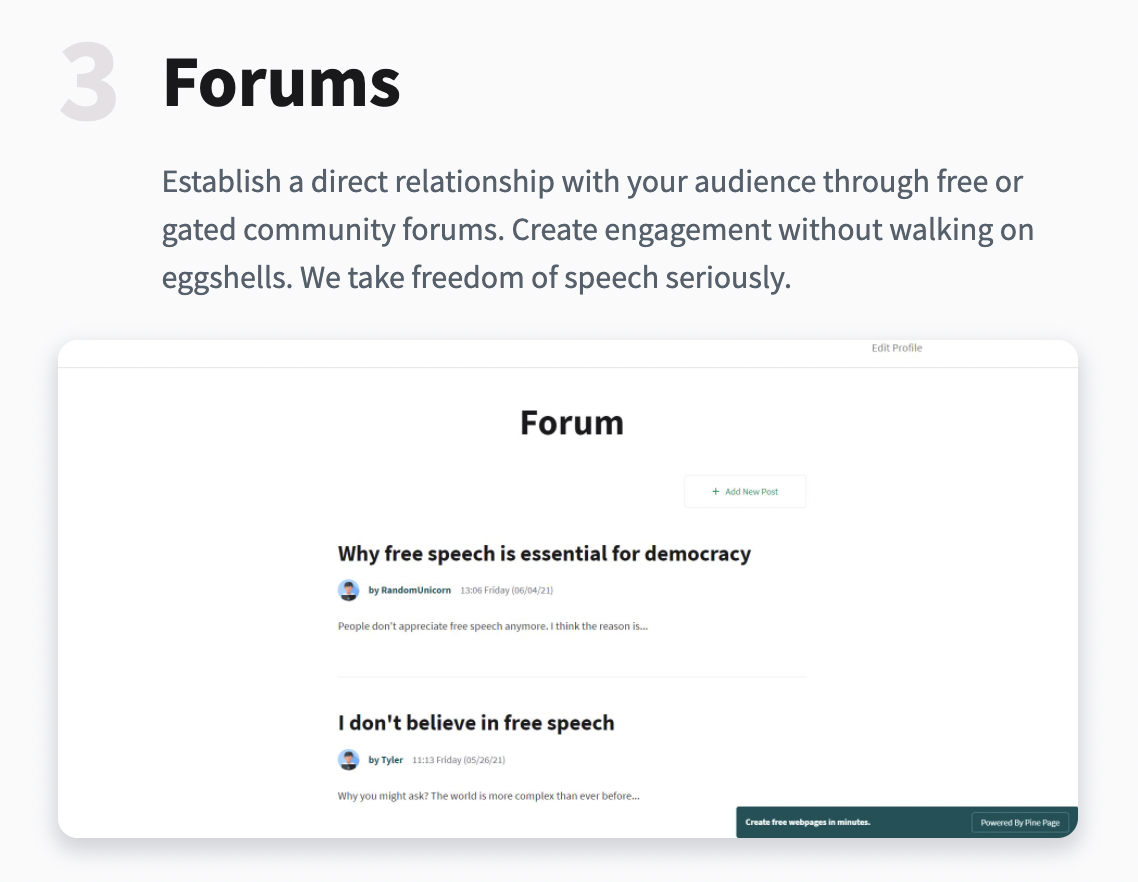 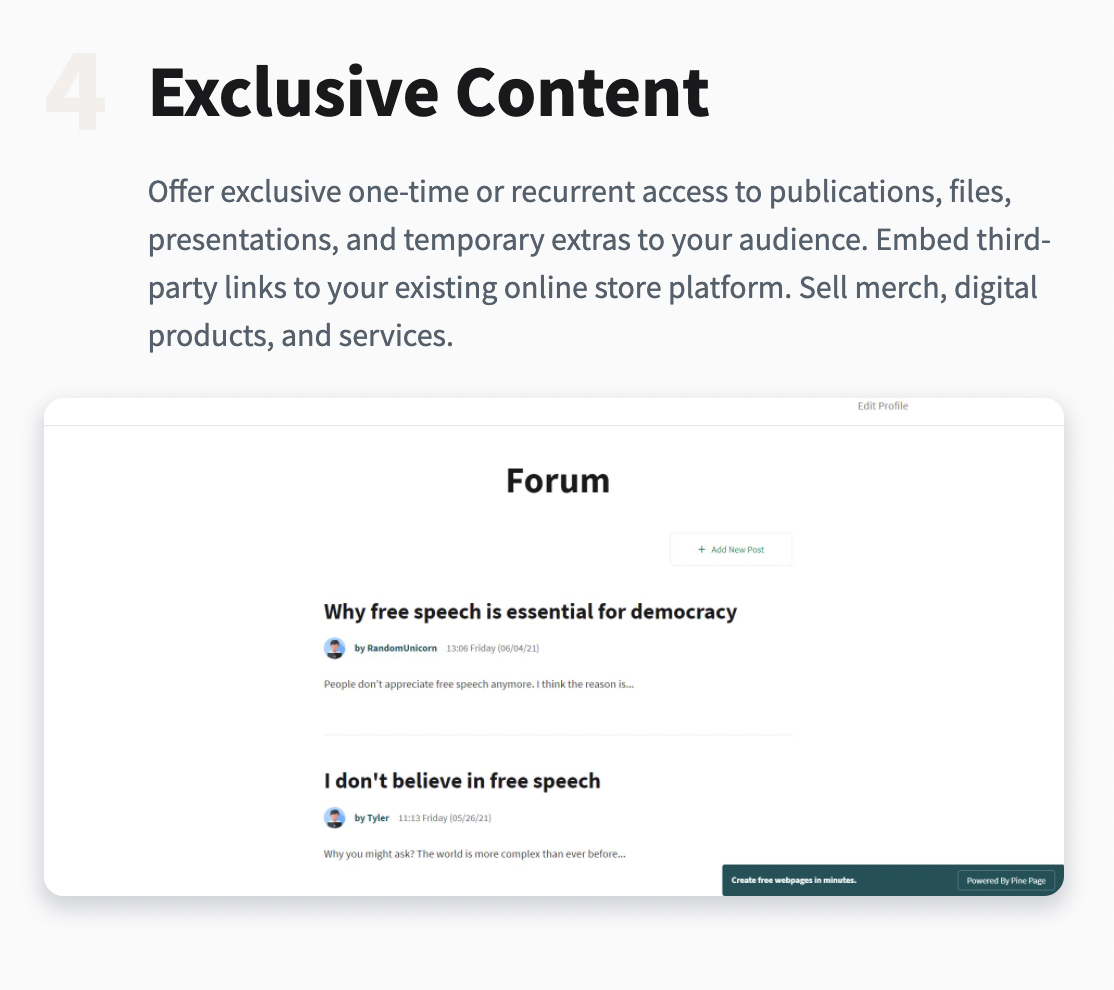 “It is clear that cryptocurrencies are the only way to not only reclaim the net but to reclaim some freedom we’ve lost along the way. I got particularly concerned when I heard of Chase bank’s recent effort to not only go after a general and a war hero but also close his wife’s bank account because he served under Trump. All accusations against the General were revoked, but the fact that he and his family suffered significant damages remains,” the founder added.

On its website, PinePage quotes Voltaire’s stance for the ages, “I disapprove of what you say, but I will defend to the death your right to say it,” as a diminishing value in today’s tech world and on various platforms, but also as a motive to try to come up with alternatives.

PinePage hopes to provide creators a place where they can grow without fear of expressing themselves, and stresses the importance of tolerance and coexistence of different ideas.