Pete Buttigieg mostly goes to the Primary tab - the rest? Not so much.
Share

Is Google, and its Gmail, expected to be a news service these days – that appears beholden to the rules of fair, balanced, and accurate news reporting?

And if yes – legally, by whom? And since when?

Today, we mostly see Google looking for ways to adjust to the liberal pressure in the US – but that’s not the same as supporting a particular Democratic hopeful of the hour.

These are so many – and they all want a piece of the cake of Google’s massive influence on the voter market.

The Democratic primaries carnage is such a fast-moving target that the likes of Pete Buttigieg (?!) might be seen as an actual contender on any given day.

So can Google keep up with all this?

Maybe the current liberal media suffering in the US will fall into place after the Fall election, once the campaign politics have gone away?

Perhaps giant social networks will be reaffirmed as merely platforms for user-generated content – or, legally required to act as publishers?

Who’s to say? In the meantime – if you need help finding out whether a label that appears in your Gmail inbox might be (in)appropriate – Markup has your back.

It’s a nonprofit newsroom that co-publishes with The Guardian. And it experimentally set up a new Gmail account to test (its) political biases. 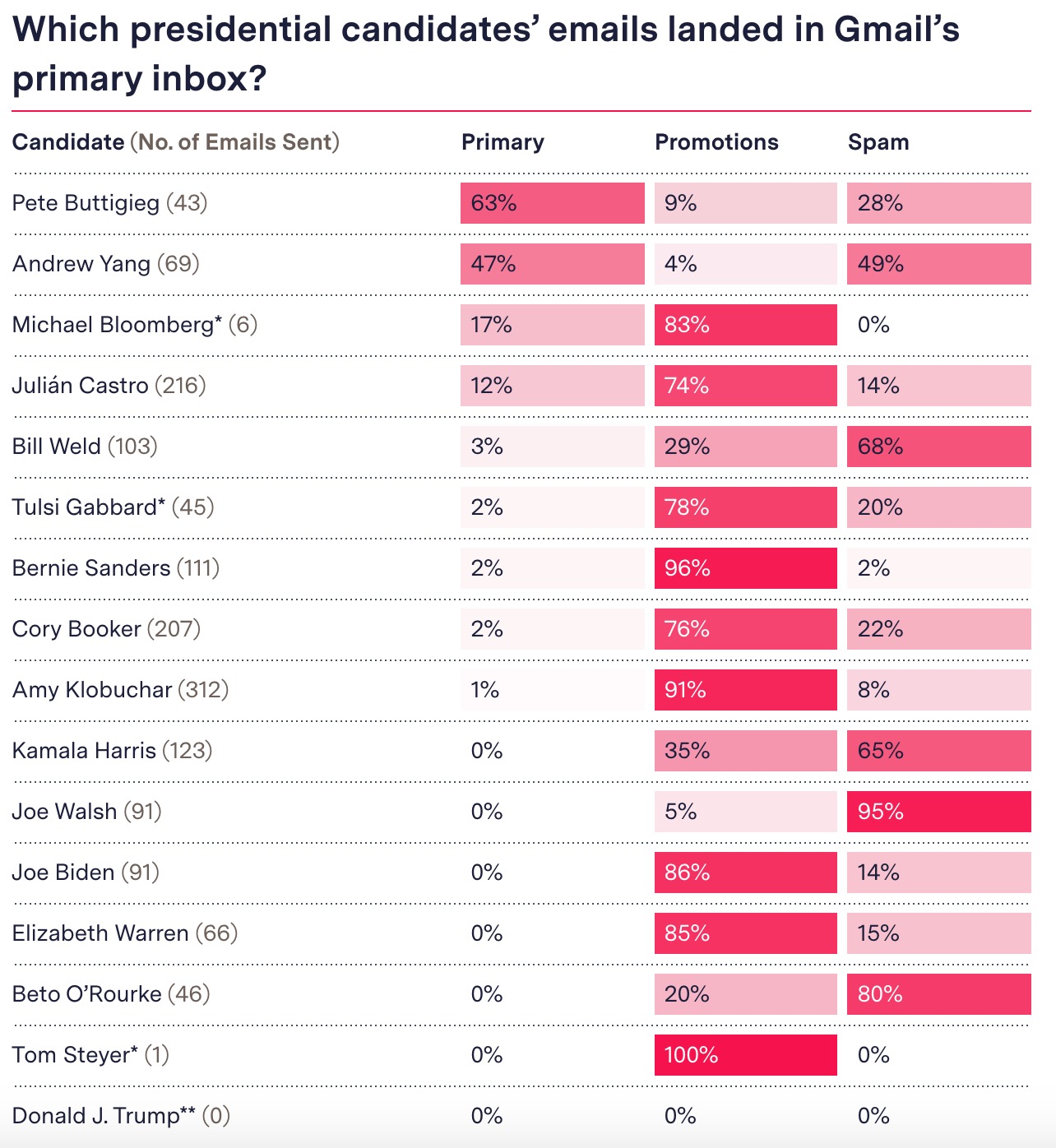 “Half of all emails landed in a tab called ‘promotions’, which Gmail says is for ‘deals, offers” – while the email service sent “another 40 percent to spam.”

(So – where’s the lie? You signed up ostensibly having previously used Google – then Google used all your data and signals to build up a new account – but now you suddenly don’t trust Google to show you what you told it you want to see?)

Apparently not. While the report seems to have made its peace with “algorithms” controlling what appears on Twitter or Facebook “feeds,” suddenly Gmail – for over a decade notorious by anyone paying the least bit of attention precisely for mining data from every email passing through Google’s servers – is supposed to suddenly become controversial.

“The fact that Gmail has so much control over our democracy and what happens and who raises money is frightening,” said Kenneth Pennington, a consultant who worked on Beto O’Rourke’s digital campaign.

Settle down, Kenneth. It’s been frightening for a solid 15+ years now.

“It’s scary that if Gmail changes their algorithms,” he added, “they’d have the power to impact our election.”

It must also be enticing as hell to get Google to do just that.