Four US Senators, including Ted Cruz, penned a letter on February 6 to Jack Dorsey asking him to ban Iranian leadership from using Twitter as part of the US sanctions against Iran.

The letter, also signed by Tom Cotton, Marsha Blackburn and Marc Rubio, references the Obama administration’s decision to create an exception in their sanctions for “instant messaging, chat and email, social networking.”

This decision is, the letter complains, “licensing the Iranian regime to propagandize over American social media platforms such as Twitter. Ironically and infuriatingly, the regime does not allow its own people access to such platforms.” 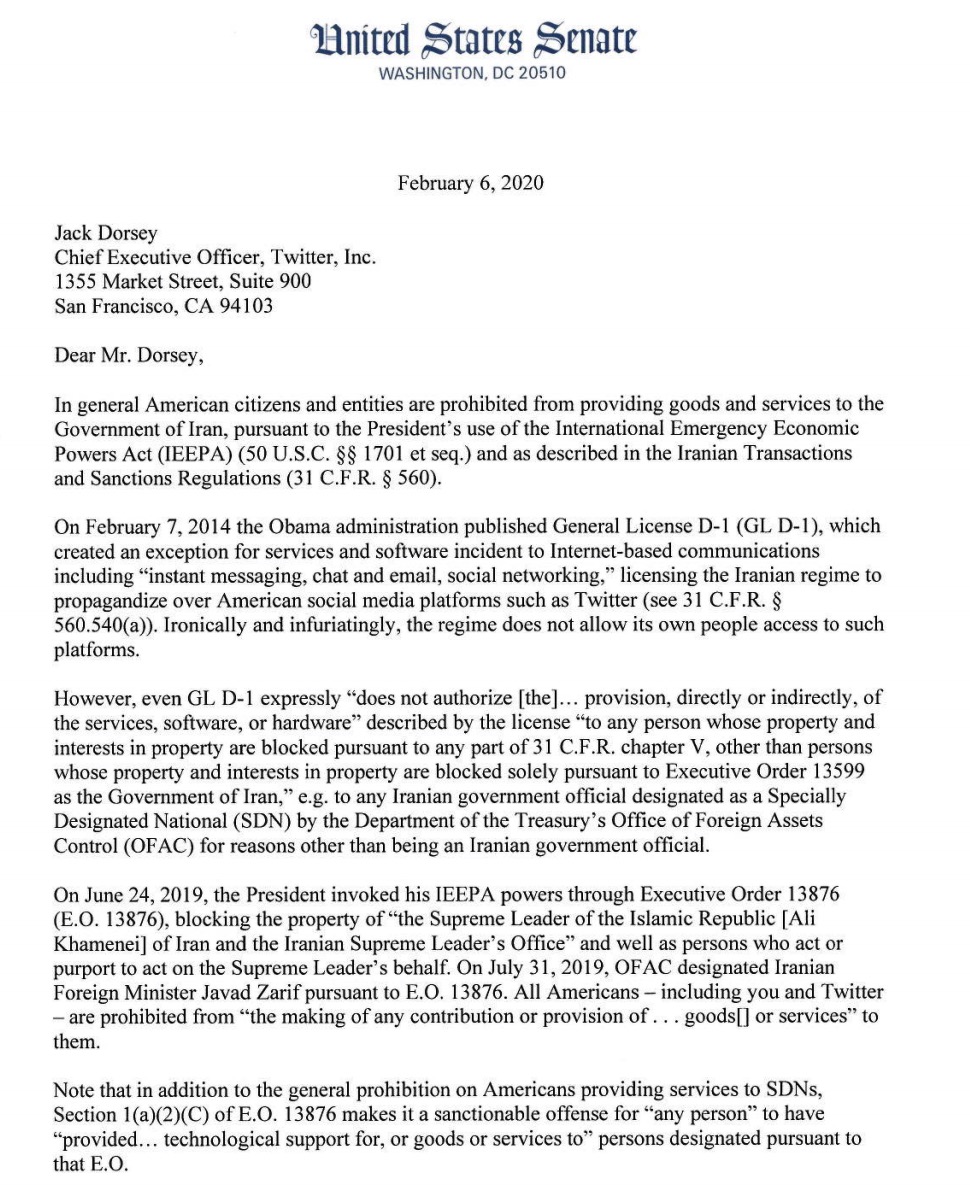 The reasoning behind the Obama administration’s decision was precisely to contrast the Iranian regime’s restrictive policies, by allowing Iranian citizens access to communication tools of free expression and uncensored speech.

The letter seemingly attempts to use a complicated and confusing legal loophole to compel Twitter to comply, stopping just short of deeming it illegal for Twitter to allow Iranian leadership to use Twitter.

The claim is that even the Obama administration’s decision contained a clause stating that it could be overridden by an executive order, such as the one invoked by President Trump when he imposed sanctions on Iran.

Before the strongly worded, “We therefore call on you to comply with those sanctions by ceasing the provision of services to Khamenei, Zarif, and any other designated Iranian entity,” the letter ends by strongly implying that the Bill of Rights only applies to Americans:

“While the First Amendment protects the free speech rights of Americans – and Twitter should not be censoring the political speech of Americans – the Ayatollah enjoys zero protection from the United States Bill of Rights. And, as the leader of the world’s leading state sponsor of terrorism – directly responsible for the murder of hundreds of U.S. citizens – the Ayatollah and any American companies providing him assistance are entirely subject to U.S. sanction laws.”

Private companies aren’t forced to allow free speech; each operating under their own terms. If Twitter abides by these demands, particularly if Trump gets behind them, it could set a new precedent of censorship.