In an absurd case, a Japanese manga publisher called Shogakukan has requested Google take down a page on Dictionary.com defining the word “magi.” The publisher is claiming copyright infringement as Magi refers to a popular manga comic. However, magi is also an actual English word and the page contains zero infringing content.

Shogakukan Inc. is a Japanese publisher of popular manga comics, dictionaries, literature, and other media. It is part of Hitotsubashi, one of the biggest publishing companies in Japan.

Some of the takedown notices by Shogakukan are legit. However, others, like this one to take down the dictionary.com page defining magi, are a clear overreach. 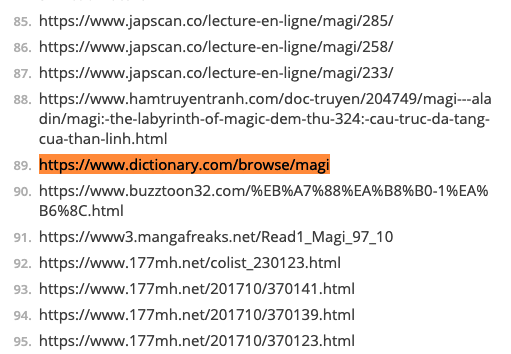 The word magi refers to, among other things, the three wise men who visited Jesus as a baby. The Dictionary.com page does not contain any information related to the comic Magi.

According to TorrentFreak, copyright holders often make such mistakes. Additionally, Shogakukan is not the first content creator to issue a takedown notice targeting dictionary.com.

JTBC, a broadcasting network in South Korea, issued a similar notice for the definition of “noblewoman.” The media company owns a television series called The Noblesse, which is also referred to as Noblewoman.

Yet another notice was issued on “submergence,” as it also refers to a movie produced in 2017.

Such mistakes are worrying in their implications for censorship. Fortunately, Google does not respond to DMCA notices blindly. Moreover, the search engine has a list of “non-infringing domains,” which, for obvious reasons, should include dictionary websites.