Steven Seagal fined $314,000 for failing to disclose he was paid to endorse Bitcoiin2Gen

Steven Seagal has received a large fine for promoting a bitcoin offering without indicating he was being paid to promote it.

The actor and martial artist must pay a fine of $314,000 for promoting on their social networks an initial sale of Bitcoiin2Gen without disclosing that it was a paid endorsement.

Illegal use of influences

The promotion of securities by public figures is an act that is regulated by the SEC to protect potential buyers from decisions driven solely by the popularity of those who promote them.

For this reason, actors are obliged to indicate if they are receiving compensation to advertise the sale of securities.

Steven Seagal, however, suggests he wasn’t aware of this law when he agreed to make a promotion for Bitcoiin2Gen.

In 2018, the actor made a series of promotions on his social network accounts in which he invited his followers not to miss the first batch of Bitcoins that B2G would be offering.

Additionally, Seagal was appointed as the official B2G ambassador in a press release. 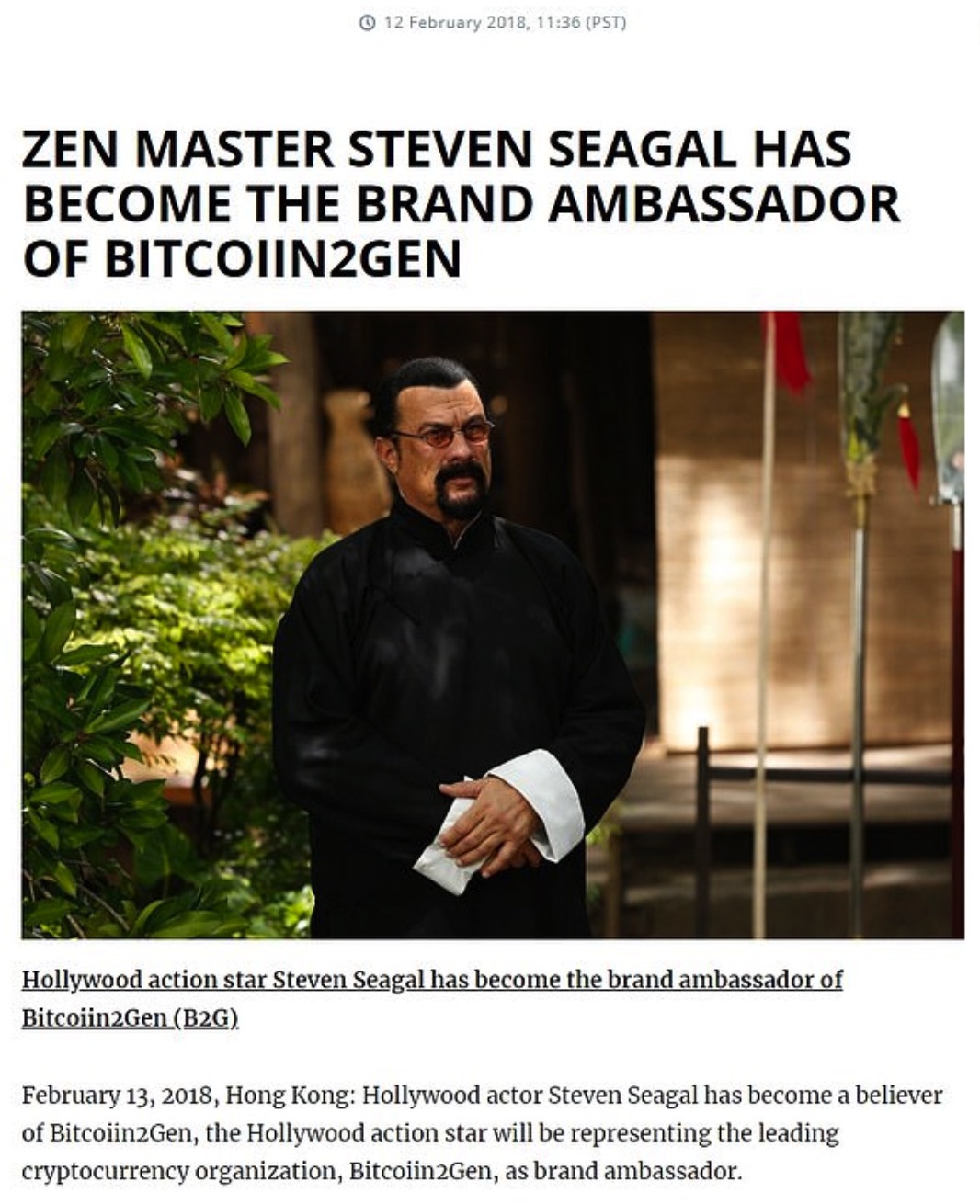 All these campaigns were conducted six months after the U.S. Securities and Exchange Commission issued the warning that forced celebrities to indicate if they were receiving some kind of remuneration for advertising.

Finally, it was announced that B2G promised Seagal $1 million ($250,000 in cash and $750,000 in B2G tokens to the official exchange), but he did not mention it when he made the promotion, so he has been fined and punished by the SEC, as indicated on February 27, 2020, two years after the promotion.

After the fine was imposed, the actor agreed to pay it without a problem, agreeing that half the money would come from what he earned “fraudulently” in the promotion, and the other half would be a penalty for not indicating to his followers how much he would win for advertising B2G.

Additionally, the actor has been prohibited from carrying out securities promotions for three years.

Although Seagal says he did nothing wrong, Kristina Littman, Chief of the SEC Enforcement Division’s Cyber ​​Unit, indicated that not mentioning if you are receiving monetary remuneration for advertising the sale of securities can lead investors to become victims of fraud.

“These investors were entitled to know about payments Seagal received or was promised to endorse this investment so they could decide whether he may be biased,” Littman.

“Celebrities are not allowed to use their social media influence to tout securities without appropriately disclosing their compensation.”

Cryptocurrencies fall into the category of being securities, so their sale and advertising must have clear conditions.