A youth group announced that it would give students in the Burbank Unified School District free copies of five books that were recently removed from the curriculum. The books, including Harper Lee’s To Kill a Mockingbird, were challenged and later removed over racial themes – even though the book advocates against racism. 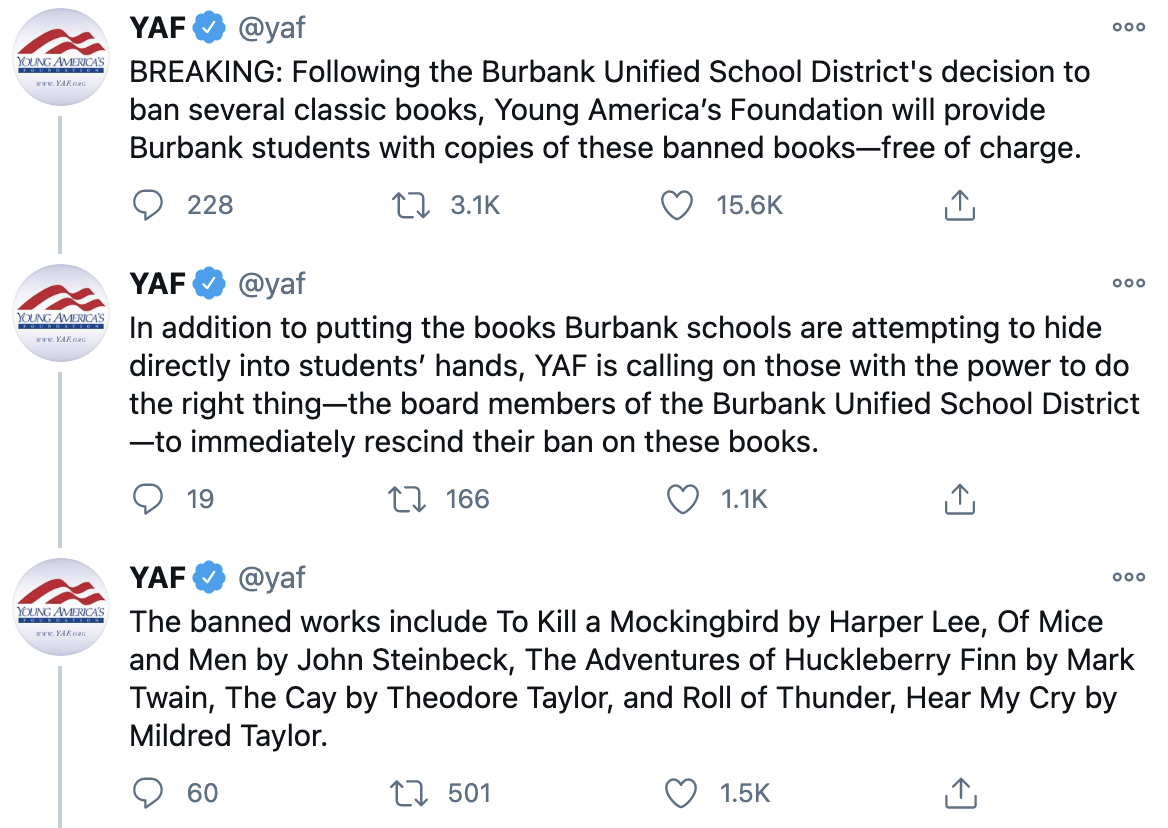 On September 9, the Burbank Unified School District told teachers and issued a virtual notice that they would no longer teach using five of the books in the curriculum until further notice.

Just four parents filed complaints with the school district claiming that the five books, which deal with the issues of racism in America, were problematic to the black students in the district. The district formed a 15-person panel to review the complaints and come up with recommendations.

The panel could not reach an agreement. Still, the school district went ahead and removed the novels from the reading list. So, in the Burbank Unified School District, teachers are no longer allowed to teach Harper Lee’s To Kill a Mockingbird, Mildred D Taylor’s award-winning classic Roll of Thunder, Hear My Cry, Theodore Taylor’s The Cay, John Steinbeck’s Of Mice and Men, and Mark Twain’s The Adventures of Huckleberry Finn.

“The complaints raised regarding the books have allowed us to examine why we mandate these books,” school district Superintendent Matt Hill wrote in a letter sent to district families and staff.

“When these books were selected, they were not intentionally selected to guide us through conversations of race and racism. In addition, the complaints have created the space to have brave conversations, not just about the books in question, but also about our district’s policies, practices, and culture,” he continued. “In my opinion, the number one goal of American public education is to provide access and opportunity to all students. We must constantly review our educational system to ensure we are making progress towards this goal. Only in doing so can we actually face what must be changed.”

In protest of the decision, Rob Raede, a YAF donor decided to sponsor a giveaway of the banned books.

“These books are classics of American fiction precisely because they address uncomfortable historical truths from our past,” Raede told the YAF. “We are proud to do what we can to make sure the students of Burbank have access to this great literature, despite the efforts of the book-banning cowards on the school board to deny to their students the lessons contained within.

“History is to be learned from, not erased anytime the whims of a leftist mob deem it uncomfortable,” YAF’s spokesperson Spencer Brown wrote in a statement published on the organization’s website. He explained that the giveaway would help “provide these important works of literature and do what the Burbank School Board won’t – allow its students to learn from and wrestle with the ideas in these iconic books.”

It’s worth noting that the school district did not prohibit students from reading the five books – it forbade teachers from teaching the books in class.

According to the district’s superintendent, the books are still on book shelves in school libraries – students could read them in their own time.