Dines is looking for a platform that won't censor his material.
Share

YouTube’s cat-and-mouse games with creators and their content on the platform are at this point so frequent that they barely qualify as news.

Most observers agree that many mistakes that occur during sudden removal of videos are probably down to faulty algorithms, while YouTube’s disinterest in communicating with creators in order to explain what is happening is open to interpretation.

The latest victim of an uncanny case if content removal is Jared Dines, a musician and YouTuber whose channel has 2.77 million subscribers, and who on April 11 announced that one of his videos was removed for violating the giant’s guidelines. 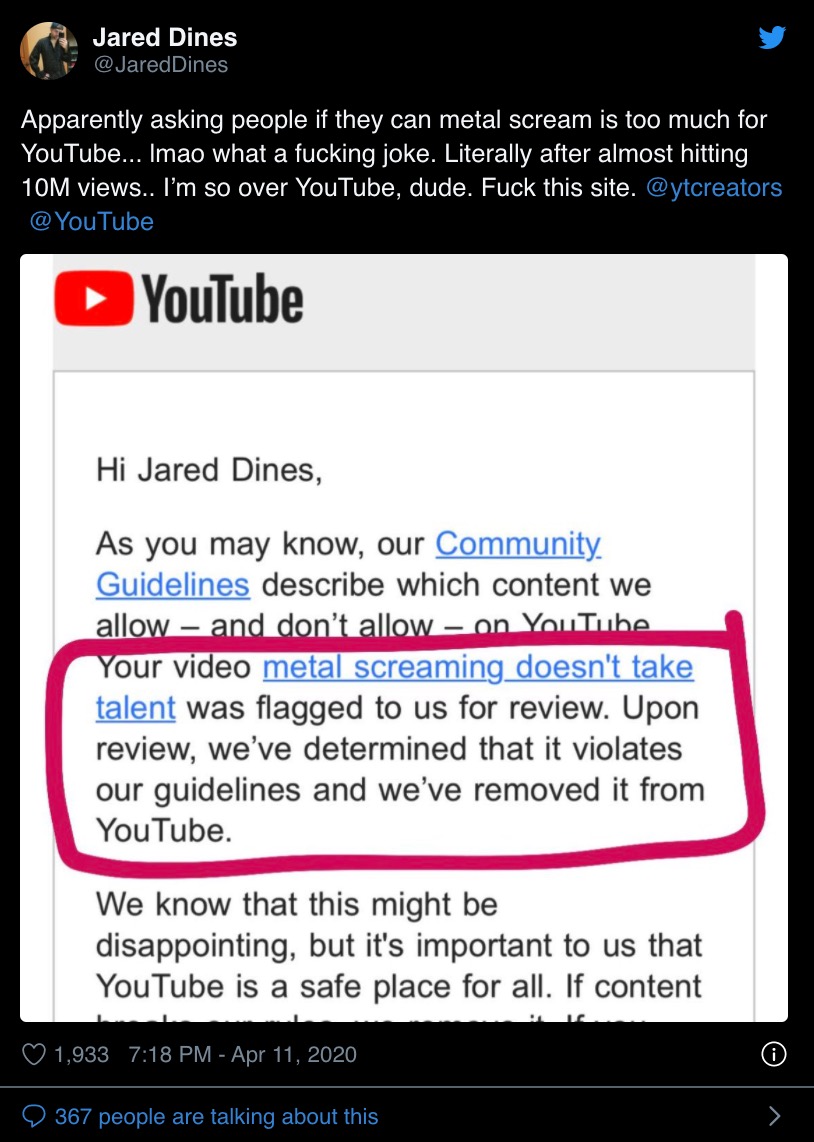 Tagging both @ytcreators and @YouTube, Dines’ message was, “fuck this site” – but not before announcing that his content about “metal (music) screaming” had been flagged – and just as it was about to receive 10 million views.

This is pretty serious business being put at risk here, but YouTube’s business is much bigger, while it has no proper formal relationship with creators that would afford them any serious rights or protections from its errors or whims.

A screenshot of YouTube’s message that Dines published in his tweet says the video, entitled, “Metal screaming doesn’t take talent,” got flagged, reviewed, and removed for the purpose of keeping YouTube a “safe space.”

A while later, the musician returned with another thought: how about creating a cutoff at who YouTube can mistreat, say at the 1 million subscriber mark.

“How about a system where any channel over a million subs (lets say) gets a full content review by a real person and a GREEN CHECK if they’re family friendly LIKE I ALWAYS HAVE BEEN. Then I won’t have to get my biggest videos WRONGFULLY deleted. Your system sucks,” said another tweet.

Needless to say, Dines didn’t get any further explanation regarding what rules had been broken and why the video was flagged. The mention in YouTube’s email of the video having been “reviewed” before removal also made this YouTuber suspicious that the whole thing might have been the handiwork of “some butthurt employee at YouTube who just doesn’t like me.”

Dines and many of his supporters on Twitter are angry, but without many useful new ideas: Dines thinks that another centralized giant platform like Facebook “runs things better” than YouTube, while others are suggesting switching to Amazon’s Twitch for better treatment.

“I just want a site to host my content that wont censor the fuck outta me!,” Dines said in one of his many tweets on the subject. But it would seem he is looking in all the wrong places. Bitchute is the only video hosting platform committed to not censoring content.