The company that says it supports the liberal arts fired Martínez over a humorous paragraph in a 5-year-old book after employees complained.
Share 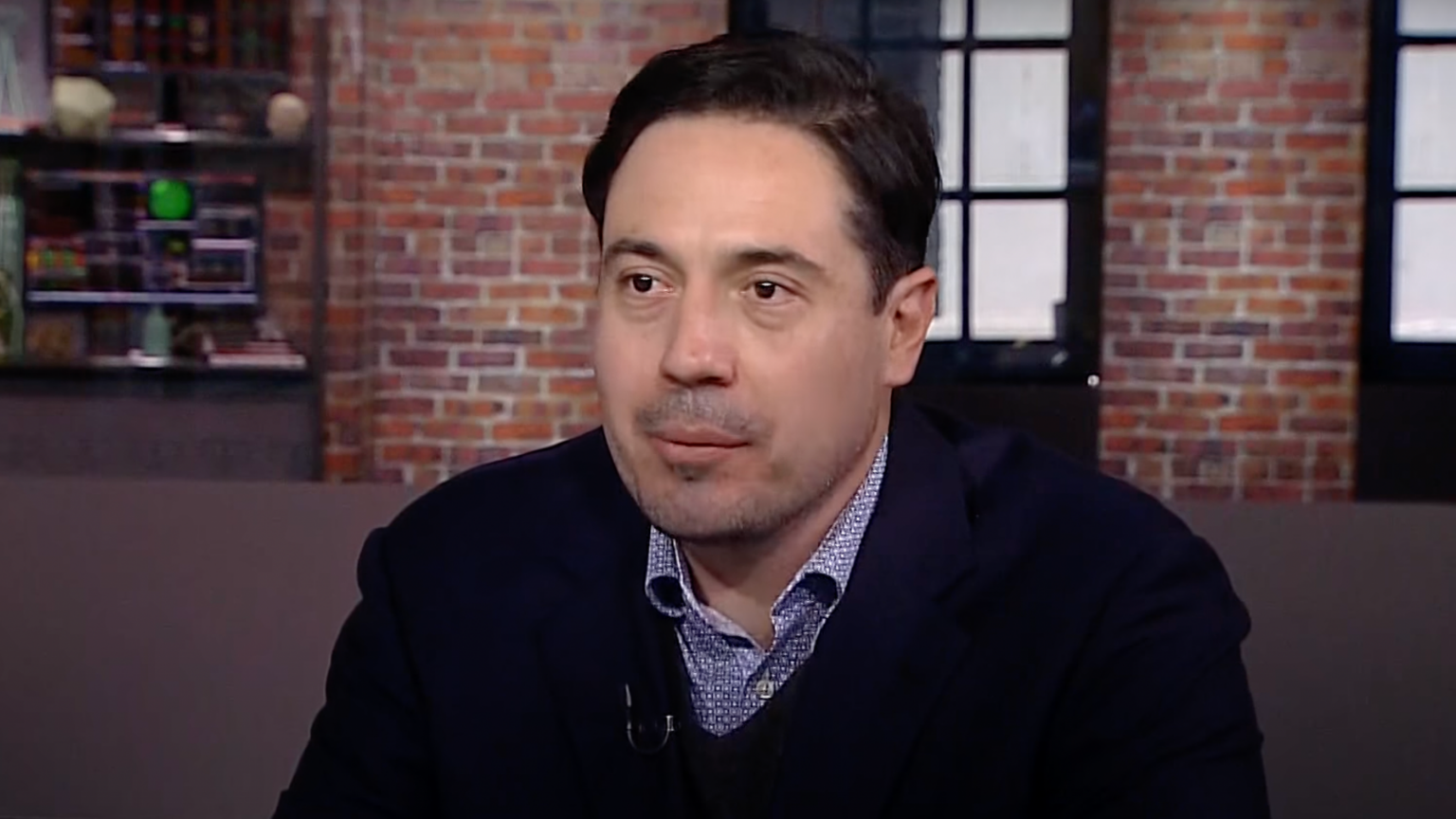 Antonio García Martínez’s short stint as a member of Apple’s ad tech team, which started in April, has just ended with a firing. This former Goldman Sachs and Facebook employee was let go abruptly for something he expressed during yet another of his career forks, that of a writer.

Apple decided to part ways with García Martínez after excerpts from his bestselling book Chaos Monkeys, now five years old, were spotlighted in a hit piece by Zac Hall of Apple fan blog 9to5Mac (who disabled comments and deactivated his Twitter account when readers didn’t appreciate the take) and some of García Martínez’s colleagues launched a petition out of concern about what the literary persona in that book revealed about his attitudes towards women. 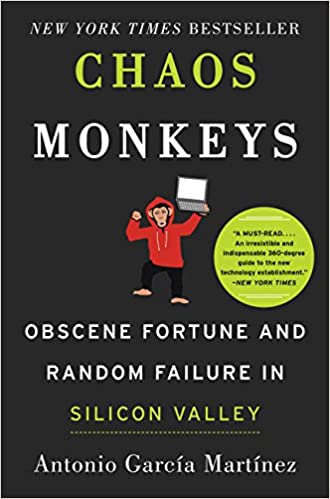 According to reports, the petition wanted Apple to investigate how García Martínez got hired despite his writing. The giant appears to have decided to cut the story short by simply firing him, as the now the former Apple engineer has revealed on Twitter. 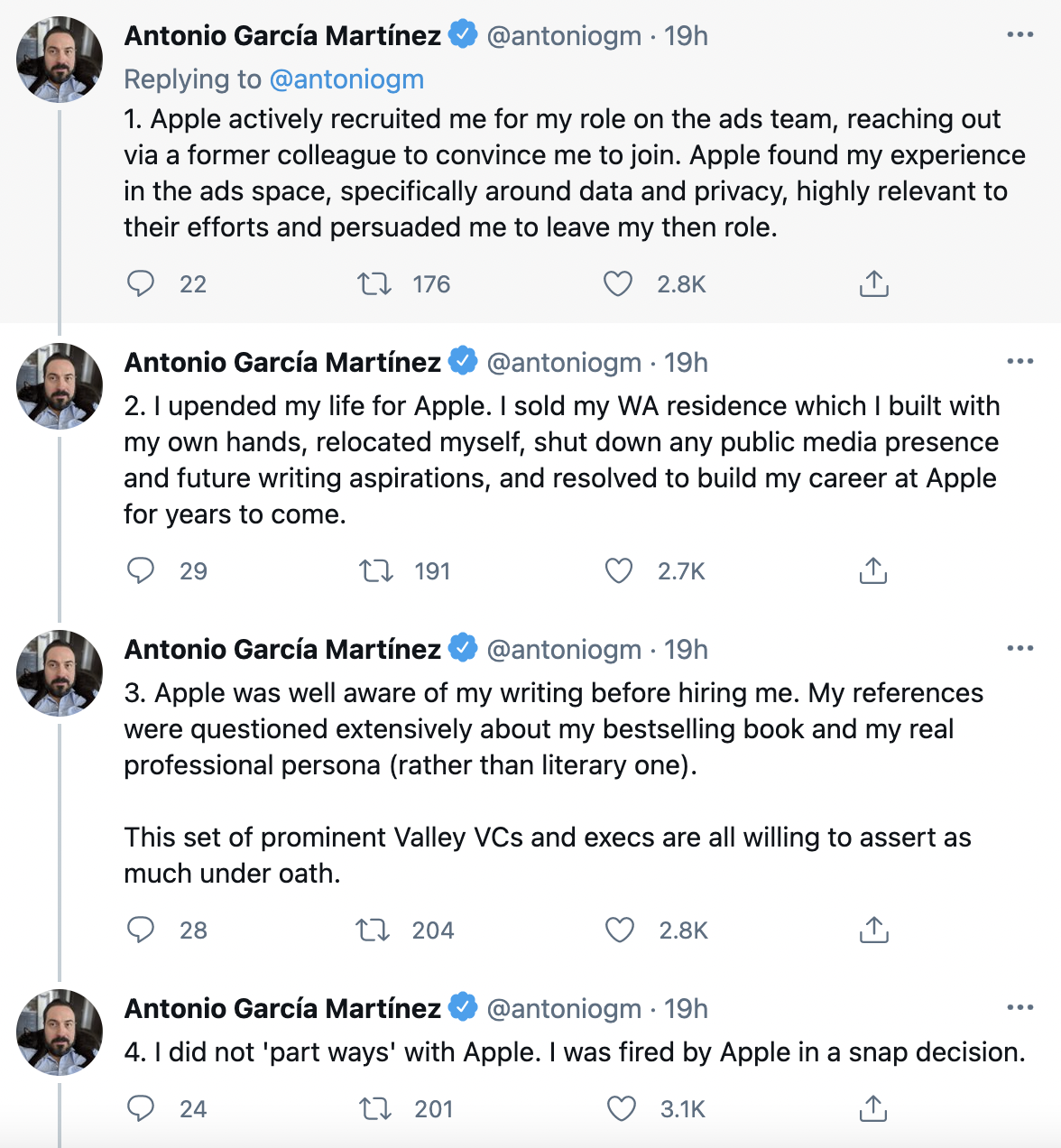 In a series of tweets, however, García Martínez claims that Apple had reached out to him to hire him for the ads team, and that the company was aware during the hiring process that he was the author of Chaos Monkeys because his references – who are willing to repeat that under oath, he said, – were “questioned extensively about my bestselling book and my real professional persona (rather than literary one).”

As for his time at Apple, García Martínez believes that a statement put out by Apple about this case intimates some transgression on his part during his employment there, which he categorically denies and considers defamatory.

He also confirms that the decision was not mutual or amicable and that he was in fact fired in a “snap decision.” Apple reacted on Wednesday when it told Bloomberg that its goal was to create an inclusive and welcoming workplace and stomp out behavior that seeks to demean or discriminate against others.

Apple’s statement was as such: “At Apple, we have always strived to create an inclusive, welcoming workplace where everyone is respected and accepted. Behavior that demeans or discriminates against people for who they are has no place here.”

But Martínez wasn’t fired for his “behavior,” – he was fired over a bestseller he wrote five years ago.

Over on Twitter, García Martínez said that a statement Apple issued after his firing “clearly implies there was some negative behavior by me during my time at Apple.” He called that “defamatory and categorically false.”

So, if his version of events is correct, it would all seem to come back to that book that he wrote, whose full name is Chaos Monkeys: Obscene Fortune and Random Failure in Silicon Valley.

Matt Taibbi goes into some detail of what the book’s controversial passages may or may not be, and analyzes and justifies them; but his main complaint is that Apple was yet another company to give in to internal dissent coming from employees, and that the giant’s own practices make this particular firing and the reasoning behind it look very hypocritical.

Taibbi describes García Martínez, a Cuban American, as brilliant, funny, and multi-talented – with his “confessional memoir” in terms of the Big Tech culture likened to the role Michael Lewis’s Liar’s Poker had in the finance world.

García Martínez is praised for approaching his writing from a place of sincerity rather than scheming and making the book into a future resume (it certainly didn’t turn out to be that.) Taibbi even speculates that the idea of a “quiet life” in tech was what motivated García Martínez to eventually drop his pursuit of a literary career.

According to Taibbi, the parts of the book that most likely caused the furore and led to García Martínez’s firing, had to do with his depictions of personal relations.

“Characteristically, they’re painted as comedies, where his personal life is depicted as an unpredictable third party over which he has little control – only occasionally, it seems, does it even listen to his suggestions,” says Taibbi.

The way García Martínez portrays his relationship with a “strong” woman (the mother of his kids) named “British Trader” as compared to Bay Area’s “soft and weak” feminists who would not be useful in a, say, alien invasion – is said to be less of a wannabe expression of machismo and more of a comedic recount that does not aim to stereotype women working in tech:

Most women in the Bay Area are soft and weak, cosseted and naive despite their claims of worldliness, and generally full of shit. They have their self-regarding entitlement feminism, and ceaselessly vaunt their independence, but the reality is, come the epidemic plague or foreign invasion, they’d become precisely the sort of useless baggage you’d trade for a box of shotgun shells or a jerry can of diesel…British Trader, on the other hand, was the sort of woman who would end up a useful ally in that postapocalypse, doing whatever work—be it carpentry, animal husbandry, or a shotgun blast to someone’s back—required doing.

His preference for broad-shouldered women aside – what followed after García Martínez, such as he is, was approached (apparently vetted) and then hired by Apple was blogs and mainstream tech media descending on his book to pick it apart and prompt calls for Apple canceling his presence in its ad tech team, immediately. And so it happened. 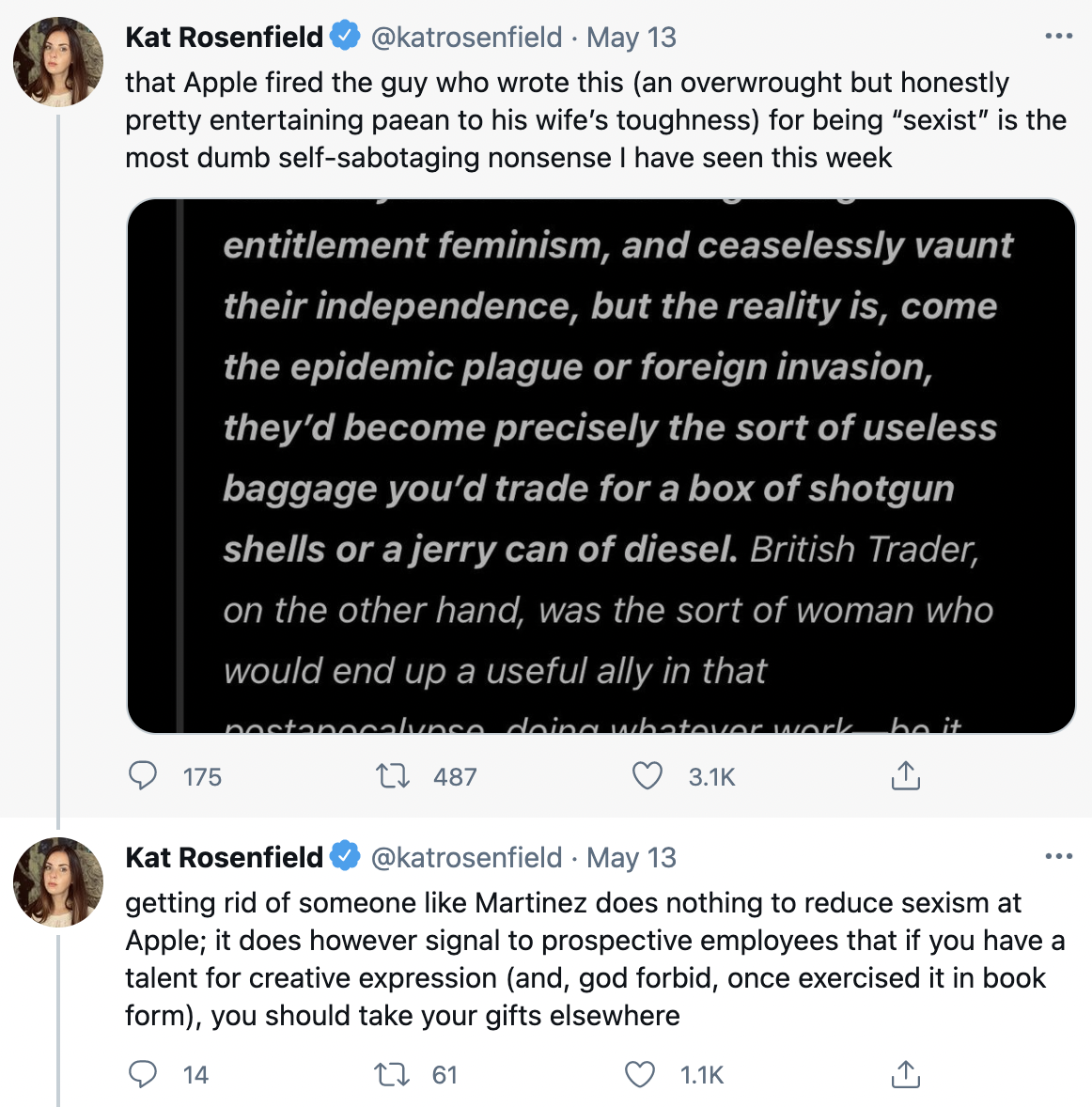 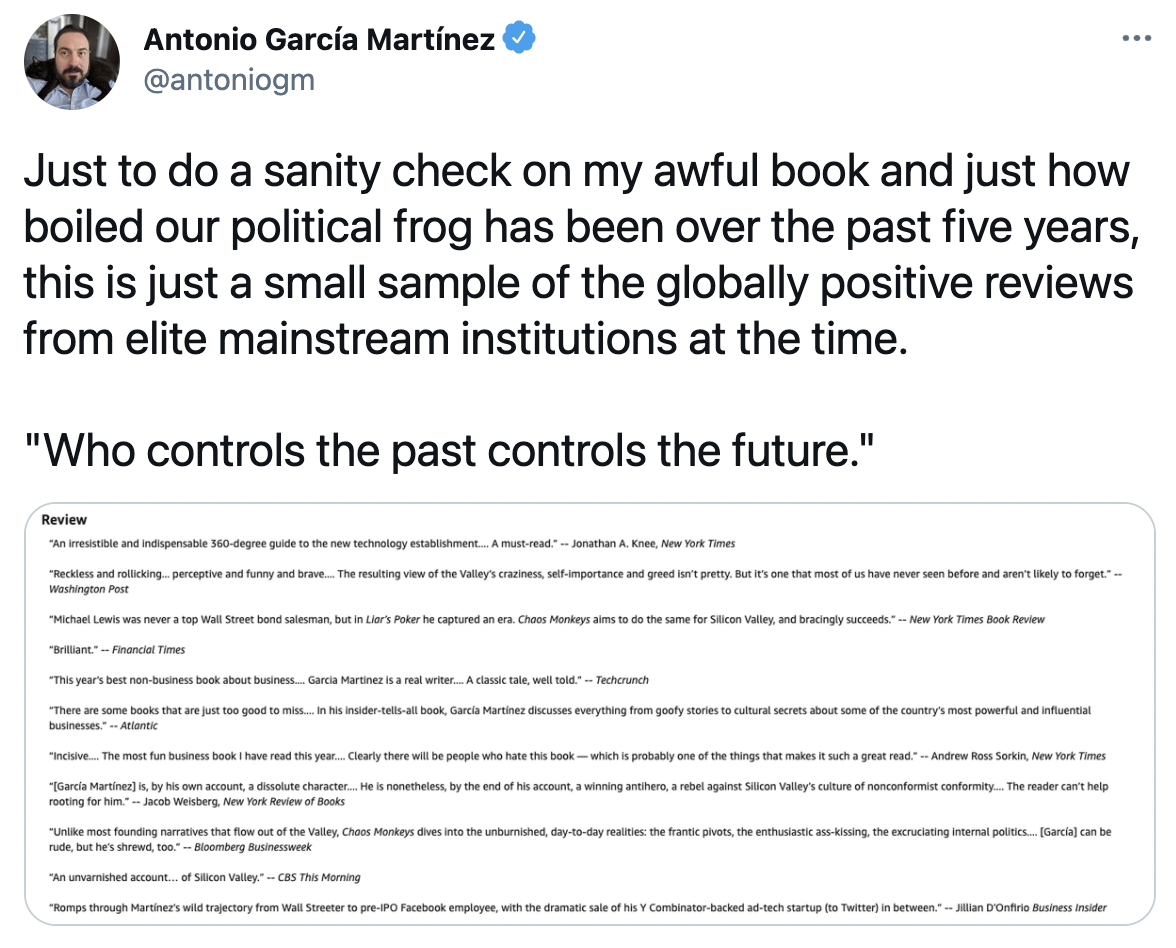