Western platforms are banned in China, but Chinese diplomats feel the need to use fact-checking to deflect criticism.
Share

Diplomats backed by the Chinese government in different parts of the world have been given the task of promulgating information on social media that will attempt to clean up the image of the country.

Sharing supposedly “verified” information in the form of a fact-check, both the Chinese embassies and the Chinese Foreign Ministry have launched an offensive to try to deny negative data about COVID-19 and China&rsquor;s involvement. 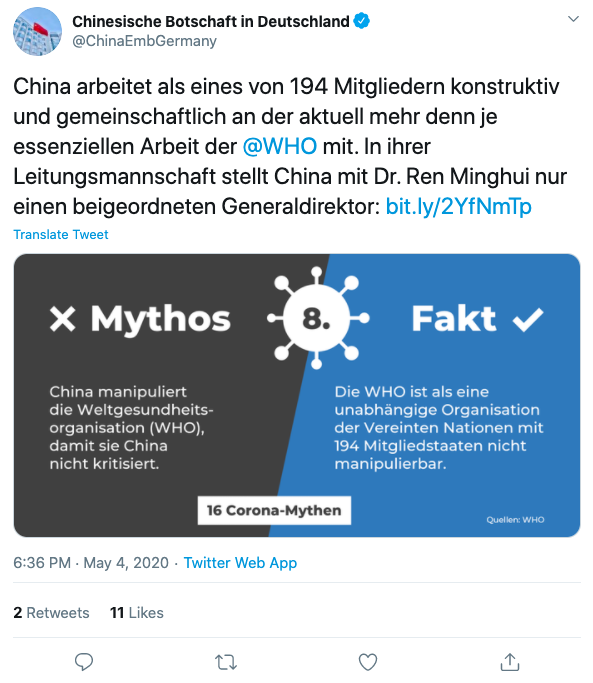 Although this is not the first time that the country has tried to defend itself against the accusations by sharing information from state-run media, since the beginning of May the narrative has changed to add that these reports come from scientific studies and certified sources.

Interestingly, all publications follow a similar structure regardless of the embassy that promotes them. These posts list a series of data that have allegedly been manipulated to make the people believe that the Chinese government is the bad guy, and then they deny them by providing their own official sources.

An example of this was at the Chinese embassy in Cape Verde, which published data on various social networks claiming that they were verified information as highlighted by Poynter. This data, however, had previously appeared on the social networks of other Chinese embassies, such as the one located in Germany, which wrote an article called “Sixteen myths and truths of China during the COVID-19 pandemic”.

An example of one of China&rsquor;s propaganda video that&rsquor;s been uploaded to Western social media platforms.

The Chinese embassy in Malaysia, meanwhile, has created a new periodic Facebook section called “The Rumor Buster”, which, as the name suggests, shares “verified data” about the COVID-19. Although its last publication was on May 2, it achieved great notoriety on the social network as it claimed that the virus had not originated in Wuhan City.

However, the most important article called “Reality Check of US Allegations against China on COVID-19” comes from the Foreign Ministry of China, and it uses the Xinhua news agency, which is run by the government, as the source. This article refutes 24 data from the United States about COVID-19, including the origin of the virus, the governments&rsquor; management of the pandemic, and the alleged propaganda that the Asian country has made.

For Puma Shen, Doublethink Lab&rsquor;s director, this is the only way for China to shape public opinion outside its borders. The problem is that this could cause mistrust in the use of fact-checkers by users, losing the purpose to use them.