Brian “Buck” Henry, who happens to be the mayor of Pawleys Island, South Carolina – as well as the owner of Palmetto Cheese, had made comments about the Black Lives Matter movement on Facebook. We reported on his case last month.

He was heavily attacked for his opinion and asked to step down from his position, with some people even going to the lengths of asking others to stop buying Palmetto Cheese.

In August, Henry vented his frustration and wrote a lengthy Facebook post expressing his opinions on the current state of affairs. Discussing the death of two white individuals gunned by a black man, Henry said that the BLM movement is allowed to “lawlessly destroy great American cities and threaten their citizens on a daily basis.”

Over the last couple of weeks, online activists have targeted retailers, bombarding them with messages to stop selling cheese products from Henry’s company.

The retail giant Costco, after the controversy surrounding Henry, has announced that it has stopped selling Palmetto Cheese across all of its outlets in America.

Not long after the news came out about Costco removing Palmetto Cheese from its stores, the hashtag #boycottcostco started trending on Twitter. Several netizens seemed frustrated with the fact that political opinions are interfering in matters of business unfairly.

“We don’t hurt people in this country because of their political opinions. Comments were blunt but not racist. #boycottcostco,” tweeted a user. Some have also spoken about how everybody is being made to conform to the BLM movement. 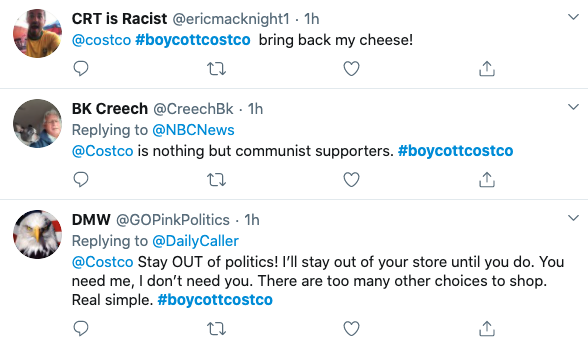 “Costco flexing their wokeness and/or giving in to the BLM mob. Criticise BLM = lose your business. #Boycott Costco,” wrote a user.

Others have also spoken about how Costco was driving away conservatives from buying at their retail outlets.

All things said and done, Costco hasn’t broken its silence on the sudden, or rather the too-obvious removal of Palmetto Cheese from its stores and hasn’t even said whether the two events were directly related. Taking the high ground, Henry, however, urged people to not boycott Costco due to the current turn of events and asked to “consider the hundreds of South Carolinians’ jobs that depend on its success.”