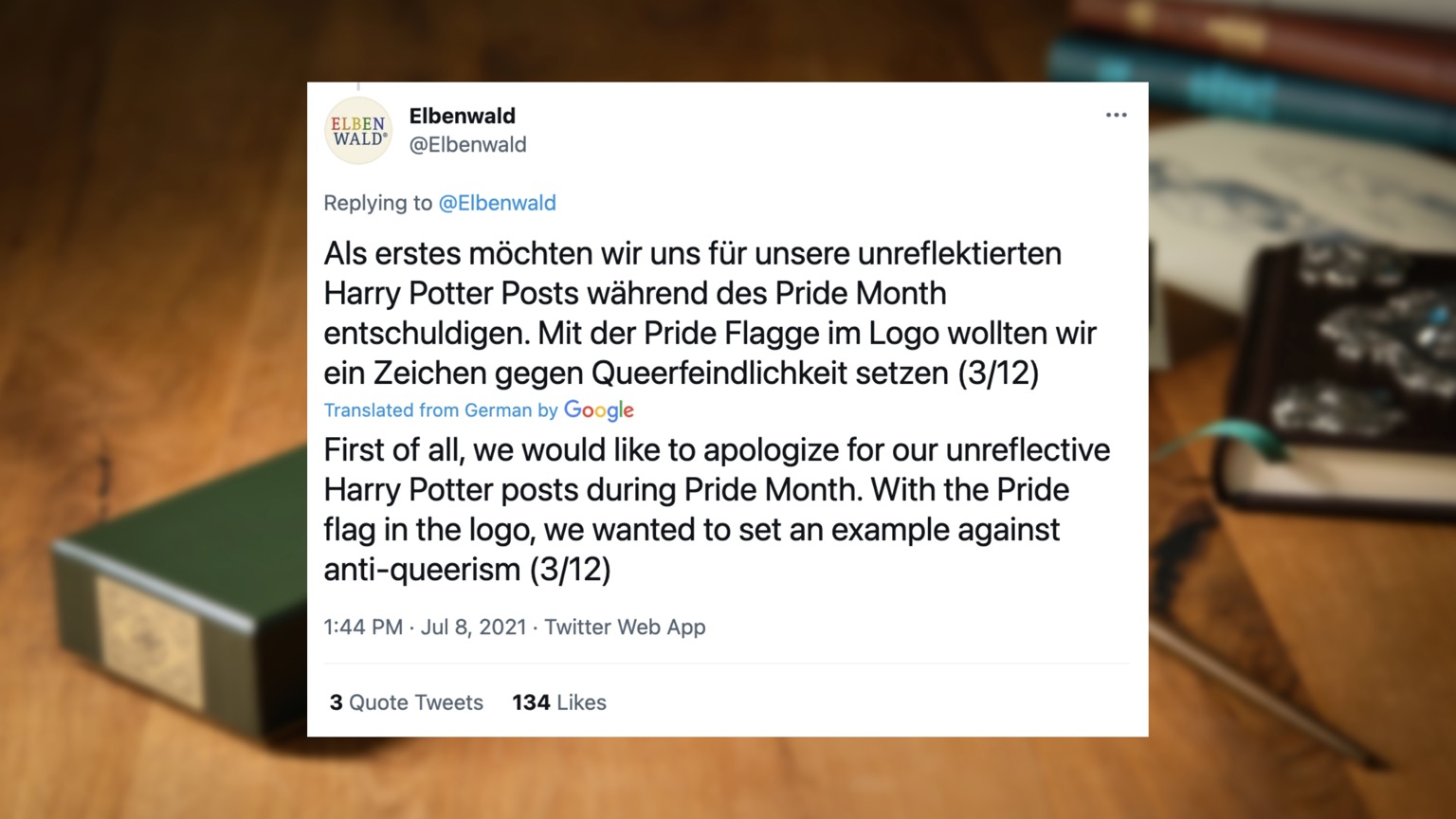 Elbenwald, one of Germany’s largest film merchandise, gamer clothing, and lifestyle product brands, has issued a lengthy apology for the offense of tweeting about Harry Potter during June’s “Lesbian, Gay, Bisexual, Transgender, and Queer (LGBTQ) Pride Month” after some Twitter users responded to the tweets by complaining about Harry Potter author J.K. Rowling.

Elbenwald celebrated the significance of June to the Harry Potter series by tweeting out trivia about these and other notable dates throughout the month of June and promoting some of its Harry Potter merchandise. 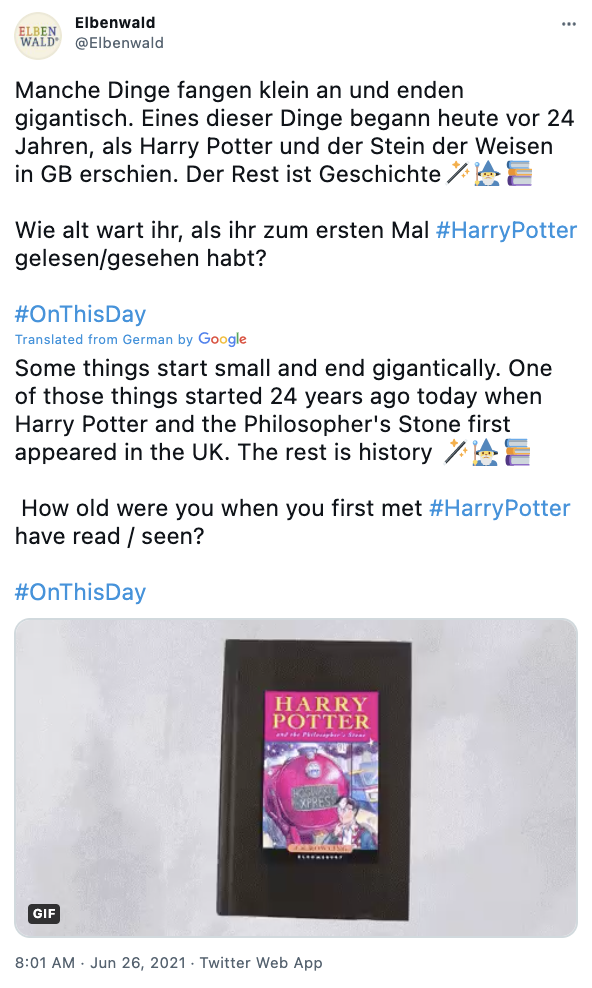 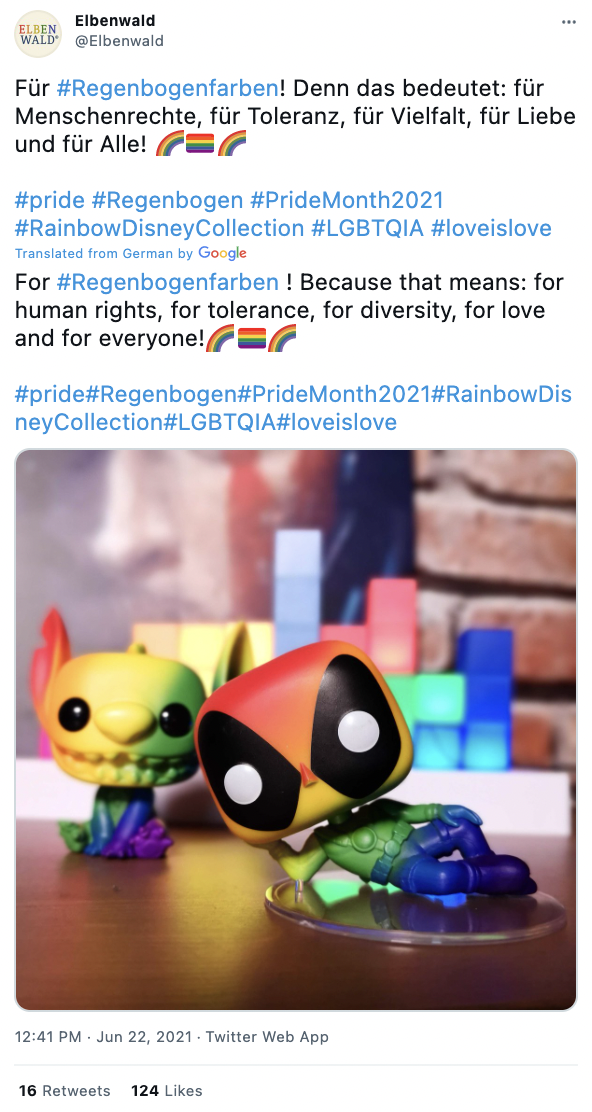 This combination of rainbows and Harry Potter attracted complaints from some Twitter users who took to Elbenwald’s reply section to accuse Rowling of making “trans-hostile statements” – an allegation that is often used by transgender activists that take issue with Rowling’s 2019 statement that “sex is real.”

Other Twitter users complained that the Pride Month accused Eldenwald of “performative allyship,” and demanded that the company “take the rainbow flag out of your profile or delete this article [a Harry Potter tweet] and apologize.” 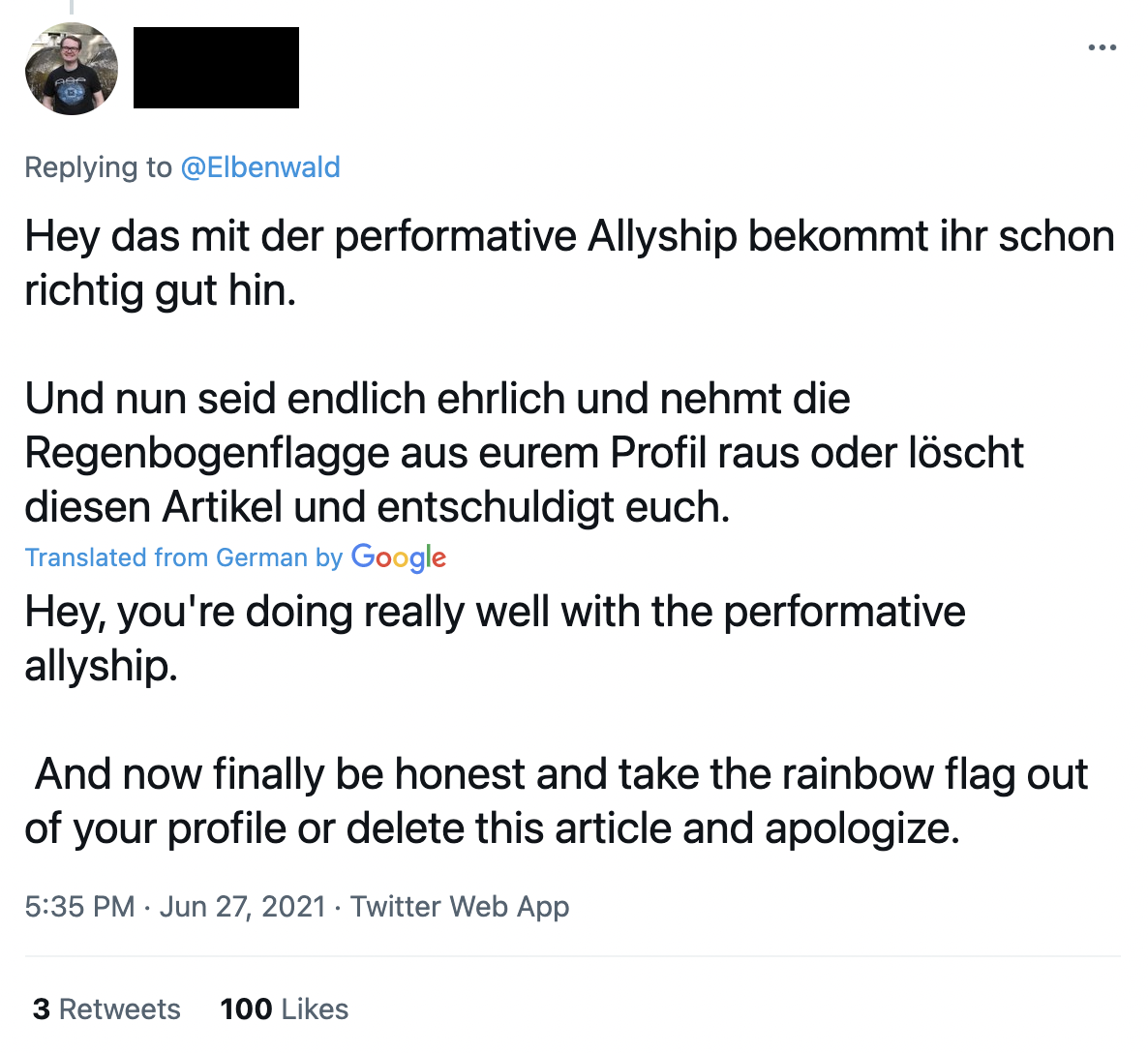 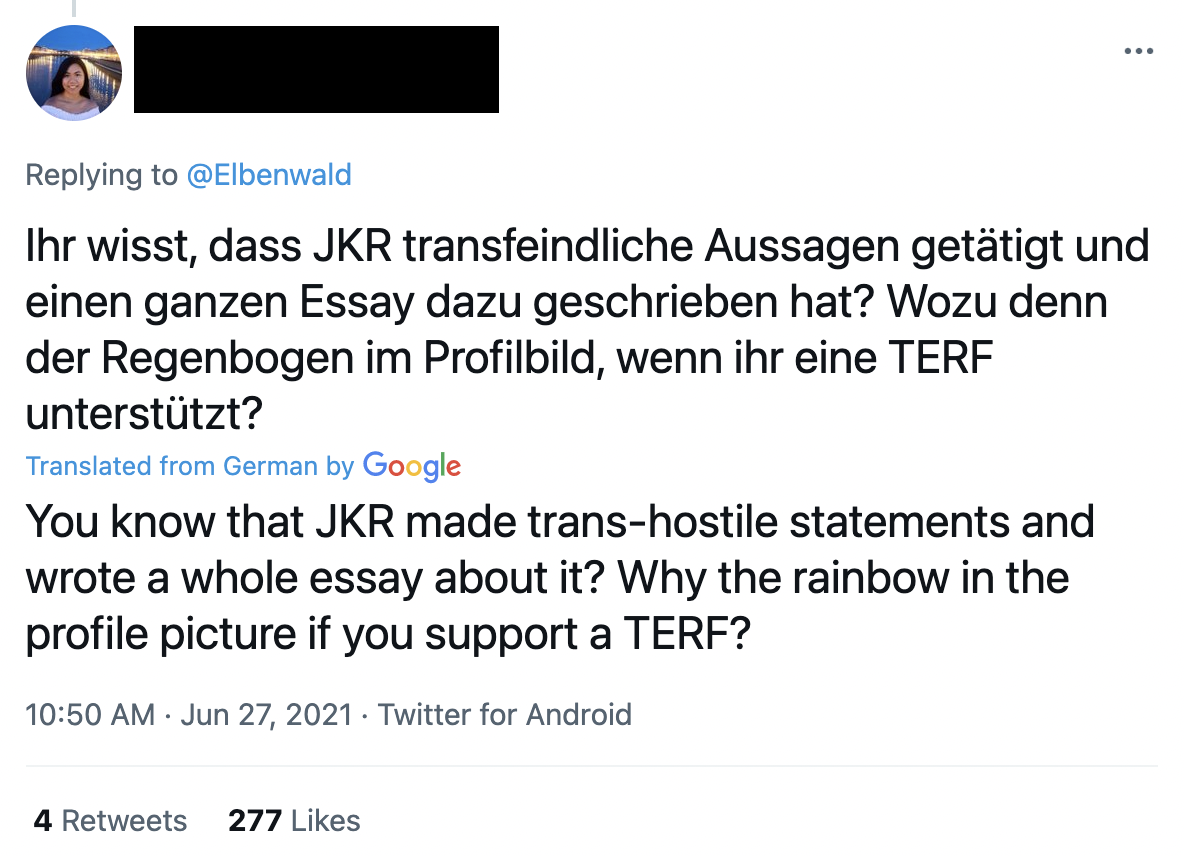 Initially, Eldenwald pushed back against the complaints and responded by saying that it doesn’t agree with Rowling’s views but “Harry Potter as a story is still a great book full of beautiful messages.” 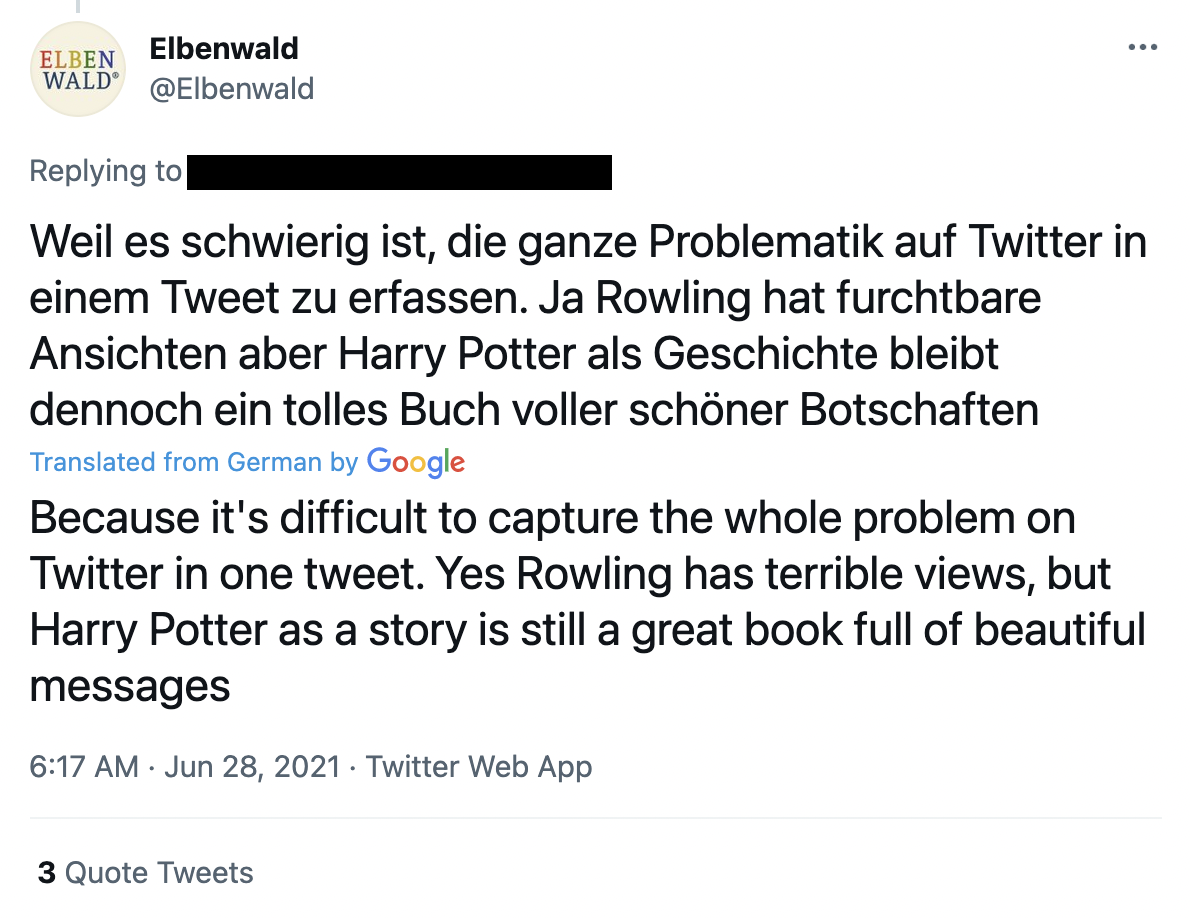 But as the pressure mounted, the company reversed its stance.

First, Eldenwald put out a statement thanking the critics for their suggestions, disavowing Rowling, and insisting that it welcomes “everyone, regardless of sexuality, ethnicity or gender identity.” This statement also highlighted that many of Eldenwald’s employees “are also part of LGBTQIA +” and that the company is “still learning about the LGBTQIA + scene every day and did not want to attack or discriminate in any way.”

While this first statement did contain some concessions about the company “still learning,” it didn’t back down on its initial support of Harry Potter.

“Ultimately, everyone makes the (purchase) decision themselves,” Eldenwald wrote in this first statement. “The same applies to the decision to completely boycott a fandom based on the opinion of the author or to continue to love the story independently. Nobody should be hostile to this or that decision. Not every Harry Potter fan and seller of Harry Potter merch automatically supports the author’s opinion.”

Many Twitter users responded by supporting this statement but some continued to complain and accused Eldenwald of downplaying “real trans-hostile agitation with real consequences for people as ‘opinion'” and “helping the author to earn money by supporting trans-hostile organizations.” 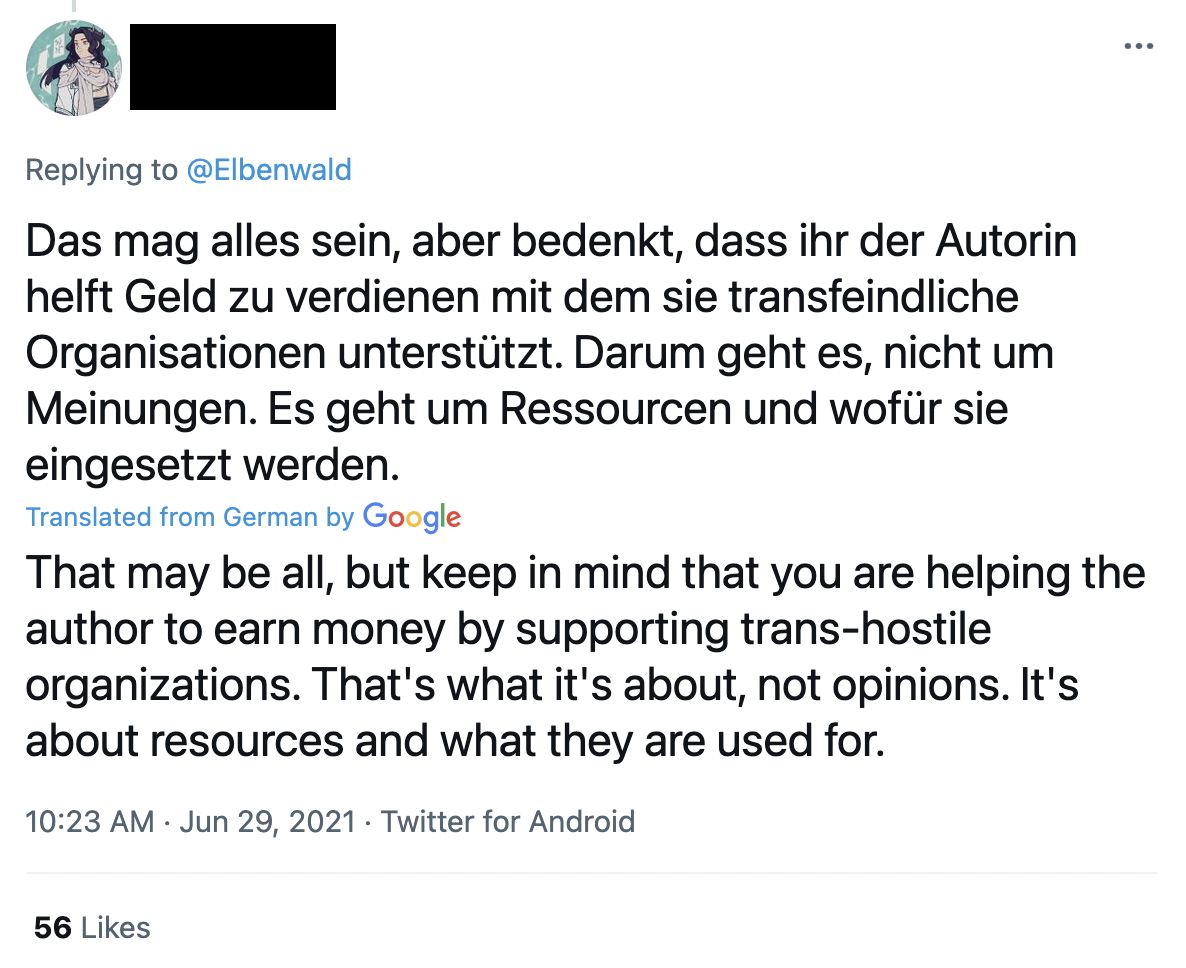 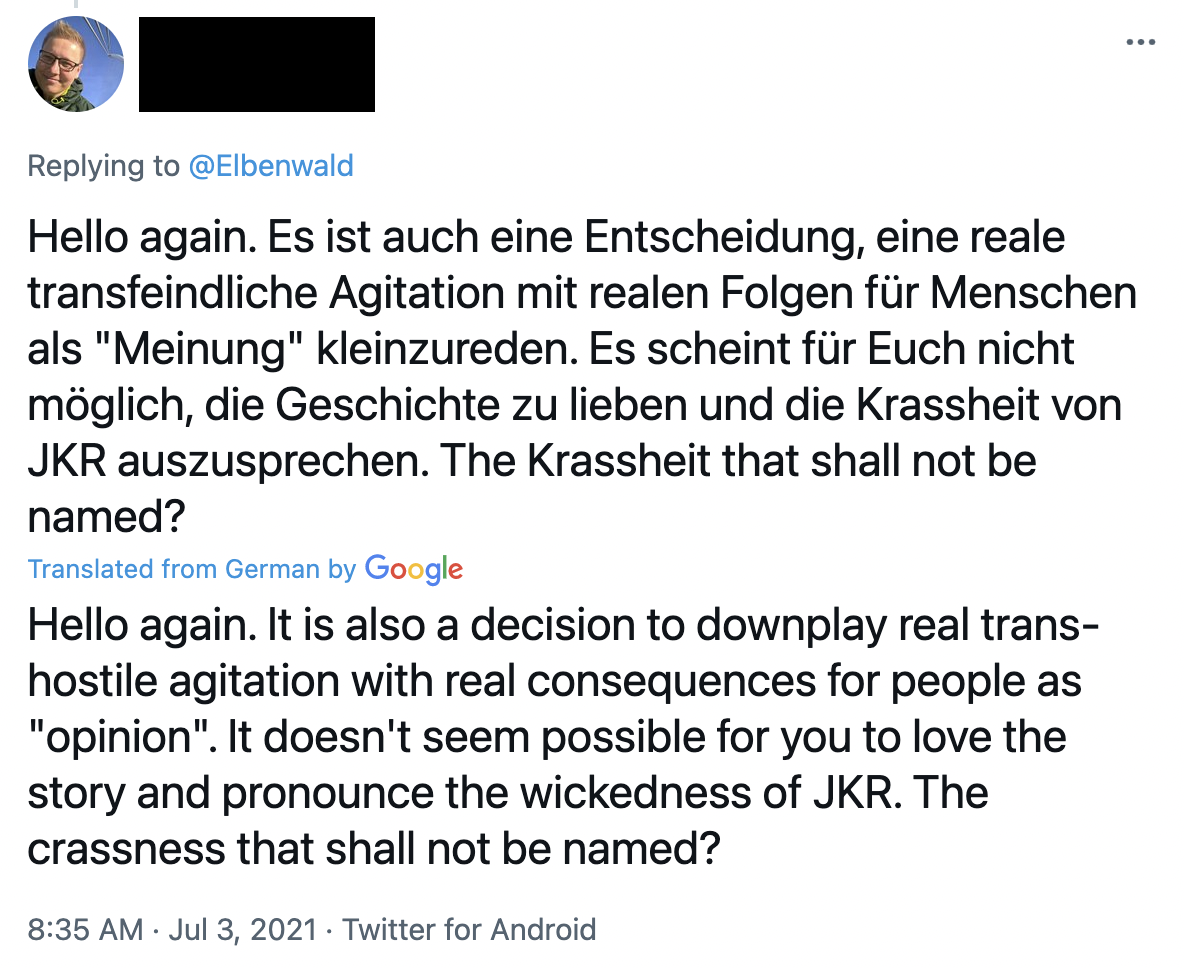 These continued complaints resulted in Eldenwald bowing to the pressure and issuing a second statement with a full apology for “our unreflective Harry Potter posts during Pride Month.” 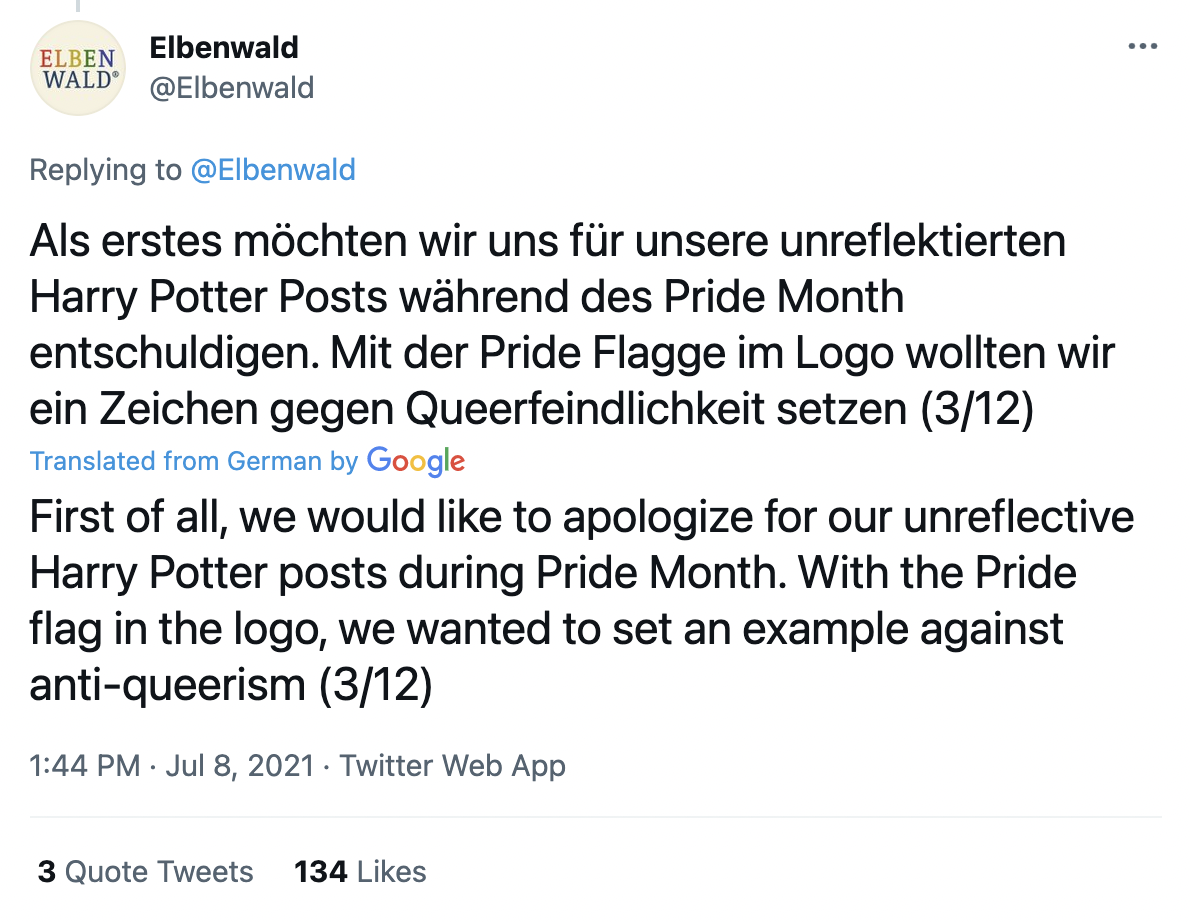 The company also noted that it had sought advice from CSD Cottbus eV, a group that’s “committed to a diverse society,” and will be expanding its range of products to “represent other topics more.”

The incident is the latest of many examples of companies and individuals facing a wave of online pressure if they support Rowling or her writing. In several instances, this online pressure has resulted in people being fired or forced to resign.