Zuckerberg insisted that the coordination only happens for "security-related topics."
Share

During today&rsquor;s Senate Committee hearing titled “Breaking the News: Censorship, Suppression, and the 2020 Election,” Senator Josh Hawley revealed that his office had been contacted by a former Facebook employee who claimed that the Facebook&rsquor;s internal task management tool, “Tasks,” was being used to coordinate censorship efforts between Facebook, Twitter, and Google.

“The tasks platform allows Facebook employees to communicate about projects they&rsquor;re working on together,” Hawley said. “That includes Facebook&rsquor;s censorship teams, including the so-called community wellbeing team, the integrity team, and the hate speech engineering team, who all use the Tasks platform to discuss which individuals or hashtags or websites to ban.”

Hawley then described how the Tasks platform was allegedly being used to “reflect censorship input from Facebook and Twitter.” 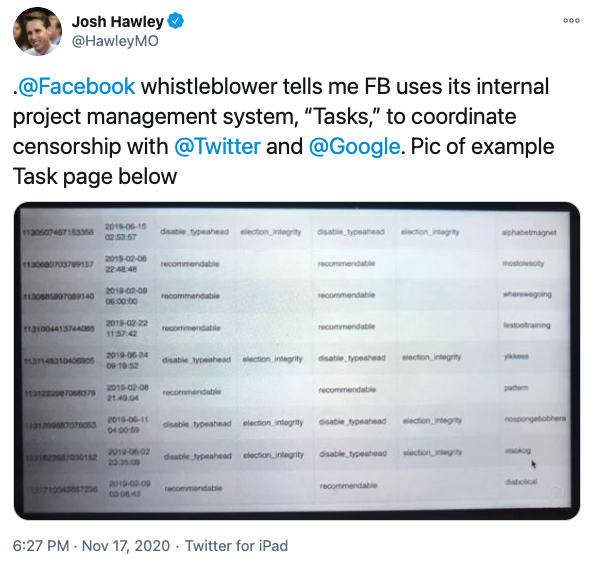 Hawley added: “As I understand it, Facebook&rsquor;s censorship teams communicate with their counterparts at Twitter and Google and then enter those companies&rsquor; suggestions for censorship onto the Tasks platform so that Facebook can then follow up with them and, and effectively coordinate their censorship efforts.”

When asked whether Facebook coordinates its content moderation efforts or policies in any way with Google or Twitter, Facebook CEO Mark Zuckerberg insisted that coordination only happens for “security-related topics” such as “signal around a terrorist attack or around child exploitation imagery or around a foreign government creating an influence operation” but that this is distinct from content moderation policies.

“Once we share intelligence or signals between the companies, each company makes its own assessment of the right way to address and deal with that information,” Zuckerberg said.

While on the surface, Zuckerberg&rsquor;s answer paints the picture that these companies are simply sharing information with each other and making their content moderation decisions independently, previous reports suggest that these independent decisions have a ripple effect across the Big Tech landscape.

When Infowars host and founder Alex Jones was mass banned from most of the major tech platforms in 2018, The New York Times reported that Zuckerberg was initially considering whether Infowars was being “brigaded” (mass reported by users as part of a coordinated effort to get Infowars banned) and considering giving Infowars a single, collective strike (which would have led to the removal of some posts but allowed the pages to remain).

However, after Zuckerberg saw the news that Apple had removed Infowars, Zuckerberg reportedly sent a note to his team confirming that Facebook would be removing Infowars&rsquor; pages.

Zuckerberg&rsquor;s admission that the Big Tech companies do coordinate for “security-related topics” which include “a foreign government creating an influence operation” also leaves the door open for the companies to coordinate censorship of a wide range of newsworthy topics.

Both of these definitions would meet Zuckerberg&rsquor;s criteria for Big Tech companies to coordinate on security-related topics.

Zuckerberg even admitted during a previous hearing that Facebook relied on “the FBI and intelligence and fact-checkers” to determine whether the New York Post story was “Russian interference.”

He used the phrase “intelligence” again in today&rsquor;s hearing to describe the process of sharing information with other Big Tech companies.

Does this mean that information from other Big Tech companies influenced Facebook&rsquor;s decision to censor the New York Post story?

While Zuckerberg is unlikely to reveal the exact process that resulted in the censorship of the New York Post and the “security-related topics” phrase that he used to justify coordination between Big Tech companies is open to interpretation, we know that Facebook and Twitter both censored the story.

We also know that both companies acted within hours of each other and that based on Zuckerberg&rsquor;s testimony today, there are circumstances where these companies coordinate.