Another attempt to cancel someone over their conservative views is underway.

Gaming news outlet Kotaku is leading the attack on the developer of an upcoming Harry Potter game over his history of running a conservative YouTube channel, which included supporting the Gamergate movement and attacking the radical social justice movement in the gaming industry. The developer is now facing calls to be fired.

Warner Bros is working on a Harry Potter game titled “Hogwarts Legacy.” The developer of the game, Troy Leavitt, is under attack for his conservative views.

An article by Kotaku accused Leavitt of running “a reactionary YouTube channel focused on attacking feminism and social justice for over a year.” The article continues to justify its criticism of Leavitt by citing some videos he published that attacked the social justice movement, defended “cultural appropriation, and equated the social climate today to that of 1984.” 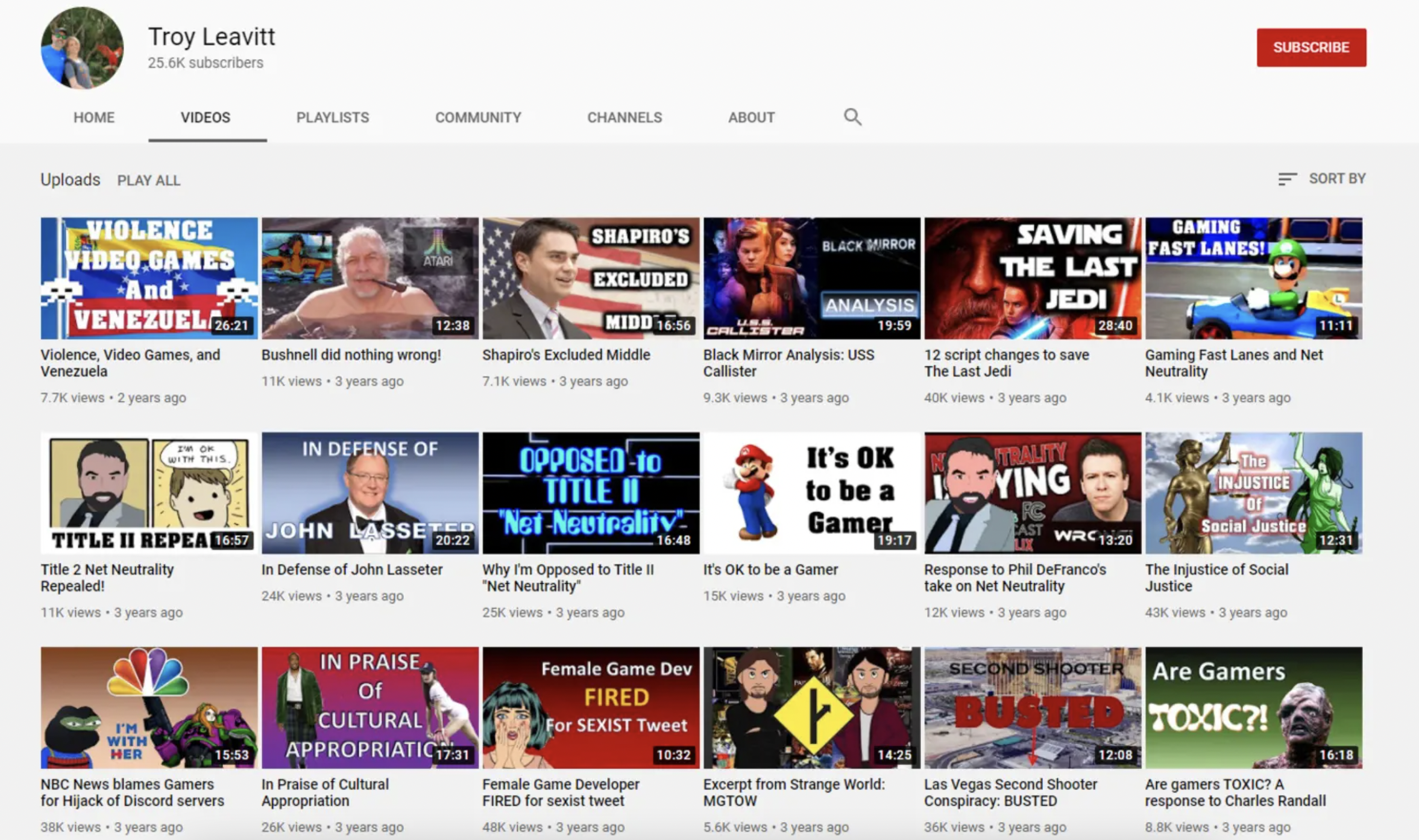 A journalist at the outlet, Nathan Grayson, shared a screenshot of Leavitt’s statement from 3 years ago when he was hired by Warner Bros, The statement read:

“Some of you have expressed that, due to my commentary on some game industry controversies and my sympathies for the Gamergate movement, that I might have a difficult time should I ever want to return to professional game development. I’m happy to say that even though I disclosed my YouTube channel to WB Games, it didn’t appear to be an issue for them.

“Not that they endorse anything that I’ve said, of course, but at least they seem more concerned with making good games than with pushing some kind of social justice agenda, so there is hope.”

Grayson criticized Warner Bros Games, saying they don’t care about “far-right extremism,” instead they act as if they didn’t know about it. 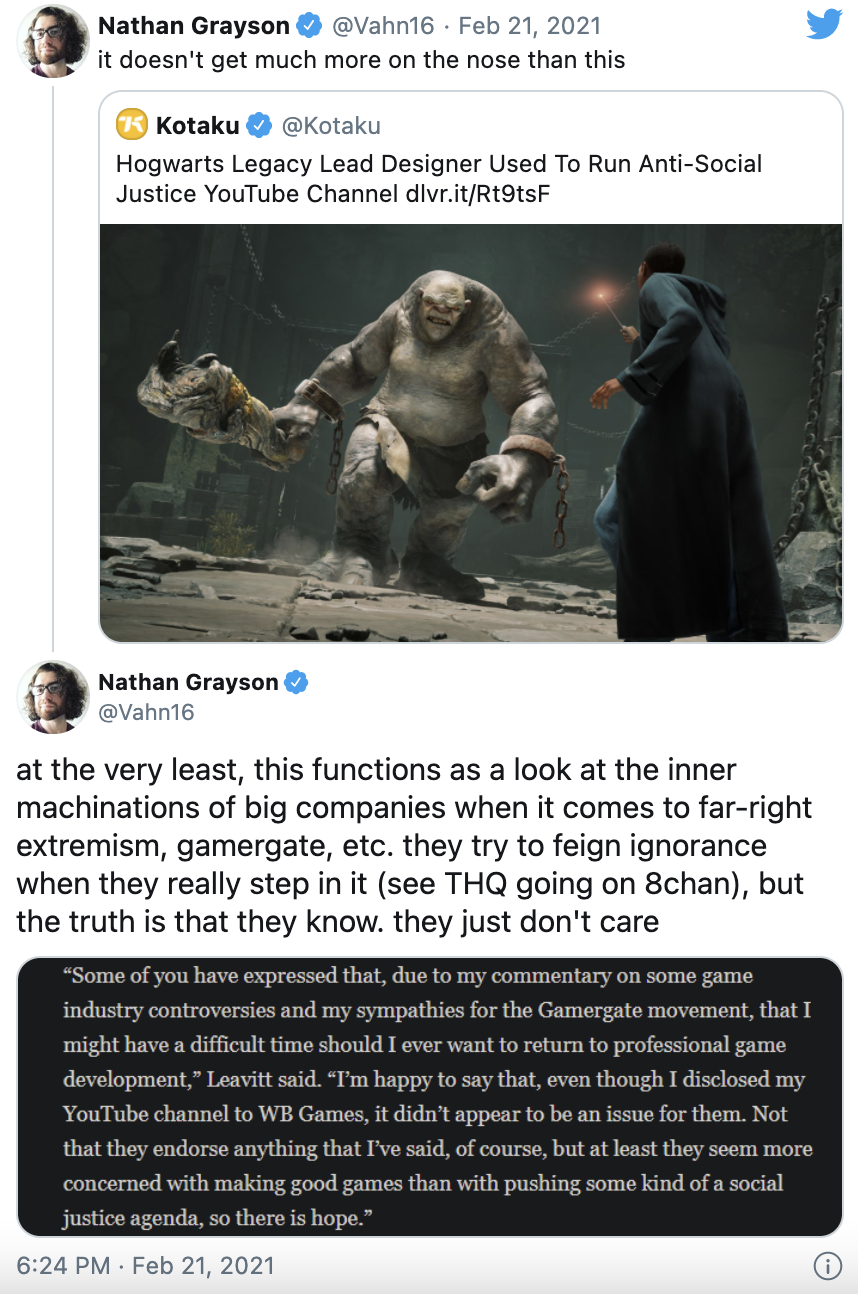 “At the very least, this functions as a look at the inner machinations of big companies when it comes to far-right extremism, gamergate, etc. They try to feign ignorance when they really step in it,” Grayson wrote in the tweet where he shared the screenshot of Leavitt’s statement when he got hired. “But the truth is that they know. They just don’t care.”

Grayson’s relationship with female game developer Zoe Quinn is what started the Gamergate controversy in 2014. Some gamers took issue with lack of ethics in Grayson’s positive reviews of his girlfriend’s game, “Depression Quest” without disclosing their relationship.

Another character who rose to prominence during the Gamergate saga, games developer and unsuccessful candidate for congress, Brianna Wu, urged followers to not buy Leavitt’s upcoming Hogwarts Legacy game. 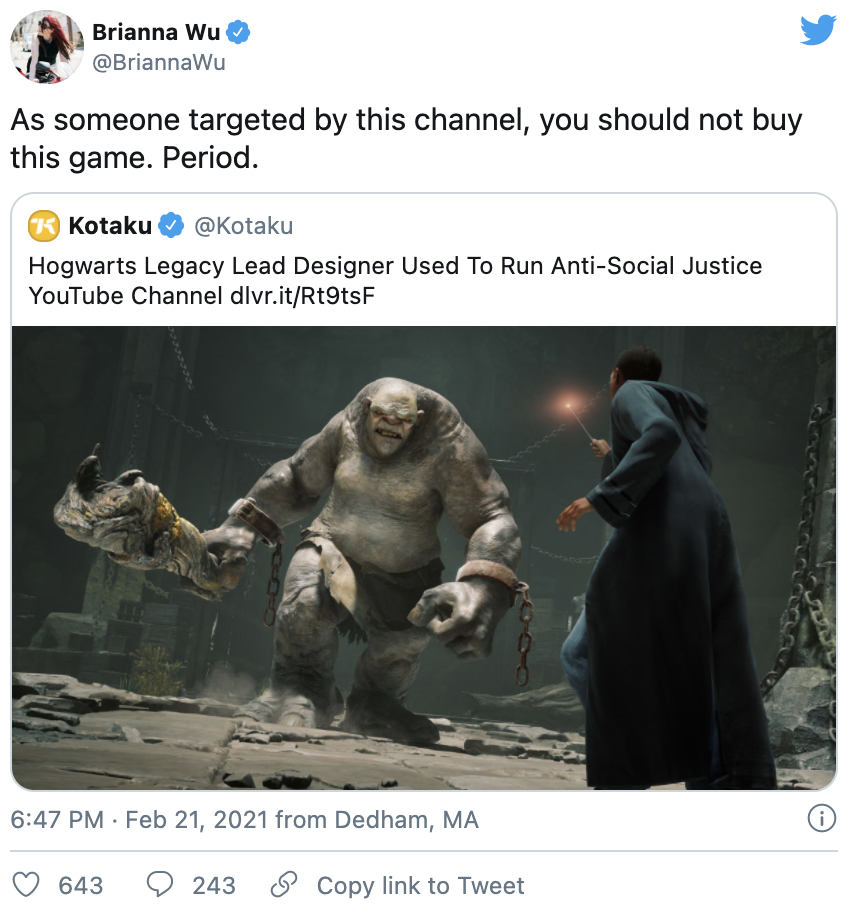 Other attackers are taking issue with the fact that the game is based on Harry Potter. The famous fantasy novel series’ writer, JK Rowling has hit headlines over the past year for her skepticism of giving puberty blockers to children and supporting the notion of not diminishing the idea of women – statements that activists tried to say were transphobic.

The article about Leavitt by Kotaku says Rowling has “waged a tireless campaign against transgender rights.”

WB Games is yet to comment on the Leavitt controversy or cave to the growing mob – but it’s clear another co-ordinated cancelation witch hunt is already underway as other outlets have joined in.