"We have stopped the project" an Archive Team member said.
Share

Gfycat is a platform allowing users to upload and host GIFs, videos, and memes – but it’s also a business that has as over the last couple of years raised over $10 million to sustain it as a viable proposition – thriving off the contributions made by its users.

And now, Gfycat is saying that it will shortly remove all anonymously posted images. In and of itself, this decision could have many motives – including innocuous ones, such as the cost of keeping this content up.

As ever – the best course of action when making any controversial decision would be to explain the reasons behind it, instead of leaving everyone confused and speculating. But from the giants like Google, all the way to companies like Gfycat, this practice will obviously take a long time yet to take root.

In any case, where things got more complicated here is when Archive Team – whose purpose is to preserve and archive digital content on the web, particularly from lower-profile sites and services – attempted to salvage content from Gfycat.

As the project’s lead Jason Scott announced on Twitter – in line with their purpose on the web, Archive Team had started to download what they viewed as at-risk works over on Gfycat.

On November 5th, @Gfycat announced they were going to delete scads of content off their site in 15 days. @archiveteam began trying to download some of the at-risk works. @gfycat has threatened to sue and is demanding compensation for the downloads. We have stopped the project. pic.twitter.com/jdBeQA00JX

However, Gfycat swiftly reacted by threatening a lawsuit and demanding compensation for the downloads. 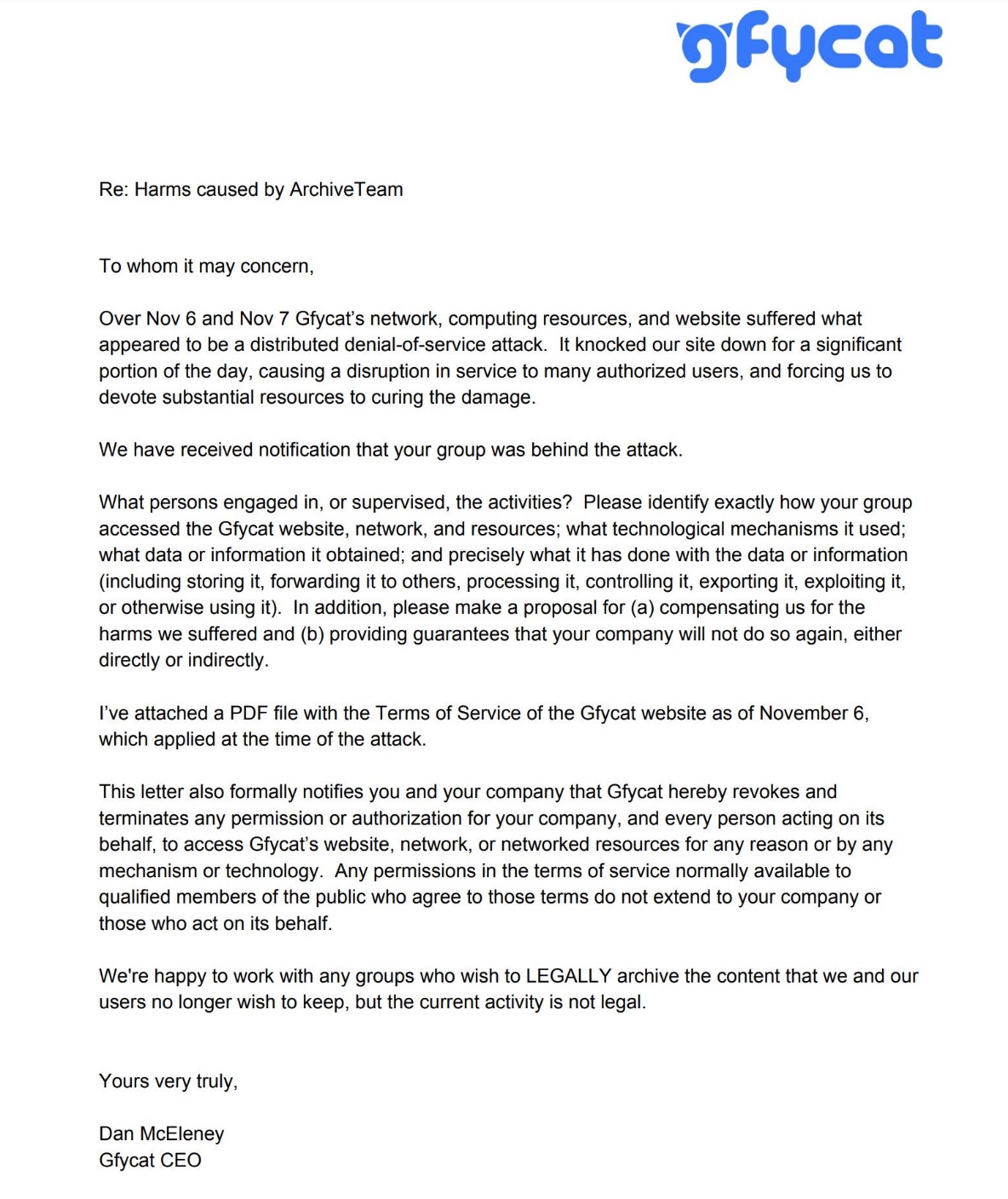 “We have stopped the project,” Scott revealed on Twitter.

He also posted a copy of a letter sent to Archive Team by Gfycat CEO Dan McEleney, and announced that the organization would not continue its fight to save content from this particular corner of the web now being erased for good. He also shared that Archive Team might need the community to step in and help with legal costs in case Gfycat decides to sue.

One of the comments left to Scott’s tweet noted that Gfycat, as a company ostensibly making a living “off stealing other people’s content” – now all of a sudden seems to want to claim ownership of it – all the way to keeping the rest of the internet out.