Harry The Owl was criticizing another Twitter user who was celebrating the death of a woman who today died of cancer. The tweet got him banned from the platform.
Share

“Thoughtcrime” is a concept imagined by British author George Orwell in Nineteen Eighty-Four (1984) – hopefully, that classic novel everyone has by now not only referenced but also read.

In it, “thoughtcrime” is one of the compound words Orwell came up with to describe the way dissent is designated and suppressed in the utterly bleak, imagined dystopia – one that, nevertheless, seems to be gaining ever more disturbing relevance with every passing year.

The Twitter account Harry The Owl, the account of a man currently suing the College of Police for investigating his retweets as a “hate incident” earlier in the year, has today been banned from Twitter. 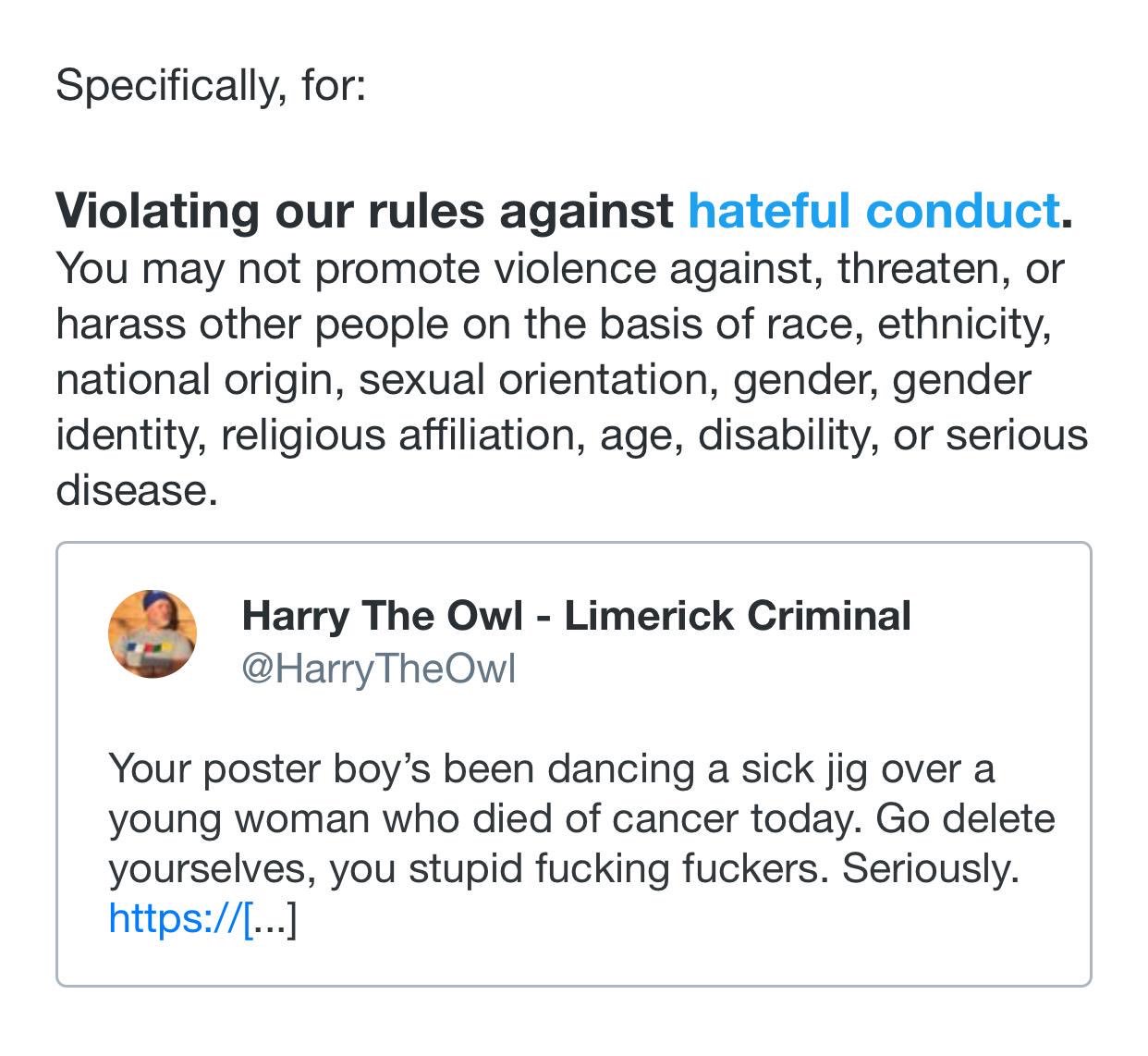 Harry The Owl was criticizing another Twitter user who was celebrating the death of a woman who today died of cancer. The tweet got him banned from the platform.

But Harry, the person behind the account, had already decided that his rights had been trampled on – and not by Twitter, but by the real-world police in their community – in a manner egregious enough to decide to take the case before the country’s legal authorities. The goal is pretty much to try and find out if freely expressing one’s opinion online is still allowed.

CrowdJustice – a crowdfunding platform promoting fair access to the legal system – has chosen more or less the same term to describe a case they are hosting on their platform – that of a Twitter user and a UK citizen investigated for liking a tweet containing “a gender critical limerick.” “Challenging Thought Crime: HarryTheOwl v The College of Policing,” the crowdfunding platform says, announcing the case on its website.

The man, a 53-year-old docker from Humberside identified as Harry Miller, was investigated by the local police for causing a “hate incident” by retweeting several posts that questioned whether transgender women are biological women.

The Twitter user is suing the regional Humberside police, and UK’s professional body in England and Wales, the College of Police – the authority responsible for coming up with the guidelines that resulted in branding him as the promoter of hate speech.

According to the funding page and the Telegraph, a policeman who contacted him, Mansoor Gul, explained the concept of transgenderism in following terms: “You can have a fetus with a female brain that grows male body parts and that’s what a transgender person is.”

An exchange followed, during which Miller was informed by the police officer his was indeed a “non-crime” – merely liking and reposting content of others. But, said Gul, it would still be recorded as “a hate incident.”

There was also no victim – but the policeman explained to Miller that the intervention arose from the authorities’ need to “check his thinking.”

‘Were any of the tweets criminal?’ I asked

‘Then why are you ringing me?’

‘I need to check your thinking,’ said PC Gul.

“I can’t believe what is happening in the UK in the name of transgenderism and, worse still, we’re not even allowed to think never mind talk about it,” Miller said.

In his appeal for donations in support of his legal case, presented on CrowdJustice, Miller now writes: “Fighting the establishment is costly. Doing nothing is terrifying.”

Today’s ban from Twitter is likely to increase awareness of the campaign.