Authorities are accused of being lax with user data.
Share

Security researcher “Elliot Alderson” (@fs0c131y) – is now drawing attention to how patients, i.e., “sick people” are treated by Google in various countries around the world.

Rather, it seems to be about how Google surfaces personal data of users in India, one of the world’s most populous countries and often described as one of the world’s largest, if not the largest, democracy. And it goes without saying that we all know what the “sickness” is here – it’s coronavirus.

Of course, all this must be sarcastic, right? For one thing, in this world we inhabit – we would say that “sick people” due to the vulnerability of their circumstance must be among our prime, not our last concern? And exposing any patient’s personal data, must be a particularly egregious Google offense?

As it turns out, we can think what we like – but in India at least, Google Maps had been all too happy to display any and all personal info.

A screenshot appended to the tweet seems to show a Google map view of the Indian town of Rajkot, pinpointing locations and the number of coronavirus “positives” – and positives with travel history, along with their (home) addresses displayed. As this was all happening on Google Maps – it suggests that these local authorities were free to create and put up these clearly privacy concerning if not outright violating, data, up on Google.

“Repeat after me: Even sick people deserve privacy, put their names and address on Google Maps is a bad idea…,” @fs0c131y tweet said, clarifying the situation, and their grievance with Google’s habitual lack of privacy, while a like-minded follower added: 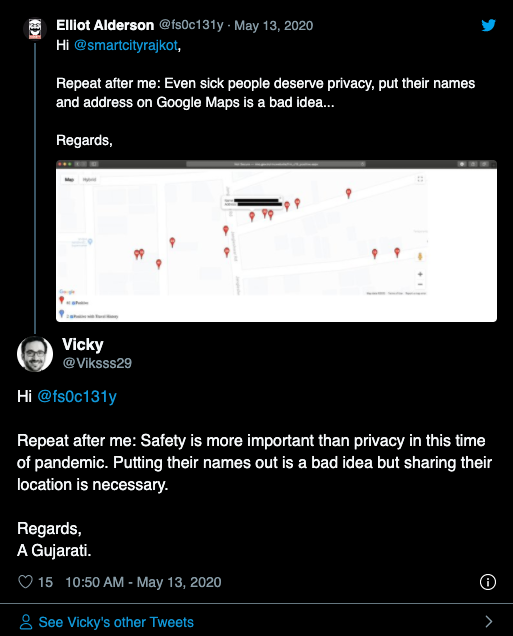 Not everyone agrees, though. Safety is more important than privacy in this time of the pandemic, one commenter, apparently based in India, said on Twitter.

Yet another suggested that having their names and addresses exposed on the web in this way might make some “innocents” (i.e., people not technically adept to the situation) actually happy, as the majority of the population has no idea why it might be bad to expose their personal data, including their names and home addresses, out on the web.

Let’s just hope these “innocents” never find out why.