Minister Louis Farrakhan, the leader of the Nation of Islam, was today temporarily kicked off of Twitter.

Farrakhan’s account had been “temporarily restricted” from January 3rd and in the last day, the account was fully suspended.

However, a Twitter spokesperson told Reclaim The Net that it was a mistake and that “The account was caught by our spam filter in error and has been reinstated.”

When Twitter accounts are reinstated, it can take some time for the followers and tweets to reappear as normal.

Farrakhan has long faced accusations of antisemitism and many had believed that this was the reason for Farrakhan’s suspension.

Before the account was reinstated, many were celebrating the suspension:

Since today is the #WomensMarch — it's worth remembering that Farrakhan's organization, The Nation of Islam, provided security to @womensmarch leaders

Beloved of many progressives and adored by ⁦@lsarsour⁩ the racist Antisemite #LouisFarrakhan has been suspended. Today is a good day ? pic.twitter.com/hEeBqbSZuO

Farrakhan had attacked “wicked Jews” in a speech he made during a ceremony celebrating the beginning of the Nation of Islam in 2006. “These false Jews promote the filth of Hollywood that is seeding the American people and the people of the world and bringing you down in moral strength. … It’s the wicked Jews, the false Jews, that are promoting lesbianism, homosexuality. It’s the wicked Jews, false Jews, that make it a crime for you to preach the word of God, then they call you homophobic,” Farrakhan said.

“I’m not an anti-Semite. I’m anti-Termite,” was one of Farrakhan’s most controversial tweets that earned widespread media attention back on Oct 16, 2018. 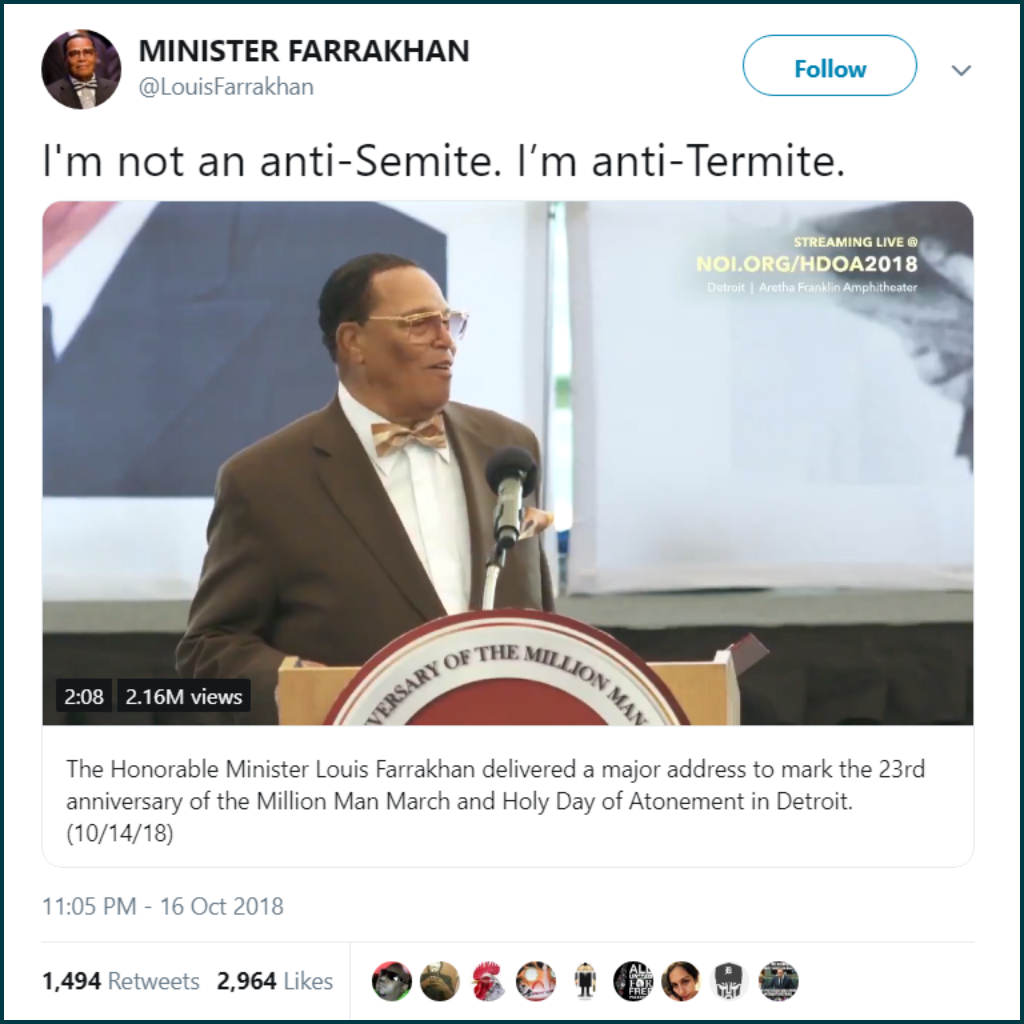 Farrakhan’s name has been in the news repeatedly this week as it’s the fourth Women’s March today – and many have speculated why leaders of Women’s March refused to condemn the antisemitism that plagued last year’s march.

The allegations came after Woman’s March leader Tamika Mallory faced criticism when she attended an event with Louis Farrakhan where he upheld several anti-Semitic conspiracy theories.

Facebook had already banned Louis Farrakhan from their platform last year in March when they controversially said they were purging several “dangerous” figures from the platform.

Many were glad to see Farrakhan suspended on Twitter today, but others expressed concern that, while they don’t agree with Farrakhan’s views, they feel he should still be allowed to participate in public conversation.

Those that thought it Farrakhan’s suspension was permanent will likely be disappointed and those that supported Farrakhan having platform will be glad it was a mistake.