The corporate media is getting a taste of its own medicine thanks to a new app designed to block misinformation-spreading content – published by the New York Times.

“Block takes the lead in fight against disinformation,” the creators of the app, called “Block the New York Times” announced on Twitter. 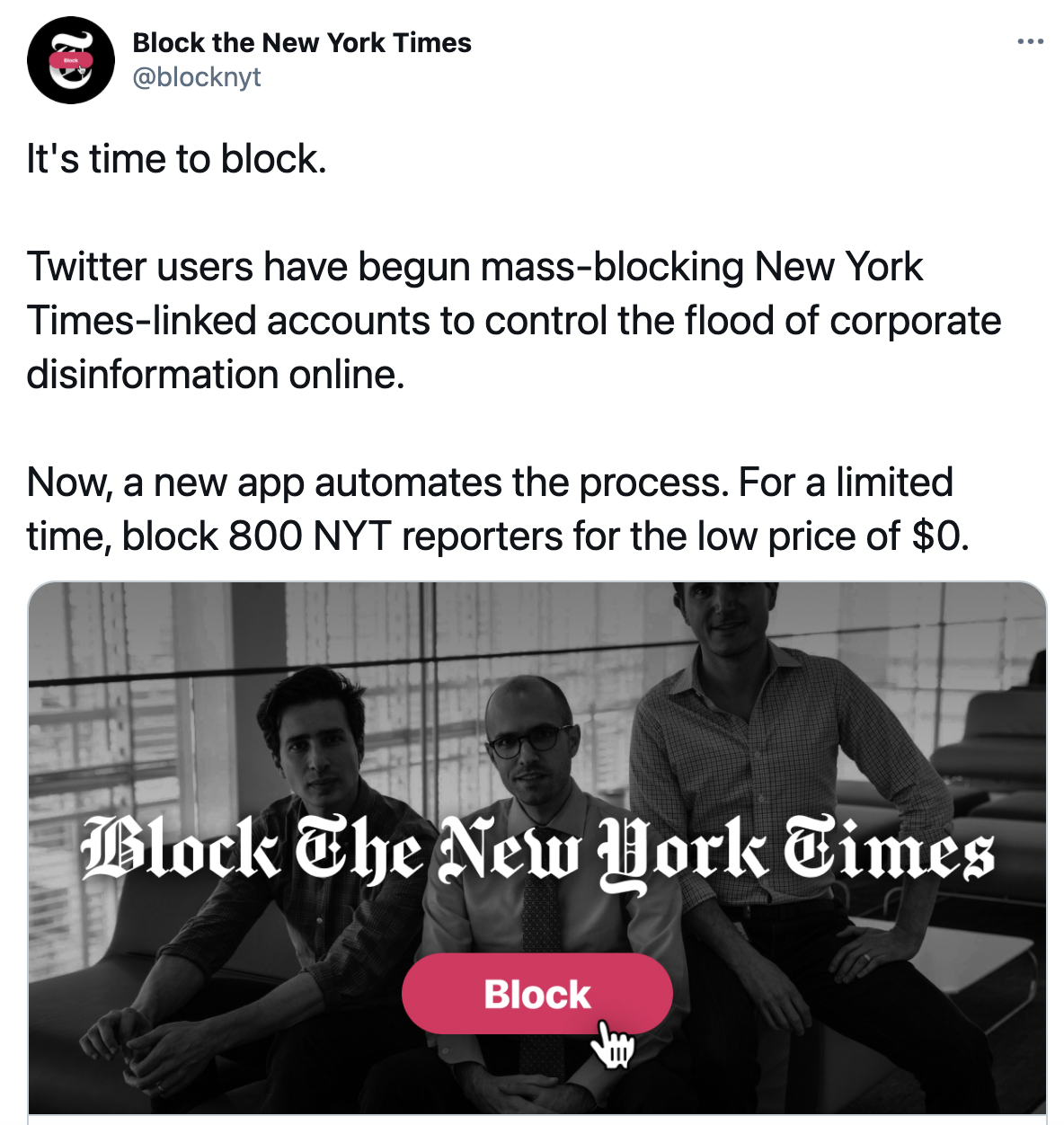 People using online platforms and services are usually on the receiving end of blacklists, but now this app’s users can control “the flood of corporate disinformation online,” while its makers invite them to block as many as 800 NYT reporters for $0. A bargain, one Twitter commenter remarked.

In the spirit of the best of memes, the operation is tongue-in-cheek while also highlighting some very serious issues, like professional legitimacy and trustworthiness of mainstream, corporate media.

NYT is clearly chosen here not as “the paper of record” but something more like “the flagship” of what critics say is a declining, if not a dying industry. Nevertheless, it’s still an industry vigorously dedicated to exerting pressure on social media to censor “more and better,” pushing them with hundreds of articles and reports published over the past years to police speech, deplatform, label – and of course, to block.

Now those who want to block NYT can learn more about why the app is needed if they click through from the Twitter post to the “Block the New York Times” page.

It features a damning collection of many of the things that have gone wrong at, and with the newspaper. They all result in a reputational and financial crisis, the app’s creators suggest – things like pushing dissenting employees out amid a toxic work environment, trying to dox bloggers, incorrectly accusing public figures of using slurs, and what one might describe as “a long battle with (real) fact checking” – and even proper spelling.

But while Twitter users welcomed the app enthusiastically in the comments – requesting similar solutions for some of their other “favorite” corporate media accounts, like CNN and the Washington Post – others noticed that in order to read more about any of the stories documenting NYT’s fall from grace published on the app’s landing page, they had to allow access to their Twitter accounts.

“Twitter’s API makes us ask for all these permissions. All the app does is block these accounts: blocknyt.com/list.csv. You can uninstall the app right after using it. The accounts will stay blocked!,” those behind the “Block the New York Times” replied, referring to NYT-linked accounts.