Stock says the statement has effectively "ended" her career.
Share 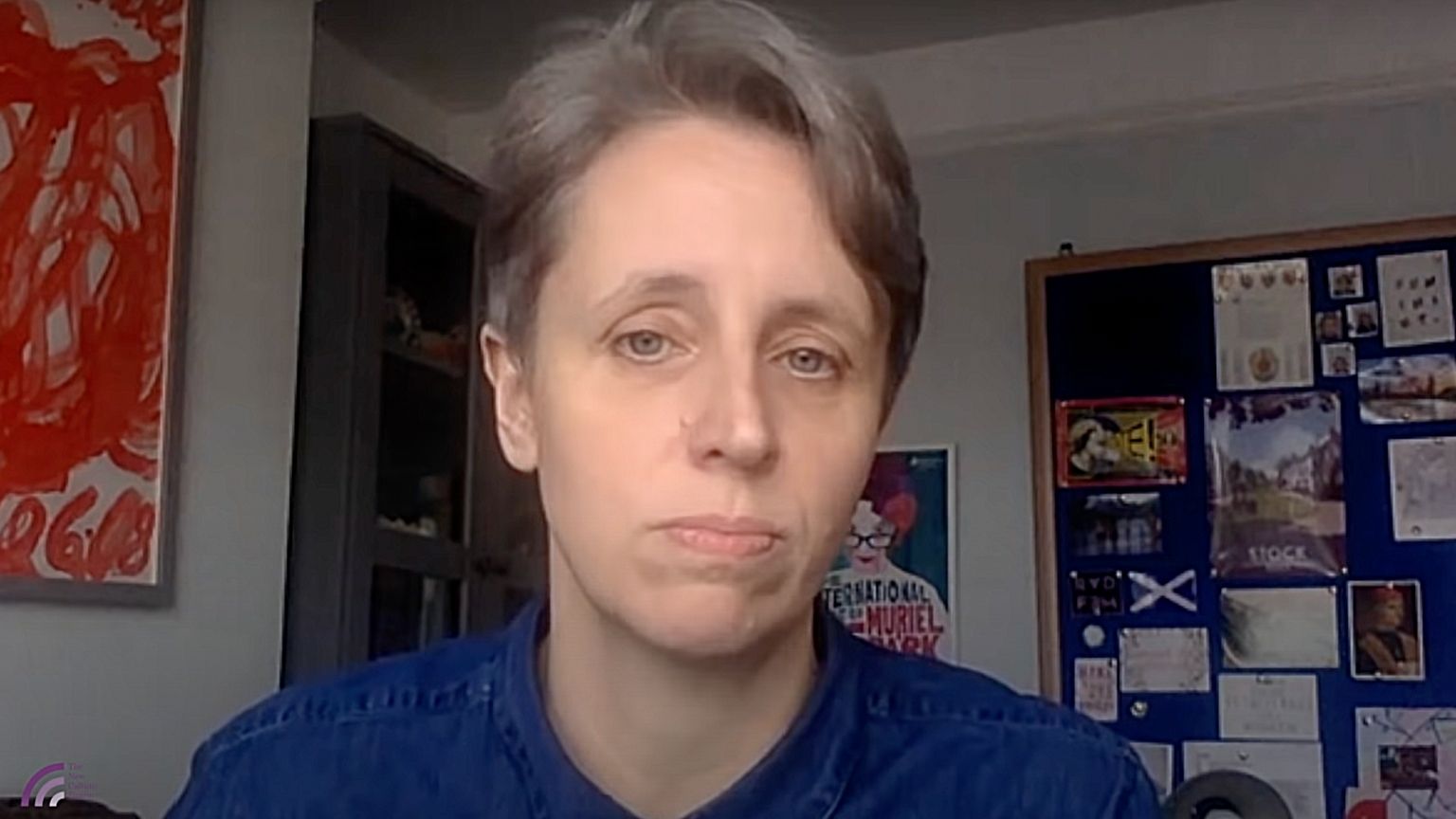 A professor at the University of Sussex, who has been championing the position of women in the trans debate, claims her union has effectively “ended her career” after it released a statement in support of the transgender activists trying to cancel her. The professor has been targeted for weeks for her position, to an extent the police have advised her to stay at home and not go to campus.

In recent weeks, critics of philosophy lecturer Kathleen Stock have held demonstrations at the school with banners saying “Stock Out.” Many more have criticized her on Twitter, calling on the university to fire her using the hashtag #ShameOnSussexUni.

The controversy deepened further following a statement from the Sussex UCU, a lecturers union, in support of the activists.

Stock tweeted a screenshot of the statement, which was emailed to all members, saying , “My former union branch @sussexucu has just effectively ended my career at Sussex University.” 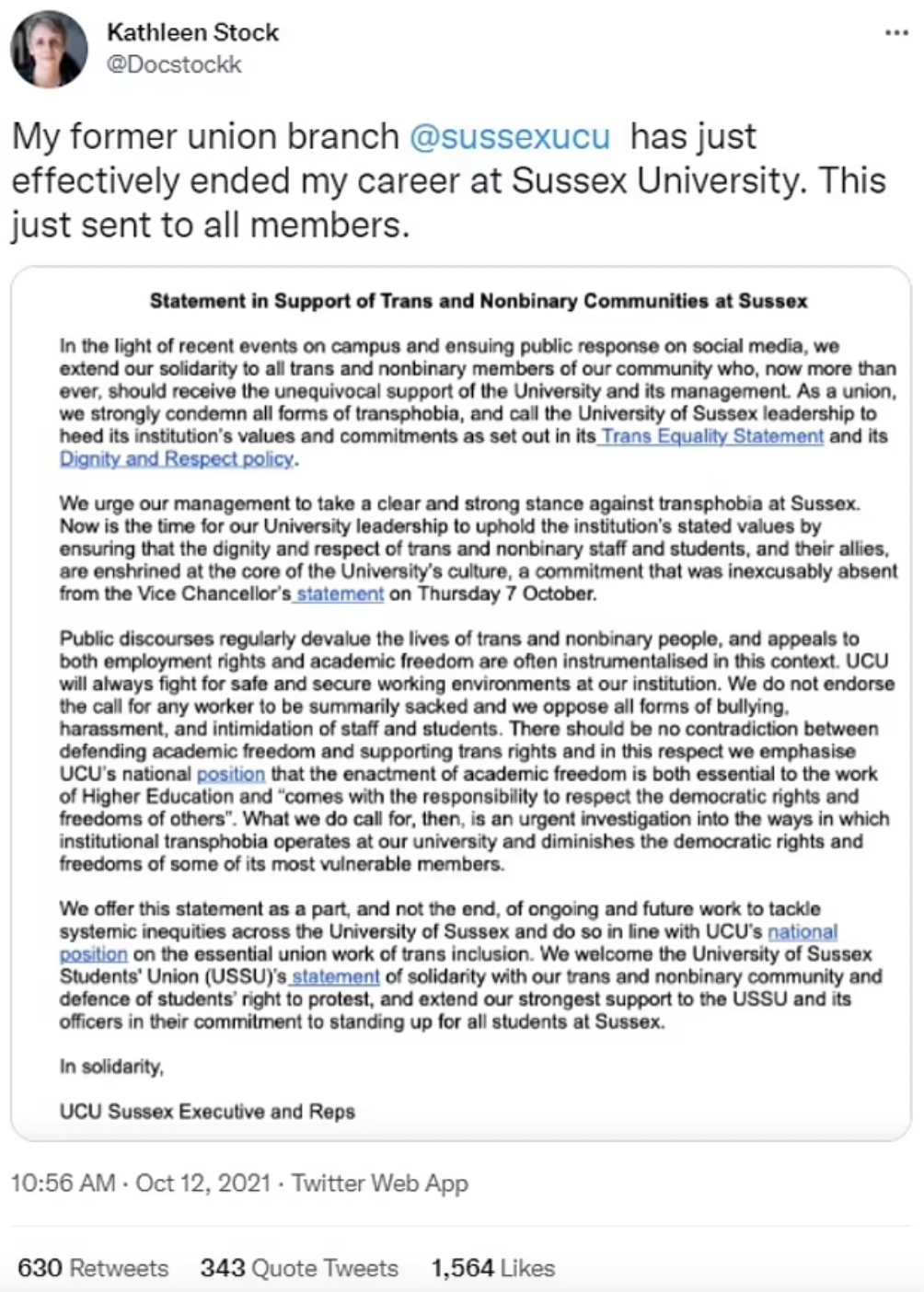 The “Statement in Support of Trans and Nonbinary Communities at Sussex,” read:

“We extend our solidarity to all trans and nonbinary members of our community who, now more than ever, should receive the unequivocal support of the University and its management.”

The statement added: “As a union, we strongly condemn all forms of transphobia, and call the University of Sussex leadership to heed its institution’s values and commitments as set out in its Trans Equality Statement and its Dignity and Respect policy.

“We urge our management to take a clear and strong stance against transphobia at Sussex.”

Stock’s book “Material Girls: Why Reality Matters for Feminism,” released earlier this year, might have placed her in the crosshairs of trans activists.

In a statement to the Daily Mail earlier this year, Stock said: “From placing trans women – some of them sex offenders – in female prisons, to the rise of ‘gender-neutral’ toilets and changing rooms, to trans women being placed on shortlists for women’s prizes and a rethink of women’s sport, the alterations have been rapid and seismic.

“The Stonewall campaign group has been particularly influential with its simple and powerful message – that trans people are an intensely vulnerable minority and that to help them, we must recognize individuals’ ‘gender identity’, not biological sex, wherever possible.

“Government departments, the judiciary, media organizations, schools and – most significantly for me – universities have embraced this message. I abhor discrimination against trans people but I also believe we should be free to examine the effects of changes, including any costs to women and the rights of gay people, and to the health of children wishing to change gender.

“As a lesbian with teenage children, these topics are close to my heart. As an academic philosopher whose job it is to investigate truth, they are even closer. I believe we should be free to discuss these things in public.”

Speaking to BBC Radio 4, the Sussex University vice chancellor Adam Tickell said that university staff had “an untrammeled right to say and believe what they think.”

“I have to say I am really concerned that we have masked protesters, putting up posters, calling for the sacking of somebody for exercising her rights to articulate her views, and it is a matter of real concern,” he added. He said that there was an investigation underway, and students found to be organizing the protests will be punished in accordance with the university’s rules.

“I think we have to be really careful in universities and in society in general to ensure that we do everything to make sure that where we have very, very complicated and different views that we find the space to allow people to articulate those views,” he added.

“I think what we have to do is we have to listen to people. We have very strong policies both on freedom of speech and on inclusion. And I think the trouble we’ve got is that people aren’t prepared to stop and think and listen, rather than to just shout.”