The Recording Industry Association of America (RIAA) has asked GitHub to remove the source code and download options of a small program known as YouTube-dl, (including its forks) and the Microsoft-owned company has complied.

The command-line program can be used to download video or audio from a variety of online sources – copyright-protected or otherwise – to local storage. This and similar programs also feature in the backend of ripping websites, that circumvent attempts to block access and download of content, put in place by entertainment and tech industry corporations.

Although RIAA claims that “the clear purpose” of YouTube-dl is to, essentially, facilitate this form of pirating by allowing what’s termed as unauthorized streaming, as well reproduction and distribution of copyrighted material, the case is much more complex than that.

Should the mere fact that a piece of software can do something illegal mean that it must be stomped out of existence? The same dilemma was and continues to be present around the BitTorrent protocol. It comes down to whether, for example, (actual) forks should be banned because somebody could stab you with one?

YouTube-dl (still) shows up as a legitimate program in repositories of Linux distributions, and users of this operating system can install it and use it from there. And the project can and probably will find a new home after getting kicked off GitHub.

Parker Higgins of the Freedom of the Press Foundation noted that the RIAA did not accuse YouTube-dl source code of infringing – the accusation is, clearly, that this software could be used to violate copyright.

“As anyone who has used youtube-dl knows, it is an extremely powerful and useful tool for format-shifting. It’s super popular among archivists and has incredibly broad fair use applications. The RIAA stance here is pretty aggressive and out there,” Higgins said.

In a tweet, the EFF called YouTube-dl a legitimate tool “with a world of a lawful uses,” and expressed disappointment at its removal from GitHub, calling RIAA’s request counterproductive. 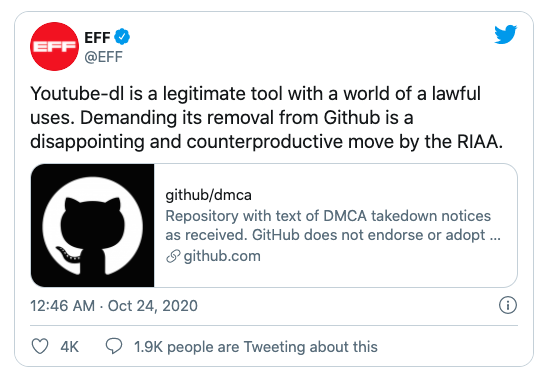 In this case, the question is also how far YouTube/RIAA will go – are downloading tools like wget and curl, or even browsers next?

Then there’s the question of why YouTube, owned by a trillion-dollar company, finds it easier to try to obliterate small software projects that have legitimate and legal uses, than to build better, harder to bypass copyright protections.