Free speech for me but not for thee.
Share

Sacha Baron Cohen only recently got a taste of that when a post of his about Covid got blocked – shortly after he urged Facebook to step up censorship of posts about Covid.

As it turns out, (dis)information is a hard problem to solve, but it&rsquor;s equally easy for some to assume the role of judge and jury on what is true and false in this ongoing and baffling epidemic.

Cohen&rsquor;s post was blocked because it was accompanied by a picture that he said contained false information. The picture showed a person wearing a face mask reading, “Covid-19 is a hoax”; while the article the comedian was trying to link to was him expressing his terrifying fear that democracy might not survive. 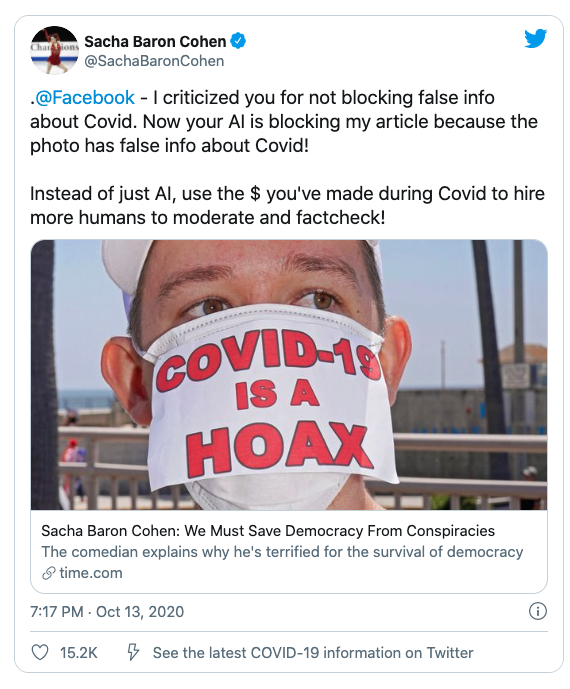 (Many may agree that democracy&rsquor;s at risk, but not on what the cause of its demise might be: online misinformation, rampant censorship, or Covid-induced erosion of civil liberties.)

None of these points interests Cohen, however, and he somewhat disappointingly also failed to see the humor in Facebook censoring him just as he asked for more censorship, and then got upset about it. Instead, he&rsquor;s staying the course, and now wants more refined censorship that relies less on automated algorithmic flagging, and more on human censors who would, goes without saying, agree with him and block different opinions.

The passion for fighting social networks on Covid is a new one the comedian has discovered this year; last fall, he delivered a speech at an Anti Defamation League conference, severely critical of the likes of Google and Facebook, accusing them of allowing (hate) speech on their platforms that can influence voters, and, managed to work in a mention of Hitler into his address.

Cohen at the time wanted this social media and tech problem to be solved by government regulation, and, of course, even more censorship. But like many celebrities and other public figures before and since him, what he means by regulation is censoring and editorializing content, rather than any meaningful look into the anti-competition business models and unchecked personal data harvesting that are the real problem and the true source of power for these companies.