In September, YouTube stared truncating numbers representing subscriber counts to only three leading digits. The abbreviated numbers are now appearing everywhere except in the creator studio, visible to creators only.

It means that it&rsquor;s impossible to know real subscriber numbers for other channels on the video giant.

One service affected by this API change is third-party Social Blade, that tracks statistics and analytics from social media and is popular with YouTubers, but also creators on Twitch, Instagram and Twitter, allowing them to see their ranking on these platforms.

However, YouTube&rsquor;s changes in the way subscriber counts are displayed broke some of the functionality of Social Blade, who have been working to provide a fix.

The company this weekend announced a workaround in the shape of a Chrome extension update allowing creators to have YouTube Studio real-time subscriber counts. 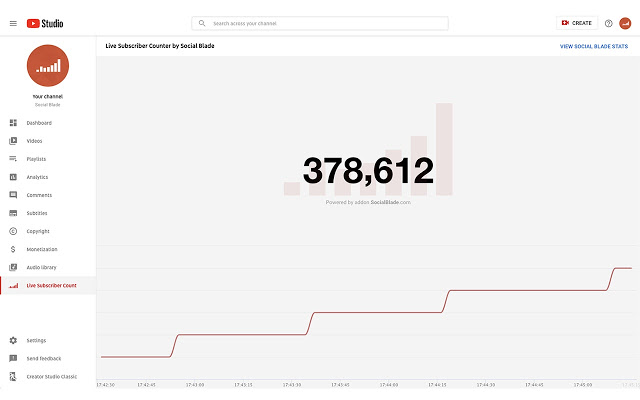 “Hopefully someday data will be public again, but this is at least a start & still follows YouTube&rsquor;s rules,” Social Blade said.

Explaining in detail what were at the time the coming changes on YouTube and in their app, Social Blade announced what they were doing to work with the changes in September.

One of the effects creators were warned about was that as YouTube switches to abbreviated subscriber counts, they would see a significant decrease in the number of subscribers, where, as one example, 111,155,817 would change to 111,000,000. These subscribers are still there, but nobody except the creator knows it – as YouTube is no longer showing the actual number on the public-facing pages.

But what got broken with the video giant&rsquor;s change as far as Social Blade was concerned – until the Chrome extension fix was released recently – was the live subscriber counter. Except for channels with under 1,000 subscribers, the information the real-time counter now showed was no longer useful for its intended purpose of allowing creators to know instantly that their subscriber numbers changed.

YouTube decided to go ahead and imposed these changes, as the blog post notes, onto the creator community that made it clear it was “overwhelmingly” opposed. Social Blade said at the time that they would be adopting their service to the new situation and that, since the changes affect everyone on YouTube, channel statistics would continue to be comparable.

YouTube&rsquor;s explanation for the move was the giant&rsquor;s apparent desire “to take the pressure off of creators.”