Jack Dorsey’s Square holds up to 30% of businesses’ income, blocks them on Twitter when they complain

Businesses risk going out of business because of Square's actions. Many can no longer pay salaries.
Share

Square&rsquor;s digital payment platform is accused of withholding a significant chunk of money from some of the businesses that use its services. Square says it&rsquor;s to protect customers. Businesses, however, disagree with this retention policy of up to 30% for four months – especially at a time when many small businesses are at risk from going under.

Various companies have started to complain that the Square mobile and digital payment platform has recently been withholding between 20% and 30% of their income, depriving them of the ability to pay for salaries and supplies.

Some of the affected business owners have expressed concern about these retention rates, which have affected them much more than the economic recession caused by COVID-19 lockdowns.

Jesse Larsen, the owner of PennyWise Contracting, said Square&rsquor;s greed will end his business. Another affected owner was Sean Weber of Legal Knock, who has lost about $4,000 due to the retention, and he said that nothing like this has happened before in the two years that he has been using the service.

Nikol de Riso, the owner of EGA Solutions said she could not get a response from Square for two weeks about the money it had held from her business, which provides various legal and practical services for small businesses. When she finally got someone on the phone, she said she was told that the withholding was a general policy and not a result of any risks in her business.

The number of complaints posted on Twitter is staggering and Square is responding by blocking users. This is a curious decision, considering that Square&rsquor;s CEO is the same as Twitter&rsquor;s, Jack Dorsey. 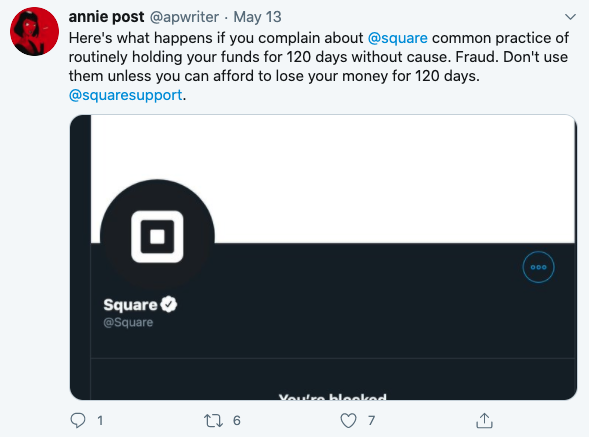 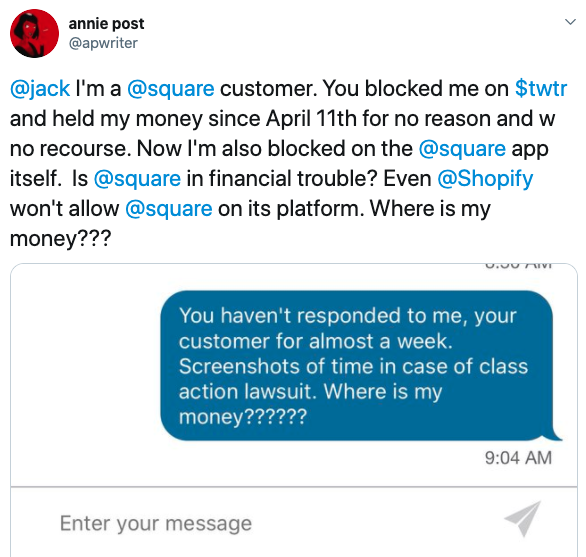 Even though many are requesting that Square eliminate this unfair retention policy, it does not appear that the payment service has plans to modify its actions. According to them, such high retentions have only been applied to 0.3% of all platform users.

In this way, Square ensures that they can return the money to consumers. However, some of the affected businesses have demonstrated that they do not meet the criteria to be considered “risky”, so the choice seems an arbitrary measure.

It should be noted that Square also charges a commission of between 2% and 4% on each of the transactions, even if the withholding is applied. Some users, who say that in these difficult times the platform should offer more facilities for business, have dismissed the strategy as nonsense as other payment processors they use don&rsquor;t do the same.