Crowder says when testing YouTube search for Tulsi Gabbard via a VPN while she was a number one trending story, her channel was at the top of search for locations outside of the US but nowhere to be seen in the US.
Share

Comedian and political commentator Steven Crowder appears to have uncovered evidence of YouTube suppressing the profile of US presidential candidate Tulsi Gabbard.

Crowder says he made the discovery a day after 2016 US presidential candidate Hillary Clinton suggested that Gabbard was being propped up by the Russians. Gabbard’s response to Clinton on Friday (October 18) quickly went viral, propelled her to the number one trend on Twitter, and generated lots of media coverage.

Great! Thank you @HillaryClinton. You, the queen of warmongers, embodiment of corruption, and personification of the rot that has sickened the Democratic Party for so long, have finally come out from behind the curtain. From the day I announced my candidacy, there has been a …

Crowder goes on to say that by Sunday (October 20), after the media attention generated by Gabbard’s response to Clinton had died down, YouTube switched the results back so that searches for “Tulsi Gabbard” from within the US and Spain were identical.

In addition to showing evidence of what appears to be Tulsi Gabbard’s YouTube channel being suppressed in the US during a presidential campaign, Crowder argues that this is not algorithmic and points to how YouTube staff seemed to flip a switch when censoring and then reversing the censorship of his channel in YouTube search. The censorship of Tulsi Gabbard’s profile is similar to the form of censorship that has affected Crowder himself as well as other conservative commentators on YouTube. 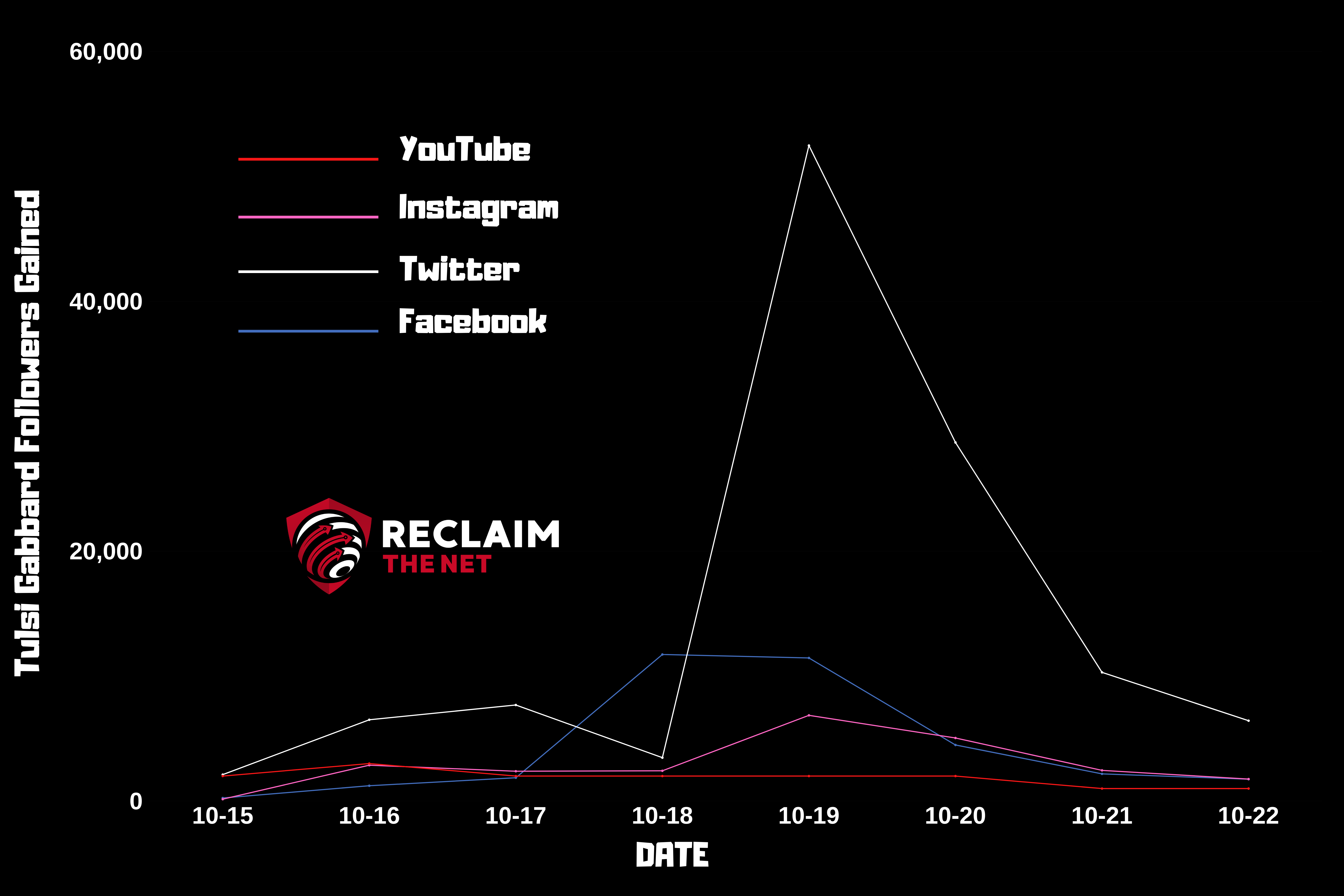 Gabbard’s social media follower growth during this period of heightened media attention shows that on YouTube her daily follower gain was relatively flat. By contrast, her Facebook, Instagram, and Twitter profiles gained significantly more followers than average on and around October 18. This could be the result of YouTube hiding Gabbard’s profile from search during this period.

Crowder’s release of this evidence comes a few months after Gabbard sued Google for election interference after a very similar incident. The incident that sparked this lawsuit involves Gabbard having her search ads account suspended while she was the most searched for Democratic presidential candidate after a debate.