After half a year of harassment, Twitch streamer Sweet Anita says that her stalker has been detained by authorities and has been issued a restraining order prohibiting him from approaching the streamer’s town of residence.

Anita revealed that the stalker spent hours in front of her house waiting for her to come out, and even went as far as to sleep behind her house one night to gain the opportunity to assault her.

This first assault ended with the intervention of the police. The young man was armed with a knife, confessed to being guilty of the harassment charges, and Sweet Anita and a friend even provided evidence of the young man’s multiple crimes, but the police decided to release him with a warning.

With this disappointment, Sweet Anita said on Twitter that she was already used to the lack of protection by the police. Also, she revealed that the stalker had moved to be near her residence, so she would see him in her neighborhood every day. 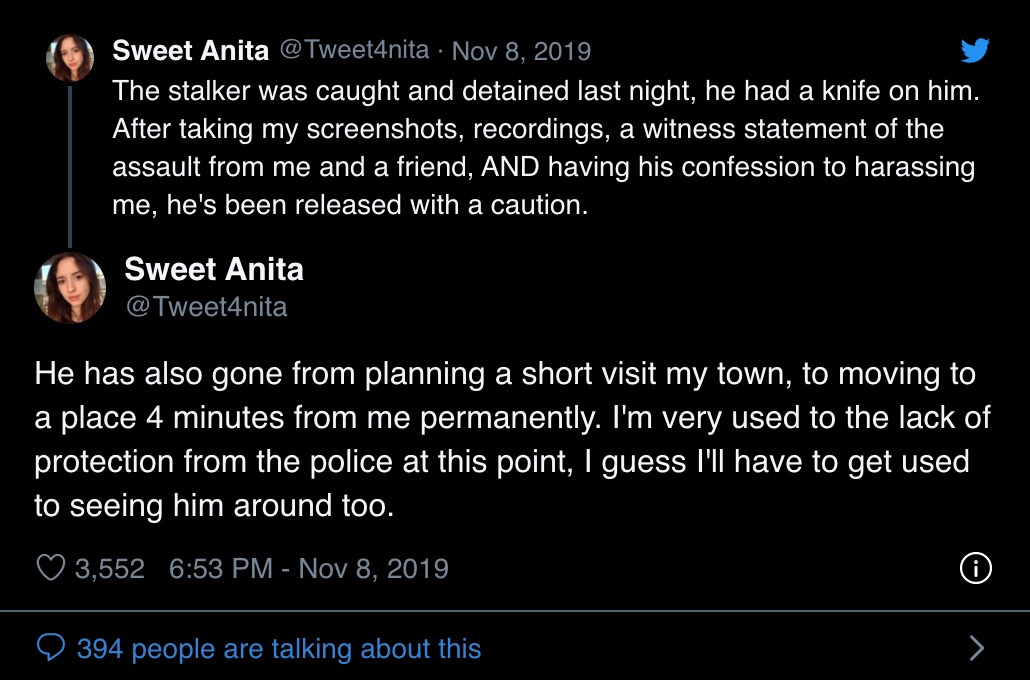 Although Sweet Anita didn’t constantly talk about how the stalker situation continued, she has finally announced that her stalker was arrested and that he received a restraining order.

During a broadcast on April 7, the streamer reported that the stalker again tried to assault her, but this time local shopkeepers intervened.

Sweet Anita says that the stalker again waited for her outside her home, and began to follow her when she was going to do some shopping.

Sweet Anita confronted the stalker asking him to leave her, but he did not respond. When she left the store, the stalker started chasing her again, but a couple of workers came out to apprehend him and blocked the door for him not to follow her.

Despite this, the stalker finally made it to Sweet Anita’s house waiting for her return, so the streamer decided to call the police.

She said she didn’t have much faith because of what happened in the past, however, this time the police did press charges of harassment thanks to the statements of the witnesses.

As a result, the authorities forced the stalker to leave the town and barred him from entering it again.