The teacher was caught only because the mother was able to record the interaction.

During lockdowns, teachers have repeatedly been worried that virtual learning will now provide a way for parents to see what, and how, their kids are being taught.

A middle-school teacher in Tacoma has gone on a rant about President Trump to sixth-grade students during an online learning session after one of them said Trump was his role model. The student was temporarily kicked out of the class. The student’s mother is worried that her son was punished for expressing a valid opinion and that the school isn’t respecting free speech.

On October 2, during a virtual class, Brendan Stanton, a teacher at P.G Keithley Middle School, asked sixth-graders who their role models were.

Stanton asks students a daily question, which they are required to answer in an online chatroom. Last Friday, Stanton asked, “Who is the one person you admire and why?”

The student, whose name is withheld for privacy reasons, answered:

“I admire Donald J. Trump because he is making America great again. And because he is the best president the United States of America could ever, ever have. And he built the wall so terrorists couldn’t come into the U. S. Trump is the best person in the world. And that’s why I had admire him.”

That answer triggered a response from the teacher. He called out the student for mentioning Trump, attacked the president, deleted the chat, and kicked the student from the class.

The student reported the incident to his mother, Elsy Kusander, who came to see what was happening, just as the teacher was ranting about the president. She recorded the incident on her phone.

“The example that was shared in the chat, which I went ahead and erased for us, was not appropriate, right? Especially as that individual has created so much division and hatred between people and specifically spoken hatred to many different individuals, ok?” Stanton told the students in the virtual class.

Kusander was surprised at the teacher’s remarks.

“I went into my son’s room, and I heard the teacher saying that this individual is hateful and divisive, etc. I started to record,” Kusander said in an interview in the Jason Rantz Show on KTTH.

“How can a teacher be teaching to his students horrible things about the president of the country without facts?” she added.

Kusander called the teacher later that day to discuss the incident. Stanton tried to mislead the teacher about what happened by saying the question was about a computer science expert students admired. The teacher obviously thought he could get away with the lie since he had deleted that portion of the virtual class.

The teacher explained that he deleted the conversation because another student was offended by the answer. He insisted that it had nothing to do with his political perspective.

“I do try to keep politics out of the classroom… because students have different opinions, right?” he said. “And so if the way that I said it was not perfect, I do apologize. What I was trying to say is just ‘Hey, hey, guys, let’s get it back to our topic of the day because we really need to get moving into our content, which was on our computer scientists.’”

But Stanton did push a political position when he said, “But we know that our neighbors at the southern border are not all terrorists, right?”

When Kusander told him he recorded the incident, Stanton came clean.

“I do apologize if my words were not perfect at the time. If I used… if I said that Trump was ‘hateful and divisive,’ that may have been what I used at the time, but my purpose was in bringing us back to the conversation of computer scientists and the positive role that they’ve played in our history,” Stanton explained to the parent.

He even offered to apologize to the student.

“I totally respect him as an individual. And his opinion. I am always interested in student feedback and also parent feedback as well. So, I appreciate you having this conversation with me,” Stanton said. 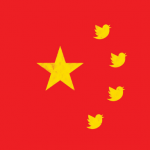 Twitter doesn’t hold Chinese officials to the same standard as those in the West.

Twitter doesn’t hold Chinese officials to the same standard as those in the West.

More restrictions on the comments section.