The Lincoln Project posted screenshots of personal DMs between its employee and a journalist without the consent of either party. Twitter claims that the posting of the DMs did not violate its policies on hacked material, leading critics to highlight that Twitter’s policy on “hacked materials” seems to be rather fluid and arbitrarily enforced.

The Lincoln Project is a political action committee formed in late 2019 by former and present Republicans and has been the subject of controversy – most recently since it emerged that its co-founder, John Weaver, was accused of sexually harassing younger men and boys as young as 14 years old. The FBI has since launched an investigation into Weaver.

Jennifer Horn, a former partner who resigned from the organization last week, said that the leadership knew about Weaver’s behavior months before it became a scandal.

In an attempt to discredit her, the organization posted screenshots of direct messages between Horn and a reporter at The 19th, Amanda Becker.

Horn later tweeted that she did not give consent for the DMs to be posted, tagging both Twitter and its CEO Jack Dorsey.
The co-founder of The 19th, Emily Ramshaw tweeted, “We’re not going to be bullied or intimidated out of pursuing critical journalism.”

Though The Lincoln Project deleted all the screenshots, it is not clear why Twitter did not take any action considering its policies prohibit the posting of hacked material.

In fact, Twitter actively told journalist Yashar Ali that the posting of the private messages that were obtained without consent for either party did not go against its hacked materials policy. 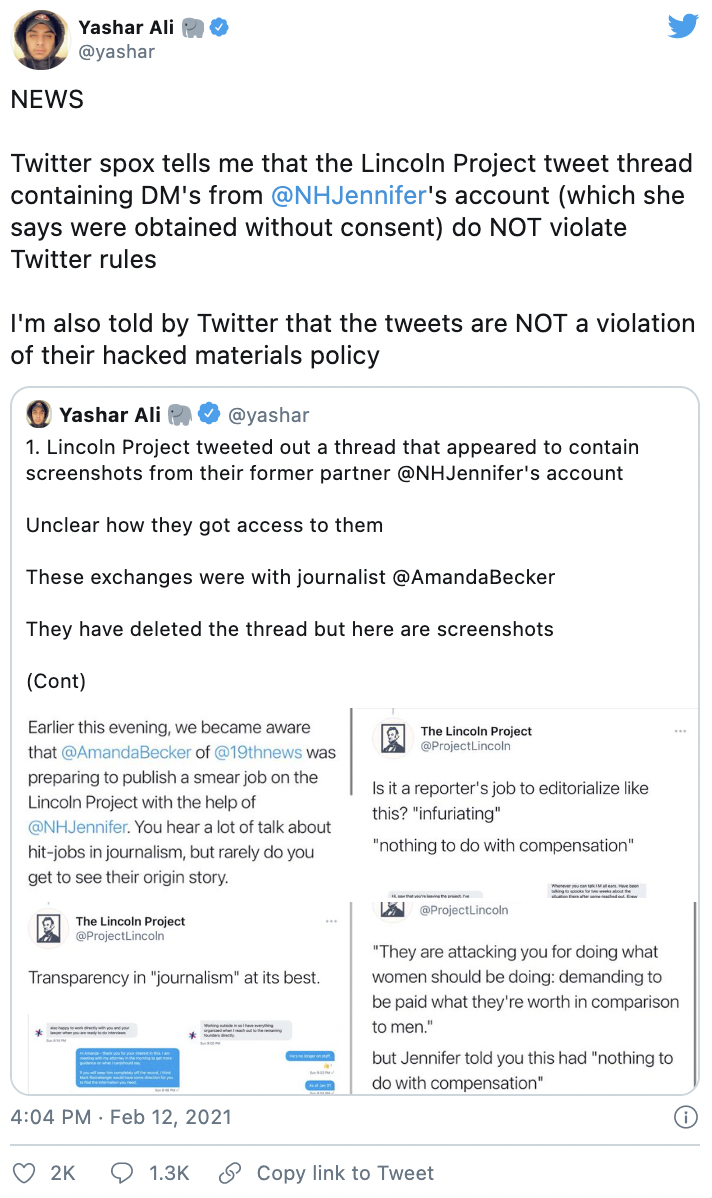 Critics pointed out the platform’s double standards. Twitter tried to suppress the Hunter Biden story by the New York Post last October, citing its “hacked materials” policy, even though the information was legally obtained and not hacked.

“Twitter&rsquor;s current policy is that the New York Post is not allowed to report on e-mails from the president&rsquor;s corrupt, drug-addled son, but Lincoln Project pedo promoters can hack and post direct messages,” said Sean Davis of The Federalist. “All animals are equal, but some animals are more equal than others,” quoting George Orwell’s Animal Farm.

At the time, Twitter claimed that it was limiting the distribution of the Hunter Biden story because of its policies against “attempts to compromise or infiltrate computer systems for malicious purposes.”

However, the leaked emails were obtained legally. The computer was abandoned at a repair shop, and since the bill was not paid the owner of the shop had every right to assume ownership.

Regardless of the fact that no law was broken, Twitter suspended the accounts of several conservative figures who shared the story including former White House Press Secretary Kayleigh McEnany.

In the case of Weaver, the sexual harassment and subsequent violation of Horn’s privacy took place on Twitter. Yet the microblogging platform insists that it investigated the issue and concluded that no policies were violated.

Weaver himself admitted to the accusations of sending inappropriate messages and apologized.

“To the men I made uncomfortable through my messages that I viewed as consensual mutual conversations at the time: I am truly sorry. They were inappropriate and it was because of my failings that this discomfort was brought on you,” Weaver said last month after resigning from the policy advisory organization.