This is the third time since February Trump has had his videos blocked on Twitter as the result of copyright claims.
Share 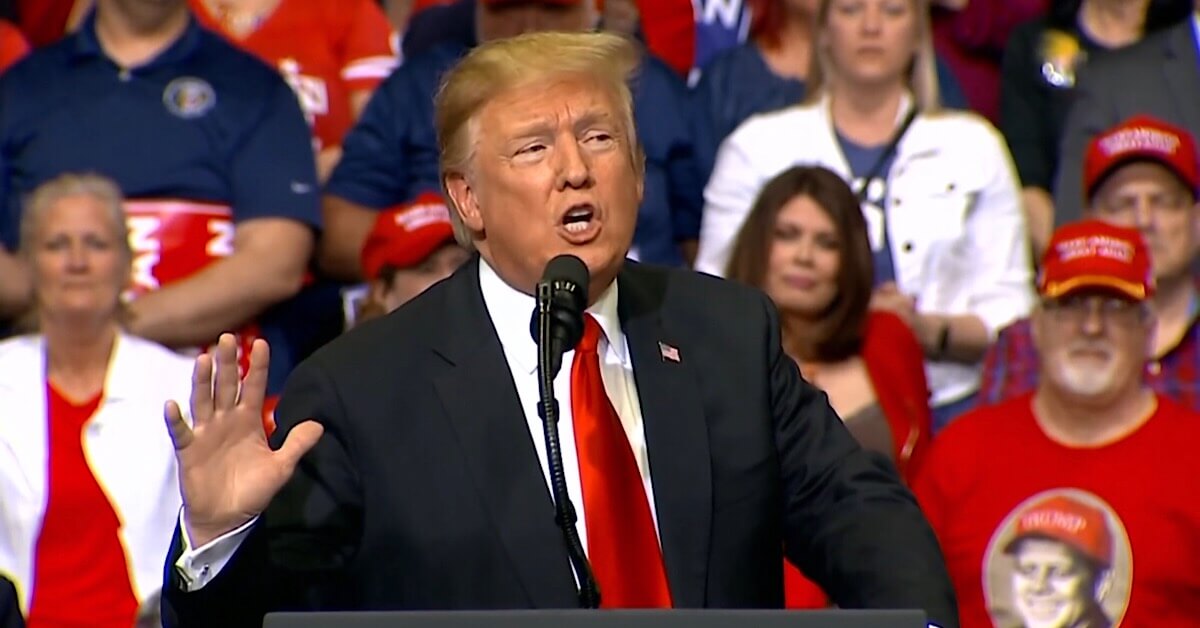 Twitter is censoring President Trump yet again. Less than two months ago, a hilarious meme video that he shared on Twitter was blocked as the result of a bogus copyright claim. Now he’s had another video disabled on Twitter for copyright infringement.

The most recent video (reupload link) that was blocked on Twitter featured a number of Trump critics and some of his works as President along with the message “First they ignore you. Then they laugh at you. Then they call you racist.” The video finished with the message “Your vote proved them all wrong” and showed the text “2020.” The video was edited to resemble a movie trailer and used music from The Dark Knight Rises.

Warner Bros. filed a copyright claim against the video because it featured part of the score from The Dark Knight Rises. In a statement published on The Hill, Warner Bros. said:

The use of Warner Bros.’ score from The Dark Knight Rises in the campaign video was unauthorized. We are working through the appropriate legal channels to have it removed.

This is the third time in the last two months that copyright claims have led to Trump having his videos blocked on Twitter. In February, he shared a video titled “The State of the Democratic Party: Hurting” which featured the R.E.M. song “Everybody Hurts.” It was swiftly blocked by Twitter. He then reuploaded the video with a new song – Lee Greenwood’s “God Bless the U.S.A” – but the video was once again removed in response to a report from the copyright holder.

This latest takedown from Warner Bros. is a little different to the previous takedowns because some people are suggesting this is a campaign video whereas the other videos were pro-Trump memes that weren’t created by the Trump campaign.

Memes are generally protected under fair use laws because they are transformative works which means they take the original creative work and transform it into something new.

According to Law Street, political campaign videos aren’t usually protected under these fair use laws and a campaign needs greater legal permissions to use copyrighted music in advertisements:

To use music in advertisements (television and internet), a campaign needs to receive legal permission from both the song’s publisher and the artist’s record label.

Law Street also says that while the campaign doesn’t need to get permission to use music from the artist, an artist can still legally challenge the use of their music in political campaign ads:

Technically, campaigns do not need to receive explicit permission from the artist to use their work, but it should be noted that even if a politician has all the requisite legal permissions the artist can still sue the campaign. The author(s) could make a claim to their “Right of Publicity,” which is a legal protection many states give celebrities and artists. The right of publicity generally protects the use of someone’s name and likeness for commercial reasons. However, this right is not yet nationally recognized. On the federal level, the Lanham Act protects an artist’s trademark or brand by offering protection against false endorsement in which the use of an artist’s work can imply the artist’s support. Politicians and their campaigns also need to acquire proper licensing from the publisher, record label, and venue.

It’s still debatable whether this video is actually a Trump 2020 campaign video. However, when Trump promotes memes or pop culture videos that contain copyrighted music and could be construed as campaign videos, he’s giving his opponents an opportunity to take advantage of these copyright laws and get his videos taken down.

Memes and videos that reference pop culture are incredibly popular and helped to get Trump elected in 2016. Many left-leaning websites admit that conservatives are much better at creating and harnessing the power of memes than left-leaning groups. However, since the left can’t meme, they’re likely to use these provisions in copyright law to censor anything that resembles a Trump campaign meme or pop culture video even more aggressively in the run-up to 2020.

If Trump wants to continue benefiting from meme magic in his 2020 campaign, he and his campaign are going to have to be mindful of left-leaning groups who will take advantage of these copyright laws and make sure they have all the necessary permissions to use copyrighted works in any memes and videos that they share going forward.