What was designed to reduce harassment could be a perfect recipe for the spread of unchallenged fake news and echo chambers.
Share

Twitter is actively testing its new feature that allows users to lock down a conversation and choose who is allowed to reply to a tweet.

Twitter is working on implementing Conversation Controls in the web app pic.twitter.com/DHQfHbxJt1 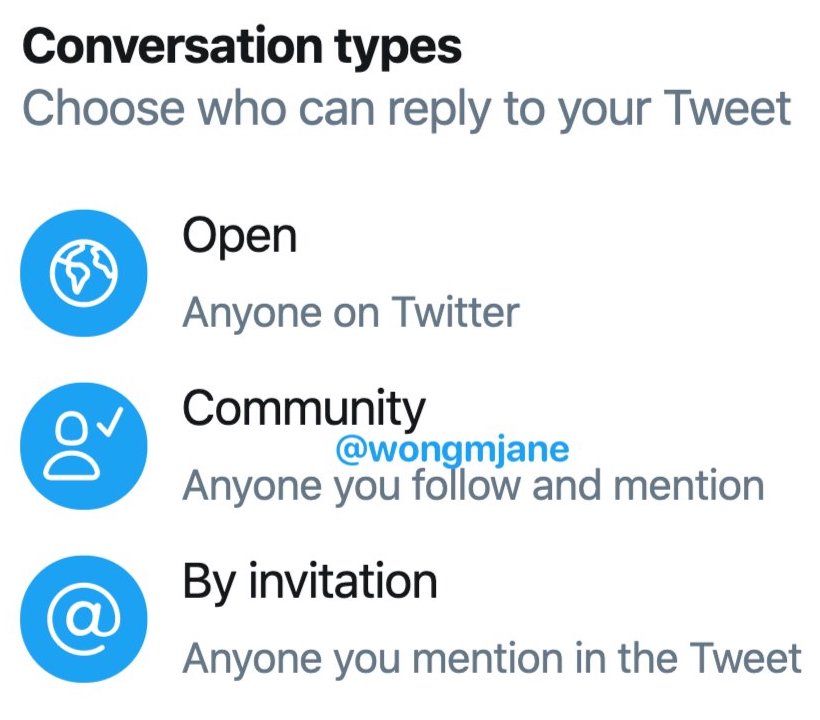 The structure and options of the feature have somewhat changed since they were first announced at CES in January.

The feature is called “Conversation types” and the three options are as follows:

The feature is currently in testing and it’s not yet known if this is how it will finally be rolled out.

While the previous structure is similar to the new options have been found by Wong, there’s one major difference.

The example shown by Wong doesn’t include the “statement” option that was previously announced. This was the option that allowed a user to tweet and prevent anyone from replying.

While the option isn’t made available in the latest apparent version, it could be that by selecting the By Invitation option and then simply not tagging anyone, a user could create a tweet that no one is allowed to respond to.

The conversation has perhaps always been Twitter’s most notable and world-changing feature.

While tweets can still be quote-tweeted without restriction, the replies – that often add more context to an original tweet through a wider conversation – and can give a greater understanding of the tweet and its place within the zeitgeist – will be blocked.

The changes are being tested as Twitter has been looking for ways to reduce the “harassment” on the platform – something that has been seen as a controversial move by those that believe that it will instead further add to the severe echo-chambers that already exist on the platform.

Several fake news articles and statements have been debunked by the ability of the conversation participants to point out problems and inaccuracies with reporting, statements, or opinions in the original tweet – something that could become difficult if fewer people are allowed to participate in a conversation.