Grenell refused to bow to Twitter's demands to delete it.
Share

Twitter, in attempts to silence conversation around vote-by-mail on its platform, has now locked the former acting Director of National Intelligence out of his account.

Upon his friend’s request, Ric Grenell took to Twitter and posted the images of two ballots that were sent to the names of a deceased couple.

Social media platforms, of late, have been extra vigilant about the content that gets posted on their platform. With the current year combining several important and critical events, including the US Presidential Elections and COVID-19 saga, platforms have grown even more stringent with their rules. 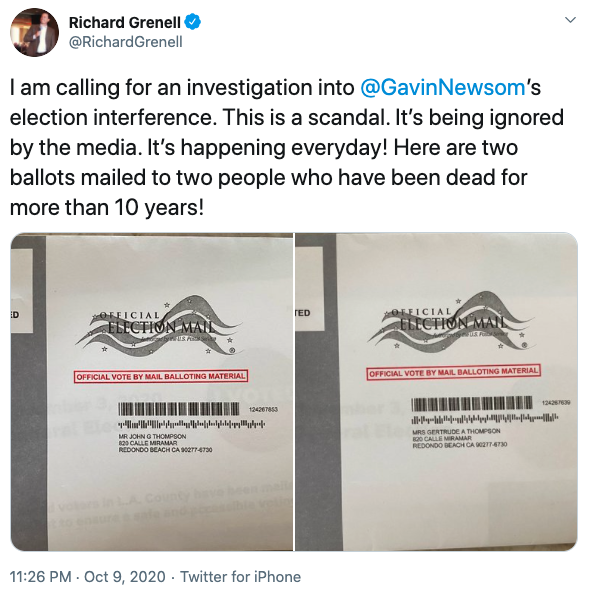 Twitter, in particular, has been censoring tweets related to vote-by-mail for a while now. Users who suggest that mail-in voting is open to corruption or fraud are getting their accounts locked or suspended. Several individuals, including President Donald Trump, have all been censored by the platform for talking about vote-by-mail.

Trump, as a matter of fact, just urged people of North Carolina to mail their ballots early and asked them to check if their vote is being counted at polling stations. Even this was censored by Twitter.

Coming back to the issue, here’s what happened: Tom Thompson, a friend of Grenell’s, received two ballots for both of his parents each, who had passed away several years ago. Aghast by what has just happened and imagining how the election outcome can be jeopardised with such ballots, Thompson asked his friend Grenell to bring the issue to the attention of a wider audience and issue an investigation. 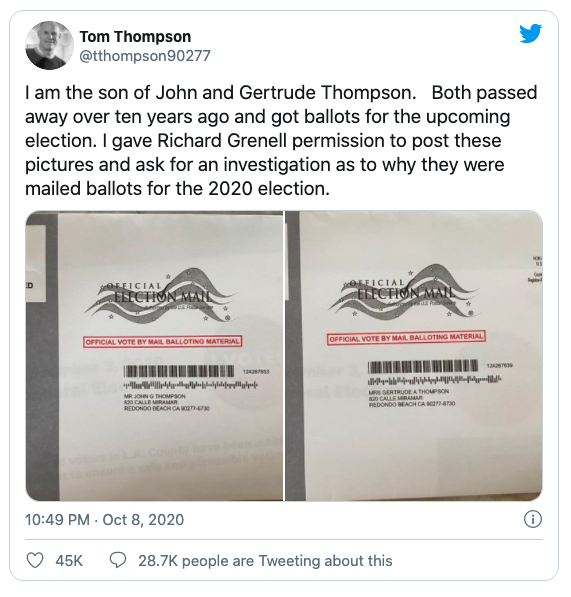 But Twitter did not have any of it. The platform simply censored Grenell’s tweets and told him to delete them to be allowed back on the platform. Grenell, however, wasn’t ready to do so.

“He’s my friend in California, a very close friend of mine. It’s his parents who were sent these ballots, and he gave me the photo, and he gave me permission,” said Grenell.

“I have permission, and they have no right to ask me to do that,” Grenell said in response to Twitter asking him to censor the tweets.

Even his friend posted on Twitter about how he had asked Grenell to discuss the issue.

“I am the son of John and Gertrude Thompson. Both passed away over ten years ago and got ballots for the upcoming election. I gave Richard Grenell permission to post these pictures and ask for an investigation as to why they were mailed ballots for the 2020 election,” wrote the friend Tom Thompson.