Pearson was locked out for 12 hours as a punishment.
Share

Daily Telegraph’s columnist Allison Pearson was locked out of her Twitter account after she shared her views about the COVID-19 that were not exactly coinciding with the government’s narrative about the pandemic.

Of late, governments have urged social media platforms to put “false” news on a tight leash and promote only authentic and government-approved narratives surrounding the pandemic. As a result, arguments that contradict the mainstream accepted narrative, no matter how scientifically accurate, are being censored across the internet.

Pearson, in response to a BBC article discussing the risks of COVID-19 upon reopening universities, said that she wants them to reopen as she believes it would help pave a way for developing herd immunity in people.

“How hard is it for people to understand? We WANT students to get the virus. They will speed us towards community immunity. It may not be very far off,” she tweeted. 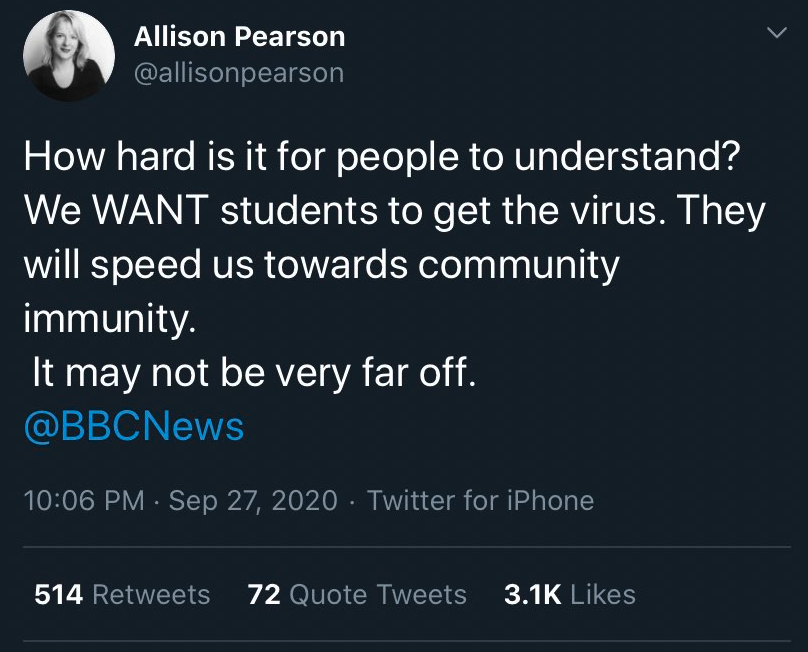 It is worth noting that prominent scientists such as Prof Sunetra Gupta from Oxford and Nobel laureate Prof Michael Levitt also have a similar opinion about herd immunity as Pearson expressed.

“Is it a coincidence that the Twitter algorithms, which put me on the Naughty Step for 12 hours, align so closely with government policy?” asked Pearson, in an interview with the Telegraph.

“Or is it that Lefties get to shut down any version of the truth but their own?”

Since the pandemic, several countries have grown increasingly reliant on social media platforms and are censoring information that doesn’t coincide with their narratives.

The UK government’s Rapid Response Unit identifies “false narratives” online, flags them, and sends them to social media networks in an effort to get such posts down. It goes without saying that social media platforms mostly agree to all such appeals.

“There is an easy clear line between preventing criminal scams and preventing genuine debate by people. Twitter have crossed this, quite possibly aided and abetted by the Government which is in thrall to Imperial College and clearly trying to shut down views from Oxford University related scientists. It is appalling and terrifying, what you expect in North Korea not Whitehall,” said Richard Tice, Brexit Party Chairman, about the UK government’s initiatives such as the Rapid Response Unit.