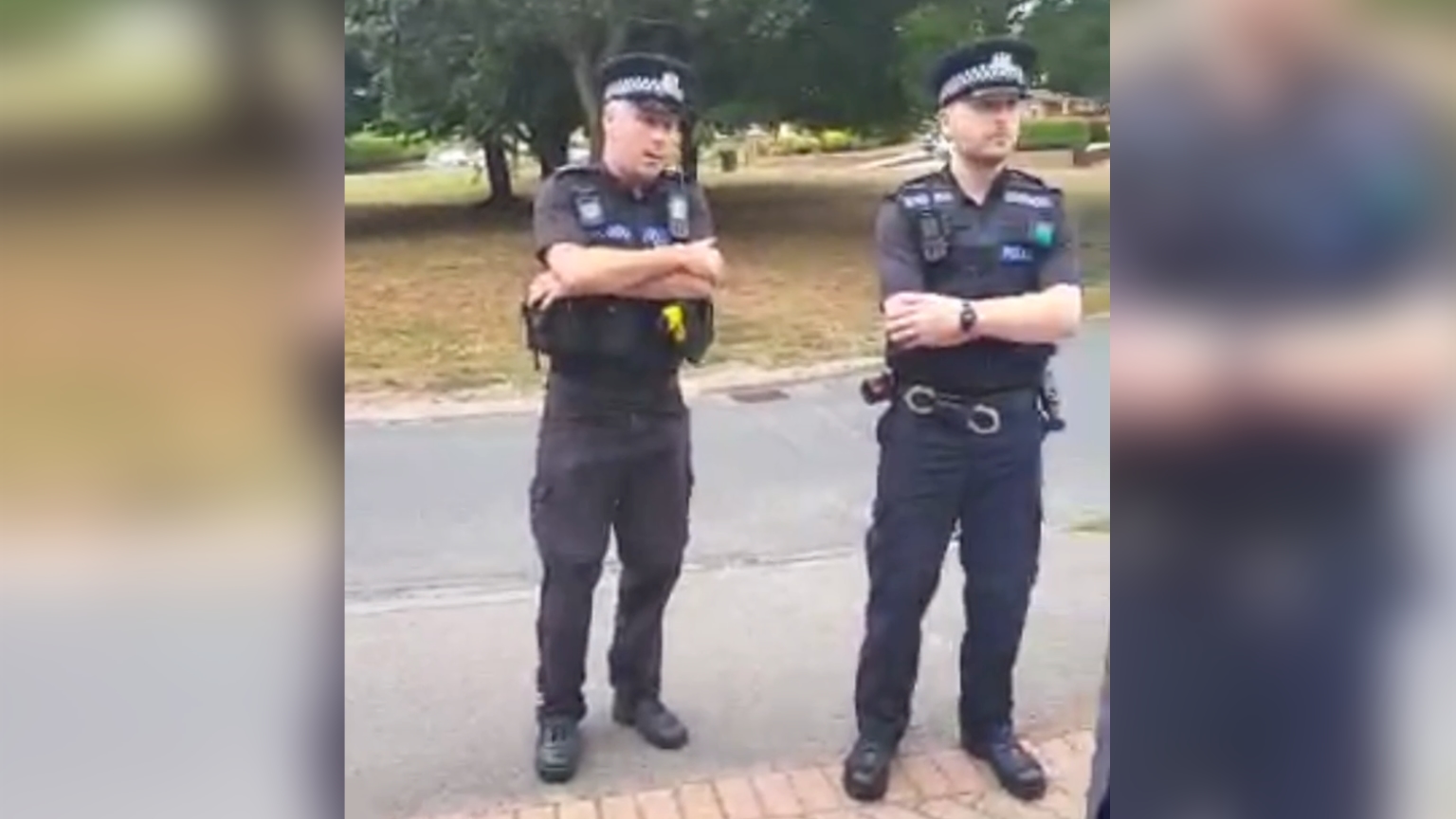 Yesterday, the UK&rsquor;s Hampshire Constabulary sent five police officers to arrest a man in Aldershot for a Facebook post containing an image that made Progress Pride flags (flags that combine the lesbian, gay, bisexual, transgender (LGBT) rainbow pride flag with a chevron containing the blue, pink, and white stripes of the transgender flag) look like a swastika. 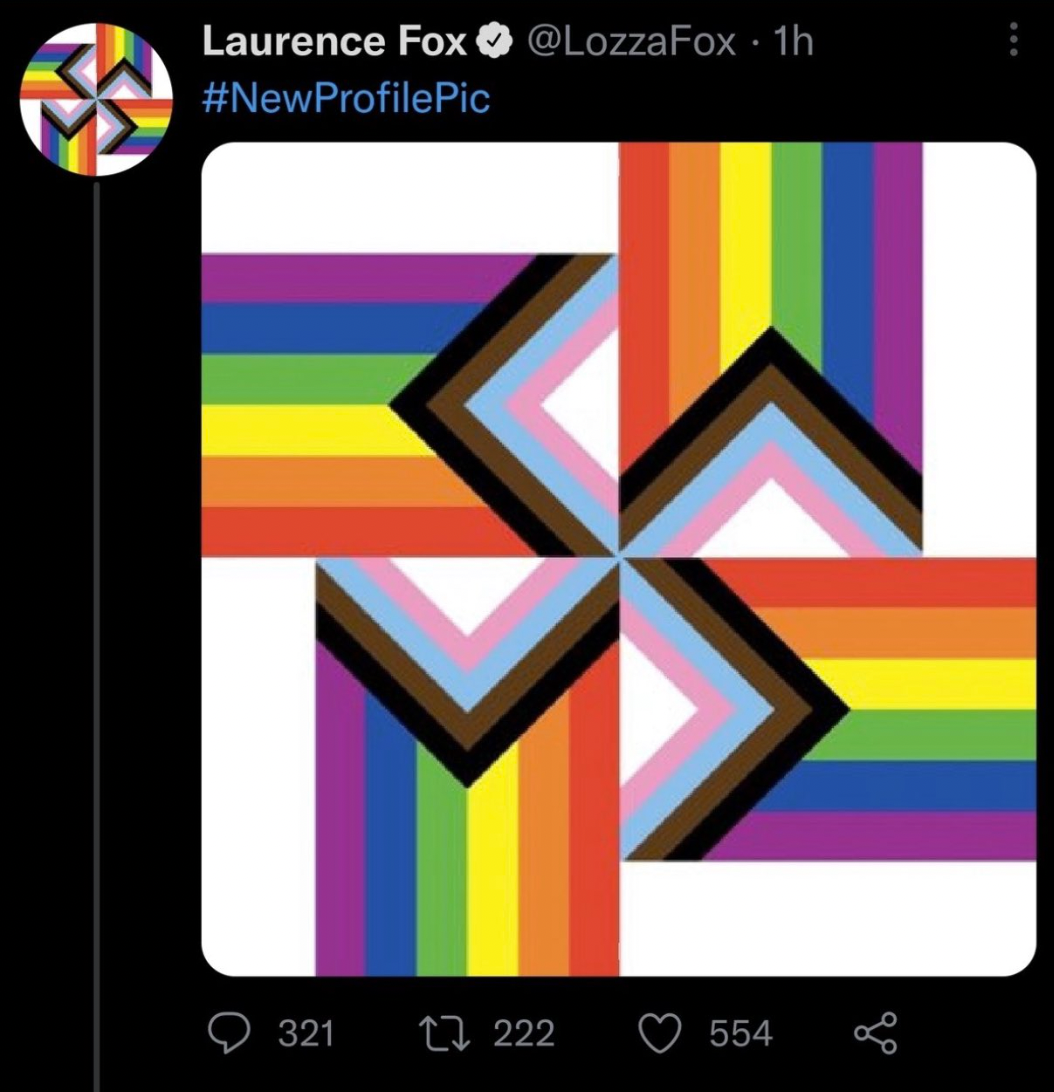 Harry Miller, a former UK police officer and chairman of the UK political party Reclaim, was also arrested for attempting to obstruct the arrest of the man who posted the transgender flag swastika.

The arrests come less than a year after Miller had a landmark free speech victory in the UK Court of Appeal after police visited him over a tweet and told him he&rsquor;d committed a “non-crime hate incident.” The Court of Appeal ruled that the police&rsquor;s practice of recording “non-crime hate incidents” was unlawful and earlier this month, the UK&rsquor;s College of Policing responded to the ruling by updating its guidance and telling the UK&rsquor;s police forces to focus on real crimes instead of “offensive” tweets.

Fox documented the arrests in live Twitter videos and five officers were on the scene when the man was arrested.

In the first video, which Fox streamed before the man was arrested, Miller and Fox tell several police officers that they have posted the same Progress Pride flag swastika image and that the image has also been printed by The Daily Mail. Fox suggests that the police will “have to arrest all of us” if they arrest the man for posting the image on Facebook.

In the second video, the officers tell Fox and Miller that the man is under arrest and refuse to discuss what the man is being arrested for. Miller accuses the officers of breaching the law because they failed to caution the man while Fox claims they&rsquor;re being a “political police force.” One of the officers also accuses Fox of obstructing the arrest and threatens to arrest him. Miller is subsequently shown being arrested for obstructing the police and locked in a police van.

In the third video, the police prepare to arrest the man while Miller remains locked in the police van.

In the fourth video, the man is arrested while Fox describes the arresting officers as “brown shirts,” “the Gestapo,” and “the Stasi.” Fox also blasts the police for targeting “innocent, normal civilians in this country” and describes their behavior as “anti-British.” One of the police officers says that “somebody has taken offense” to the image the man posted on Facebook, claims that the image is “homophobic,” and describes the man as “a suspect for a crime.”

Hampshire Constabulary said in a statement that the officers were “acting in good faith after being deployed to investigate the report of an offensive image being shared online.”

“Policing reports in relation to online content is a complex and challenging picture,” Hampshire Constabulary added.

Donna Jones, the Police and Crime Commissioner for Hampshire and Isle of Wight, acknowledged that the man who posted the Progress Pride flag swastika image had been arrested for “malicious communications” following a complaint from a member of the public of an “alleged hate crime.”

Jones also expressed concern about the “proportionality and necessity” of the police’s response to the incident.

“When incidents on social media receive not one but two visits from police officers, but burglaries and non-domestic break-ins don’t always get a police response, something is wrong,” Jones said. “As Police Commissioner, I am committed to ensuring Hampshire Constabulary serves the public as the majority of people would expect. It appears on this occasion this has not happened.”

Jones added that she will be writing to the UK College of Policing to make them aware of the incident and “encourage greater clarification on the guidance in order to ensure that police forces can respond more appropriately in the future.”

Days before the man was arrested, Miller wrote in an article for The Critic that the police had previously visited the man three times – once for this Facebook post containing the Progress Pride flag swastika image, once for a joke about British diver Tom Daley&rsquor;s knitting, and once for reposting a Hitler in a bunker meme.

Miller claimed that during their previous visit about the Progress Pride flag swastika image, the police had attempted to get the man to sign a Community Resolution Order – a document that can be signed to resolve “a minor offence or anti-social behaviour incident through informal agreement” and requires a person to make “a clear and reliable admission” of guilt.

Miller also accused the police of trying to “shakedown” the man during this visit by offering to downgrade the crime to a “non-crime” if the man agreed to pay £60 ($73) and attend a Community Awareness Course that would give him “a mental toolbox that will enable him to keep out of trouble in the future.”

Additionally, Miller claimed that the police suggested the man have comments and memes signed off by his neighbor before posting.

Fox said that the man had contacted The Bad Law Project, a group that challenges various instances of “good law turned bad,” before the day of the arrest because he was worried about police turning up at his front door. Miller and Fox then waited at the man&rsquor;s house and Fox streamed the arrival of and interactions with the police officers.

Fox was suspended from Twitter last month for tweeting the same Progress Pride flag swastika image that the man was arrested for posting. After Fox tweeted the image, a UK politician urged the police to take action against Fox and claimed that posting the image was a “hate crime.”

This incident comes days after another UK police force, Wiltshire Police, sent two officers to the home of women&rsquor;s rights campaigner Kellie-Jay Keen because someone complained that one of her videos was “being untoward about pedophiles.” The police subsequently admitted they went too far and said their response was “not wholly proportionate.”