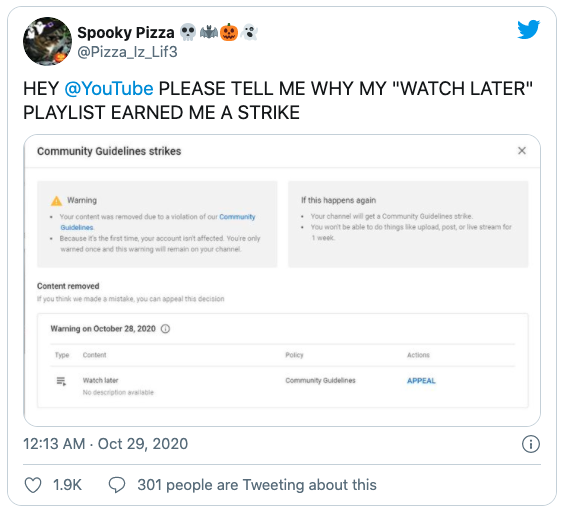 In response, other Twitter users overwhelmingly criticized the company for reaching for censorship of private lists that contain videos that themselves apparently remain on the platform without earning any warnings or strikes?

While this sounds like just another method YouTube might be using the curb the spread and visibility of certain videos it doesn’t like, without directly blocking them, the reply that came from the company directed users toward its Community Guidelines, noting that “all contents on the platform are constantly scanned to make sure that they follow our policies.”

As we have come to expect from YouTube, it’s an “explanation” that’s as clear as mud.

The user who initially complained was rather relieved that this wasn’t an actual strike, that could have eventually led to, or contributed to the shuttering of the entire channel. In this case, the appeal has been accepted, but the YouTuber warned others who are already in danger of being banned on the platform to “purge” their playlists of any content that YouTube might strike as a violation of Community Guidelines.

“Even a false strike can do a lot of damage,” the YouTuber wisely observed, while the entire exchange on Twitter showed that quite a bit of fear and anxiety go into being a creator on Google’s market-dominating video platform these days.

One Twitter, a user responding to all this said, “I’m off to remove everything on my private watch later list and to never ever use it again,” to which others replied ironically that this may not be enough and that all playlists may have to be gone, as a precaution to protect their channels, and that the “purge” might have to include even the liked videos. What if something that passed off as humor today becomes offensive to some group tomorrow, and YouTube decides to start issuing warnings? 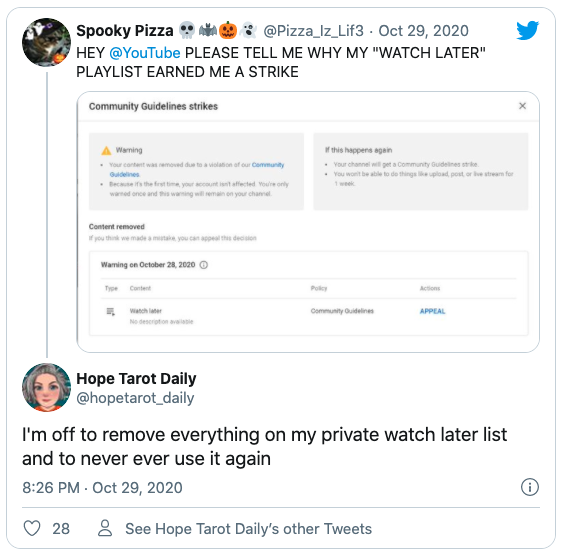 But others were less prone to making jokes, (though the policy does appear absurd in the lengths the giant is prepared to go to impose absolute control over its users).

To them, the whole thing is reminiscent of a dystopian nightmare – a form of “pre-thought-crime filtering,” if you like. 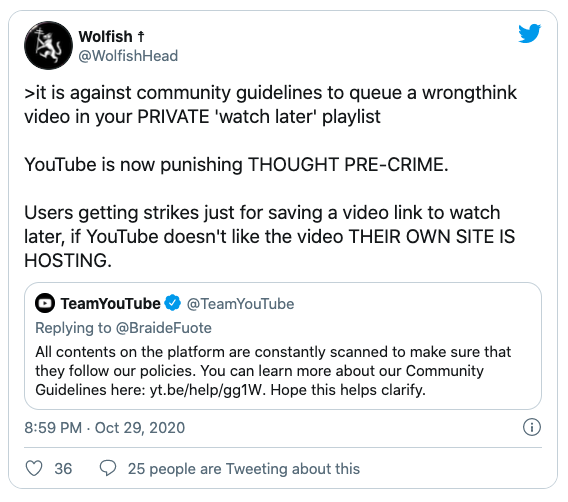 This isn’t the first time YouTube has been doing this. Last year, the Big Tech giant issued a strike against against a user for a playlist that didn’t even contain any of her own content.