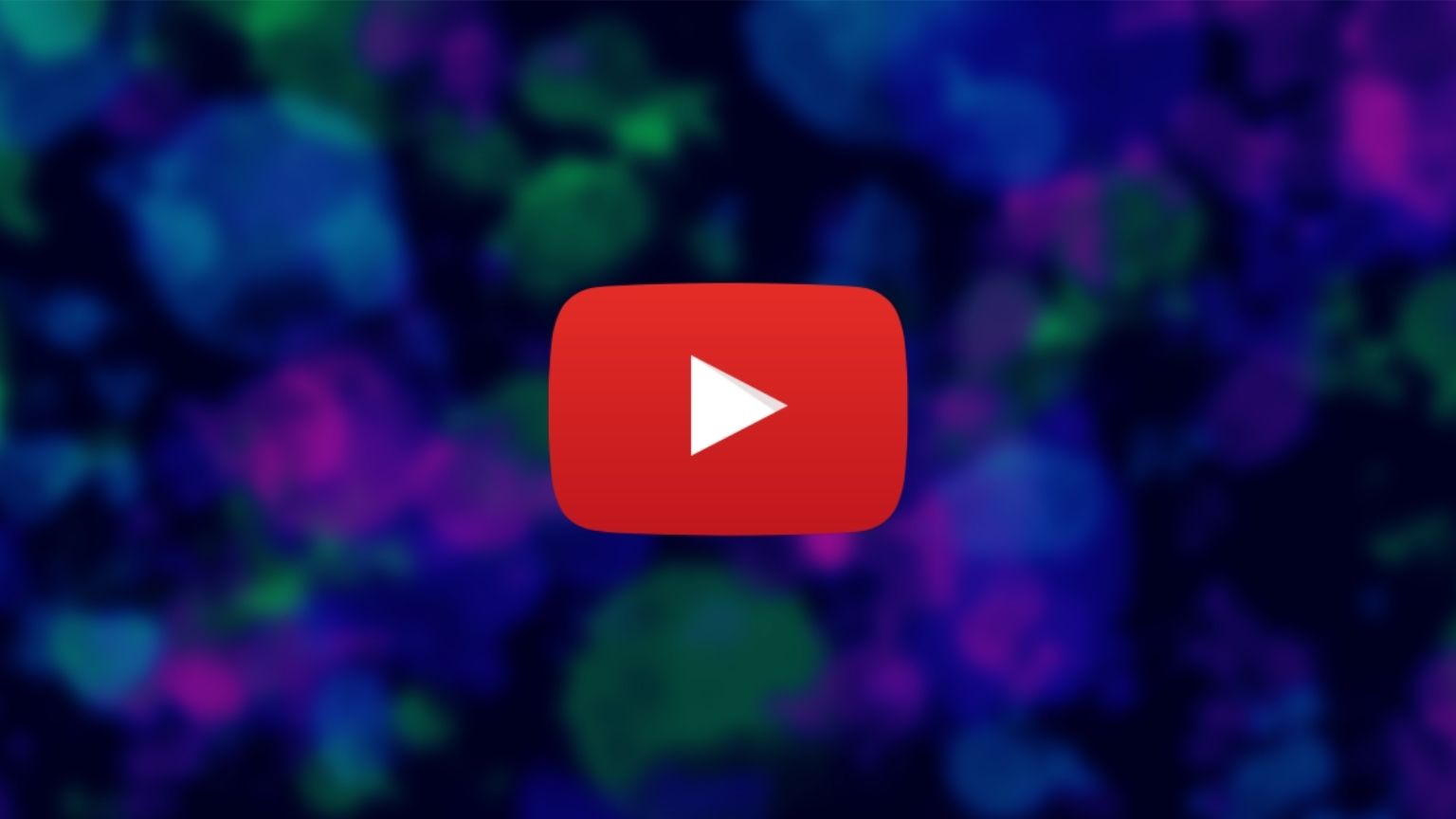 YouTuber TechDoctorUK is battling with YouTube’s rules prohibiting discussions about escaping having to pay for services and content. YouTube has issued strikes against the YouTuber’s content because his video reviews of completely legal apps that are literally available on Google Play that can offer ways for users to bypass paying for content.

With 223K subscribers and 12.7 million channel views, TechDoctorUK is known for his video tutorials. A couple of years ago, these included presentations on piracy apps such as Mobdro and Showbox but to avoid falling foul of YouTube’s content rules, these were all deleted and these days he says he only uploads tutorials for legal applications.

However, this shift doesn’t appear to be helping the YouTuber much. In numerous complaints directed to YouTube on Twitter, he explains that on at least five occasions YouTube has flagged his tutorials as breaching content guidelines, something which resulted in strikes against his account.

“I have received strikes for doing a review on Xumo TV, Pluto TV and others. All of which are completely legal. Fortunately, after tweeting TeamYoutube, they did remove the strikes,” he informs TF.

Known for his video tutorials, TechDoctorUK boasts 223K followers and 12.7 million channel views. He originally featured video content for pirate apps like Mobdro and Showbox, but all of them soon disappeared to comply with YouTube’s content regulations, and now he only publishes videos for legal programs.

Despite this change, it does not appear to help the YouTuber in any way. On at least five occasions, he claims, that YouTube has reported his tutorials for breaking content standards, which resulted in strikes against him. 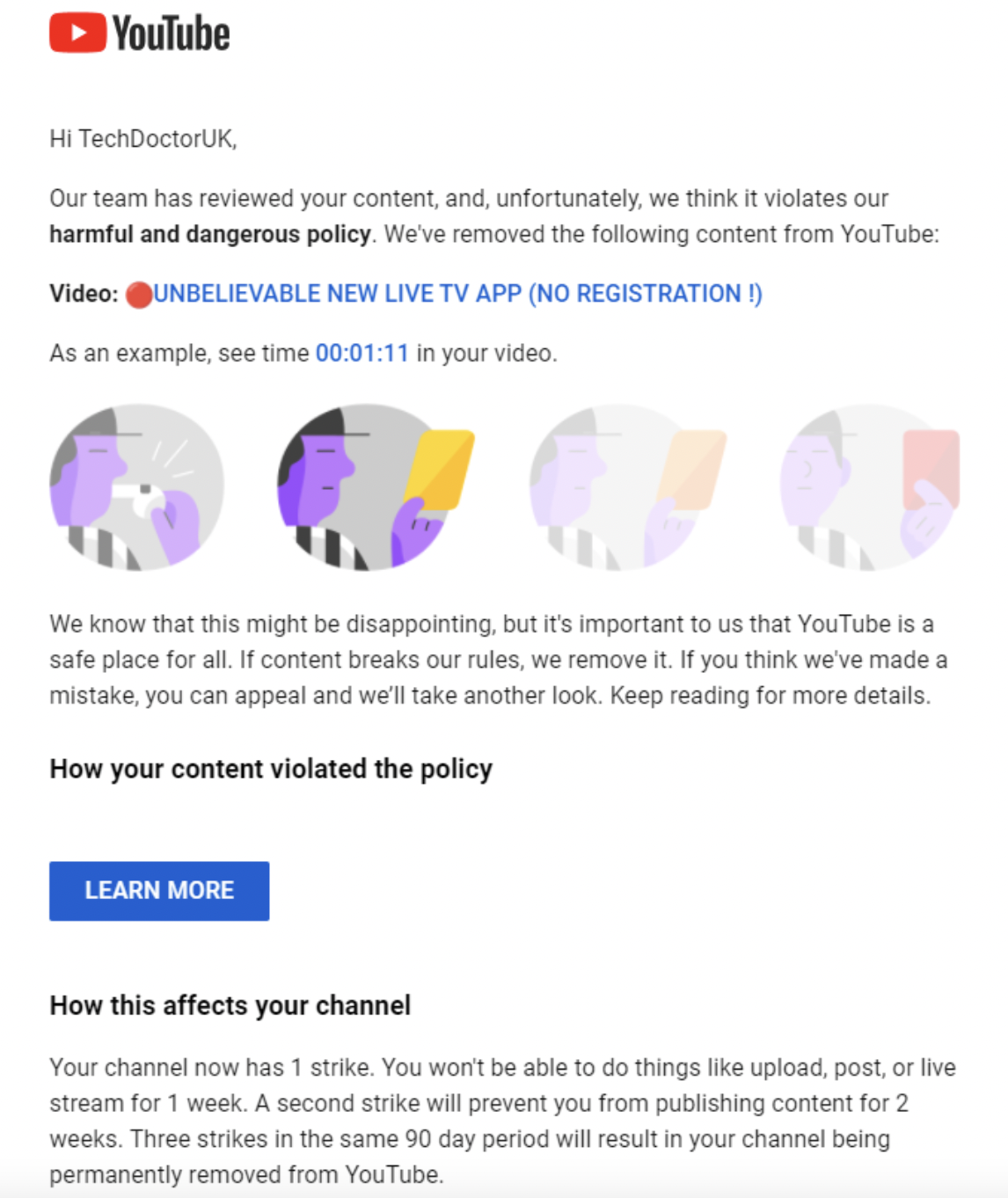 TechDoctor UK’s review on Pluto TV had been flagged, with it taking a few days before it was reversed by YouTube. Another strike occurred on a video on Firestick manager and it was a series of appeals, rejections, and reversals between both parties.

Yet again, Youtube flagged his content on a review on an app called Teleboy for violating policies.

Following TechDoctorUK’s protests about the strike, his complaint was denied again after two minutes and it’s still unclear whether YouTube will lift its ban or not. YouTube has stated that the policy staff is still reviewing his content. 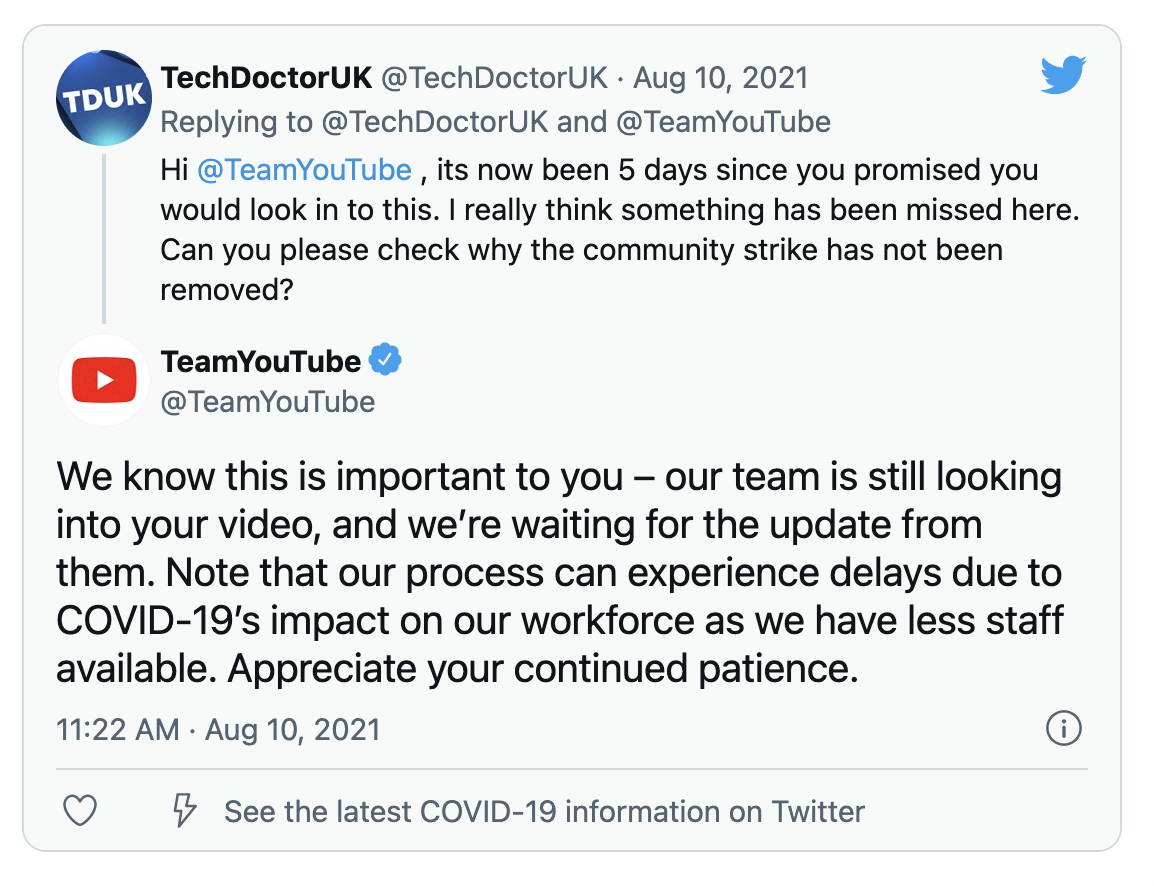 “We know this is important to you – our team is still looking into your video, and we’re waiting for the update from them. Note that our process can experience delays due to COVID-19’s impact on our workforce as we have less staff available. Appreciate your continued patience.” – TeamYoutube (@TeamYoutube ).