The ACLU is doubling down on its new brand.
Share 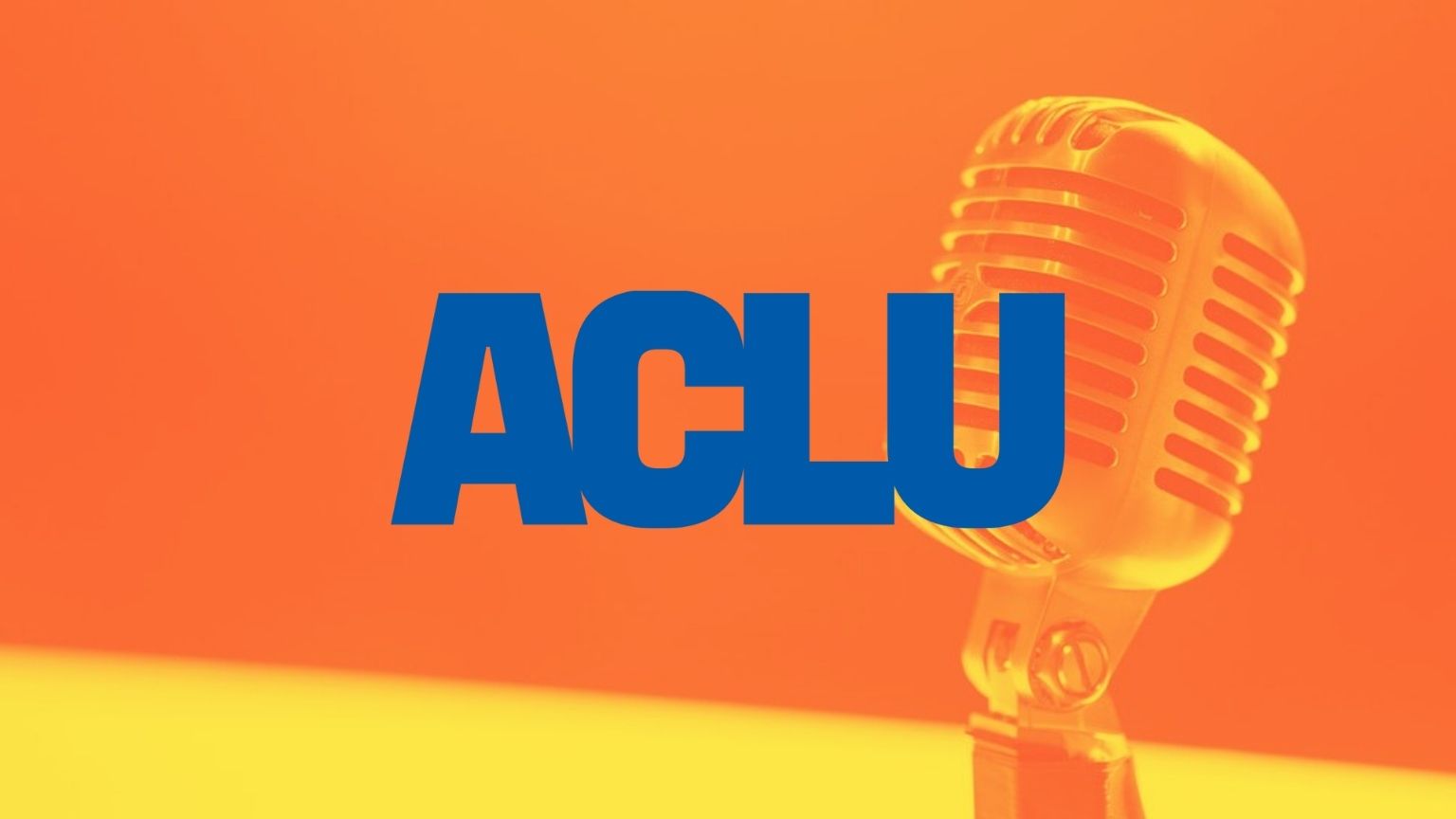 Instead of defending free speech, the American Civil Liberties Union has defended a school board in Virginia, which is facing a lawsuit from three teachers who got fired for refusing to use transgender students’ preferred pronouns.

“BREAKING: Three teachers in Loudin county are going to court simply because they don’t want to use trans & nonbinary students’ pronouns,” ACLU of Virginia wrote on Twitter. 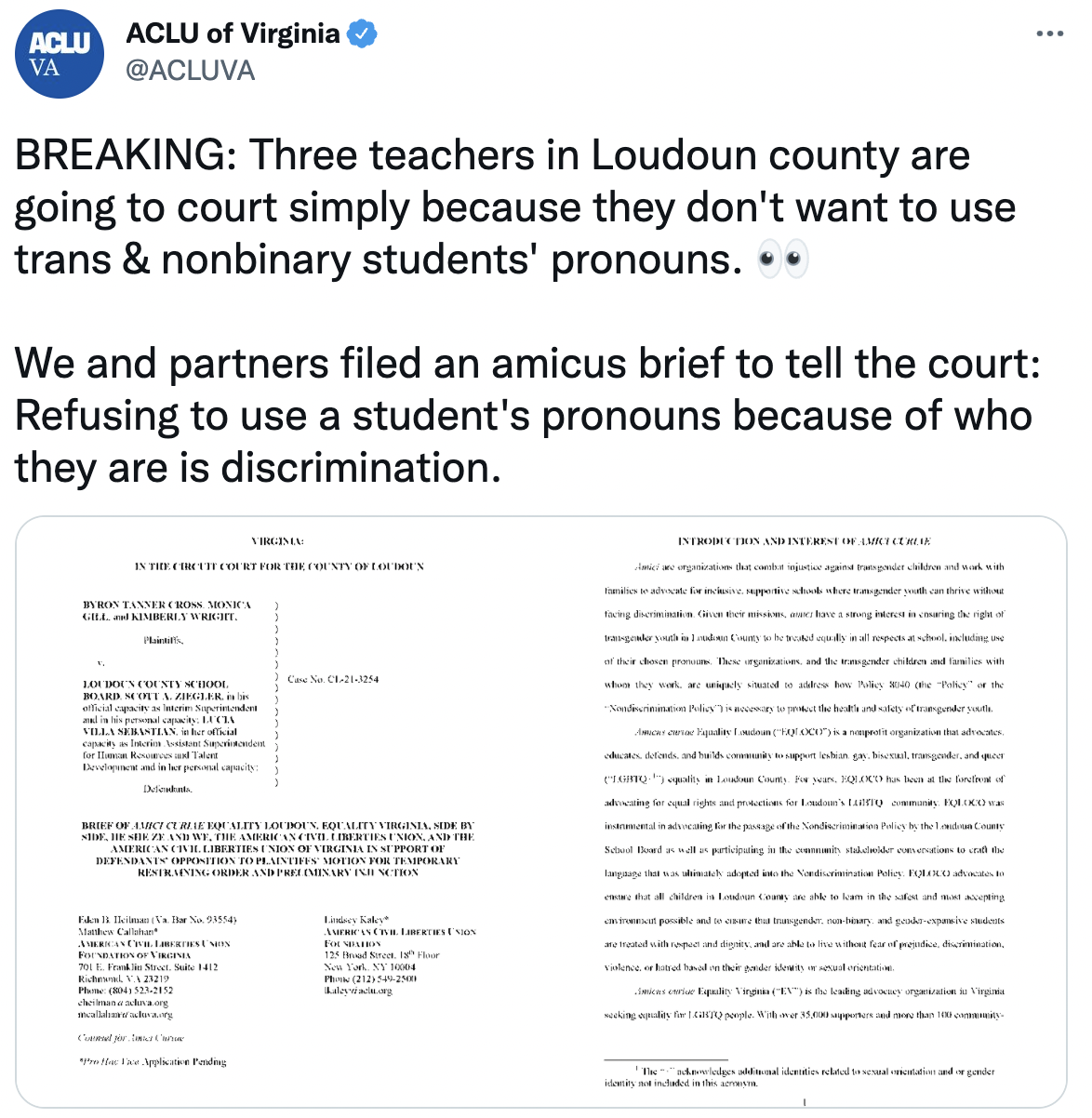 “We and partners filed an amicus brief to tell the court: Refusing to use a student’s pronouns because of who they are is discrimination.”

The Loudoun County school district, in Virginia, passed a policy forcing staff members to use the pronouns preferred by a student. In May, a teacher, Byron Cross, refused to comply with the policy, and was placed on administrative leave.

The policy states that staff in the school district “shall allow gender-expansive of transgender students to use their chosen name and gender pronouns that reflect their gender identity without any substantiating evidence, regardless of the name and gender recorded in the student’s permanent educational record.”

It adds that “School staff shall at the request of a student or parent/legal guardian… use the name and pronoun that correspond with their gender identity.”

Cross sued, and has since been reinstated as the lawsuit continues.

ACLU’s brief claims that: “The Policy includes provisions requiring teachers to use students’ gender-affirming pronouns, which is crucial to the mental health and well-being of trans and gender-expansive children.”

The organization added that teachers should not violate the policy because it “protects trans and gender-expansive students from discrimination, and necessitates equal treatment of all students in Loudoun County.”

“We know that discriminatory practices,” the ACLU writes, “…such as the refusal to use a student’s gender-affirming pronouns, can exacerbate gender dysphoria and harm socio-emotional development during critical childhood years. Policy 8040 ensures that trans and non-binary students can focus on their education without the added stigmatization, stress and anxiety of being misgendered by their teachers.”

Following the ACLU’s filing of the brief, some have noted that it has stopped being a defender of free speech rights and is now arguing for compelled speech and limitations of the First Amendment.

“The ACLU was a crucial influence on my political and legal outlook in childhood and early adulthood,” wrote Glenn Greenwald. “There have been many valid criticisms of them as they changed – including from former leaders – but to see them explicitly urging more free speech restrictions is shocking.” 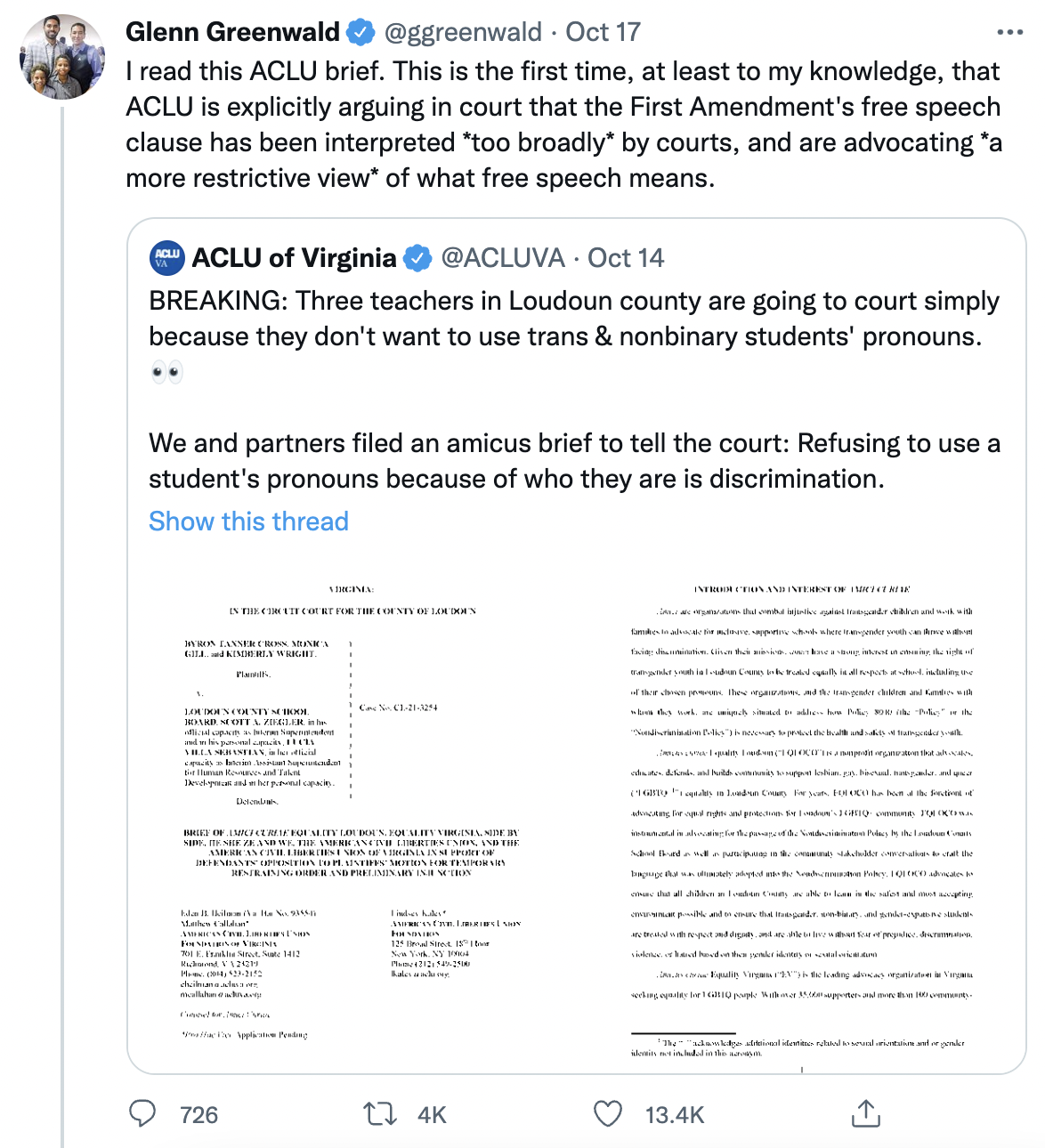